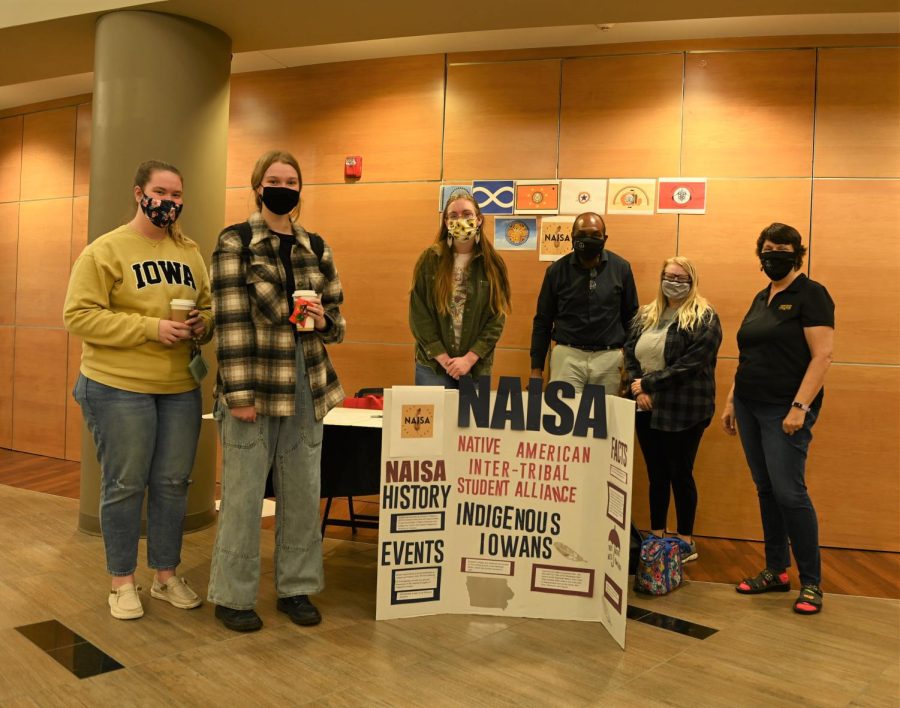 “The Federal Government has a solemn obligation to lift up and invest in the future of Indigenous people and empower Tribal Nations to govern their own communities and make their own decisions.  We must never forget the centuries-long campaign of violence, displacement, assimilation, and terror wrought upon Native communities and Tribal Nations throughout our country.  Today, we acknowledge the significant sacrifices made by Native peoples to this country — and recognize their many ongoing contributions to our Nation,” President Biden stated in his proclamation.

The resolution also called for the Simpson community to reflect on the ongoing struggles of Indigenous people on this land, celebrate native culture, and celebrate the values that Indigenous people add to our campus, including current students with Navajo, Wampanoag, Hawaiian, Cherokee, Blackfoot, Apache, CHamoru, Métis and other Indigenous backgrounds.

NAISA members also made a quiz about Native American history for visitors to take, which shared lesser-known information

Walter Lain, Assistant Dean of Multicultural and International Affairs, says that it’s important to acknowledge that there are students on campus with Indigenous roots.

NAISA co-president Noah Trujillo shared that he recently got in touch with his Apache heritage over the summer. He joined NAISA to learn more about his roots in addition to spreading awareness of Native American and Indigenous issues on Simpson’s campus.

“The United States is becoming more and more culturally diverse, and I think it’s important to hear all of the different voices and unique experiences that everyone has,” Trujillo said. “I think it’s great to have a group that can kind of help you kind of regain your identity or understand who you are as a person more.

Trujillo spoke about how the cultures and historical impacts of Indigenous people have been largely overlooked in our post-colonial and industrialized society.

“NAISA focuses on communities that existed in America before colonization, and they have oftentimes been swept under the rug in contemporary and historical media and our culture as a whole,” Trujillo said.  “So I think it’s important for us to bring that back to the forefront so we can give these groups the respect that they deserve, and the respect they’ve been locked in for the past few years.”

In addition to celebrating Indigenous Peoples’ Day, NAISA has plans to host more events throughout the year. One plan of emphasis is to establish a formal land acknowledgment for Simpson College; Indianola resides on the hunting territory of the Meskwaki Nation (also known as the Sac and Fox Tribe), who were forcibly removed from their land in 1845.

NAISA also plans on hosting a Thanksgiving Dinner—one that aims to shed a more historically accurate light on how the Thanksgiving holiday came to be.

“We plan to have a Thanksgiving recognition event that honors Native culture. We’ll have students get together to celebrate what it means to be here in terms of how the original Thanksgiving may have gone,” Lain said. “It’s going to be partially educational, as well as an opportunity for us to celebrate the fact that Simpson College recognizes Indigenous contributions and the contributions of students here on campus.”

Sophomore Karlie Hill stopped by the NAISA table and enjoyed learning more about Indigenous history and feels groups like NAISA are needed on college campuses.

“I think groups like NAISA are good to have on a small campus because it’s just a place for anyone to go and learn, whether they are Native American or not,” Hill said.  “It shows that you’re welcome to have a place where others might understand you or things you’ve gone through.”

Members encourage students of all backgrounds to join NAISA.

“The great thing about NAISA is that it’s not restricted to people who are Indigenous or Native American either, anyone can come and learn,” Trujillo said. “I think it’s just a great experience to kind of help build up a community that really hasn’t been there.”