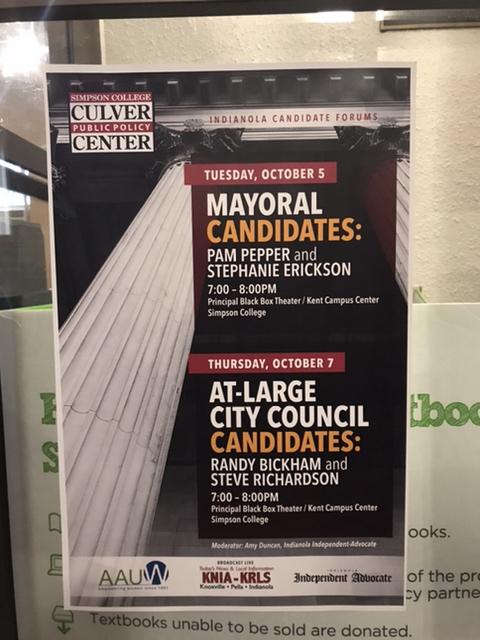 Ahead of the special election, Indianola’s mayoral candidates spoke to the community about their visions for the city’s future, responded to concerns, and discussed their plans should they be elected mayor.

Incumbent Mayor Pamela Pepper said she would bring experience and active engagement if elected again. Collectively, Pepper–who has a Master’s degree in public administration–has served as part of Indianola’s government for 20 years.

Pepper was a city council member for seven years, part of the planning and zoning commission for 12 years, and recently Pepper has been serving as mayor of Indianola for 11 months.

When looking toward the next 20 years, Pepper said she wants to see further economic development in Indianola, noting thus far growth has been done in a planned and smart way to avoid growing too quickly. When it comes to attracting diverse residents and backgrounds, Pepper said a multifaceted approach was needed by offering well-paying jobs, affordable housing and amenities.

Mayoral candidate Stephanie Erickson, who moved to Indianola with her family in 2018, wants to bridge the gap between Indianola’s citizens and the city council. Economic development is also a focus of Erickson’s campaign; attracting businesses to Indianola, for example, and balancing taxpayers’ burden are part of this platform. For Erickson, attracting diverse residents and workers meant investing in the community and bringing in more jobs.

“It’s also important that we grow with that strategy, that we’re looking at the parts of our city that can grow, and we are being smart in our housing,” Erickson said. “Currently, we have a development going up with five homes, and next to them will be $400 – 600,000 homes. Even though it’s affordable, I think that we can bring in better developers and still have affordable housing.”

Each candidate also explained why they chose to run for mayor rather than a position on the city council, how they prepared for the mayoral position, as well as responded to concerns regarding investing in the community, delayed progress on major projects, and whether too much is being spent.

Erickson affirmed that projects have been delayed but also noted that money needed to be spent to invest in important infrastructure projects in the community, such as heating and cooling.

“I think that’s a great question,” Erickson said, “and there’s not a simple answer there for me because I see both sides. And I am certainly very fiscally responsible, so yes, I think we are spending a lot of money that doesn’t need to be spent. But we’re also spending wisely. I’ll never debate that infrastructure on the square needed to be updated, but my debate was on the extra things.”

For Pepper, infrastructure–such as waste-water treatment and the streetscape–is also an issue, one that can be addressed with the city council’s cleaned-up budget. The city council, she said, needs to make smart decisions rather than be reactive.

“We now have good data. We have a strong budget. We have strong reserves. And with that money, we have a fabulous bond rating, which allows us to borrow money very inexpensively to make these changes,” Pepper said. “So, I think that we have all avenues of where we can improve, and how we can do it in the best possible way to make this a very desirable community to live in.”

Both candidates also discussed transportation, energy conservation and sustainability in Indianola, their experiences in collaborating with others, searching for a new city manager and issues they would advocate for at the state legislative level, which for Pepper would be rollbacks and for Erickson would be access to mental health services.

The Indianola mayoral forum was moderated by Amy Duncan with the Indianola Advocate and was hosted by Culver Center Executive Director Seth Andersen. The event was also sponsored by the American Association of University Women, the John C. Carver Public Policy Center, the Indianola Independent Advocate, and KNIA/KRLS Radio.

Another forum for the at-large city council candidates Randy Bickham and Steve Richardson is scheduled for 7:00 p.m. on Oct. 7 in Black Box Theater, Kent Campus Center.