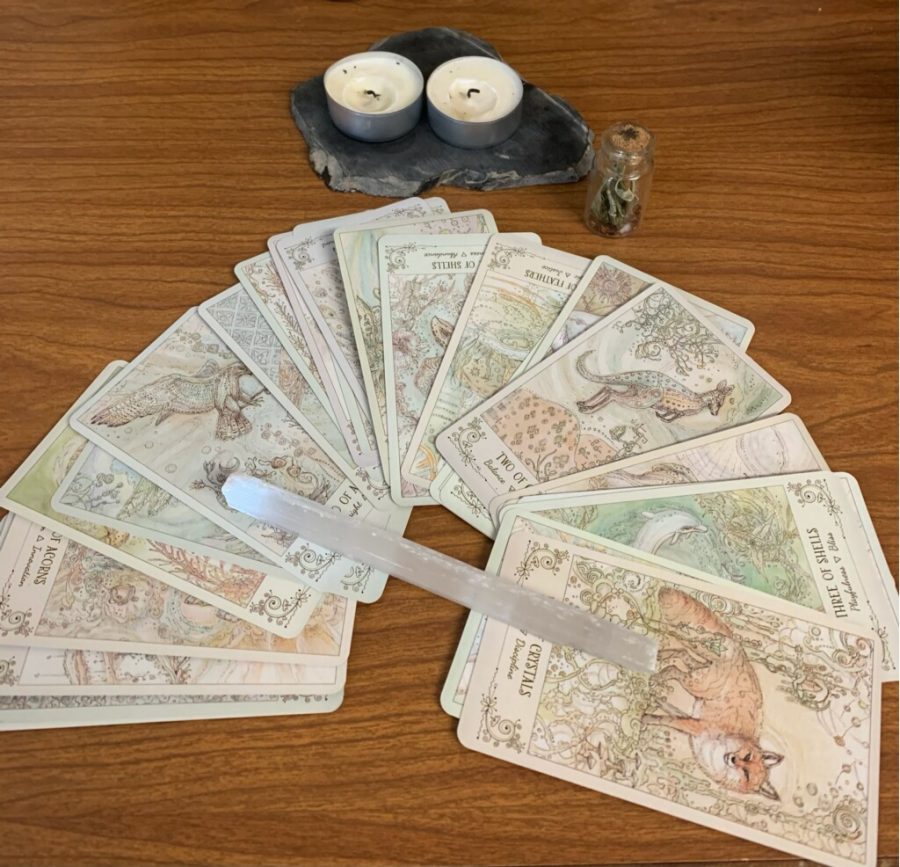 The coven on Simpson’s campus serves as a safe space where students can exchange spiritual knowledge and items, such as Tarot ca

Many campuses, including Simpson College, are seeing an increase in the number of students who identify as pagan, Wiccan, or a witch.

This fall, Simpson’s first coven was founded, providing a place for students interested in paganism, witchcraft, Wicca and related spiritual identities to practice together and exchange knowledge.

Paganism is a general term for various religious traditions, beliefs, and practices. Wicca is a nature-based religion, and witches are those who practice witchcraft and magick; however, each person practices paganism, Wicca, and witchcraft differently.

The word magic refers to fictional practices, while magick refers to non-fiction practices.

Students may read Tarot, use gems and stones, learn spells, or celebrate holidays together during meetings.

“I’ve seen an increase in the types of groups offered to support these religious/spiritual identities, but I’m not sure of how many campuses might host a coven rather than connect with outside/pre-existing groups in the larger community,” Chaplain Mara Bailey said.

Senior Tatum Clayburn has always been interested in witchcraft but spent more time dedicating herself to her practice over quarantine.

Clayburn said she identifies as an eclectic pagan/witch.

“I pull a little bit from everywhere,” Clayburn said.

During the coven’s weekly meetings, members share their practices and exchange knowledge.

“This past week, I believe, they talked about banishment and protection,” Clayburn said. “Everyone talked and exchanged what they did. And then I think in the upcoming weeks we’re going to talk about Tarot and stuff like that because everyone has a little specialization and different things, and we want to make sure not to step on anyone’s toes.”

Bailey said that it became clear that a growing number of students on campus were interested in these practices and wanted to find a safe space to continue to learn.

Hosting something on campus, like a coven, allowed for a smaller community for students to meet and feel safe to express their religious beliefs without making it known to the public.

Some members of the coven said they struggle with feeling safe to express their religious beliefs – some worry that their families will not accept their beliefs or that they may face scrutiny from their peers. Due to this, the coven seeks to provide a small safe community for its members.

“Hosting something on campus where a lot of intentionalities could be focused on learning about these traditions and practices in a safe environment and accessible to students seemed really important,” Bailey said.

The coven meets in the evenings – either on Tuesday or Wednesday, but it can vary depending on student schedules.

There are currently between 10 and 15 students participating in the coven each week. Interested students can reach out to Clayburn, Bailey or email the religious life community at [email protected] to be added to the group chat for more information and meeting times.

“Any student is invited to attend, as long as they respect the purpose of the space,” Bailey said.