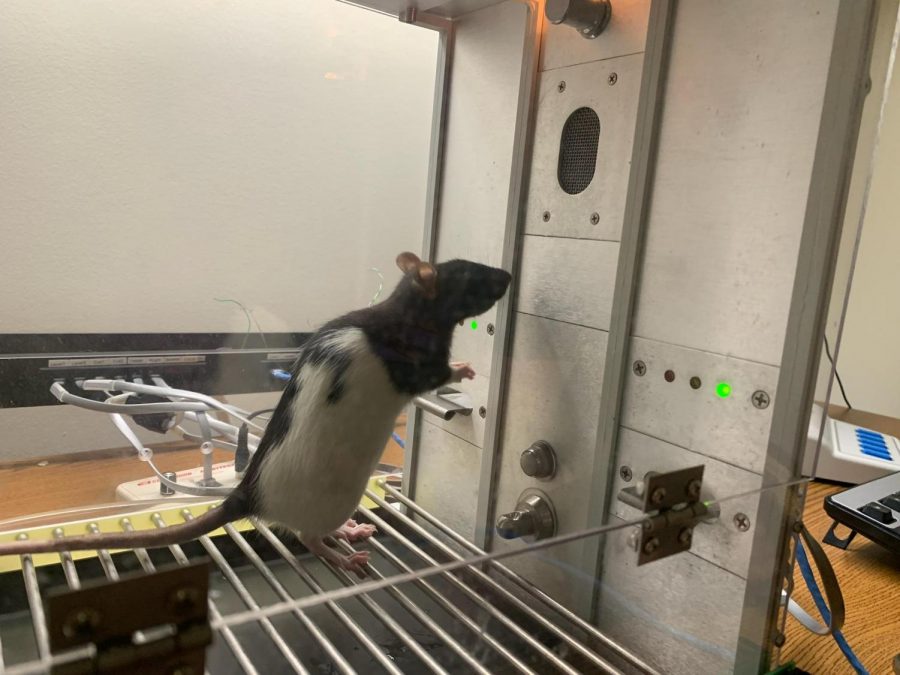 Anneka Finn and Amelia Schafer share a rat, Rat-chel Ray, who is learning how to use a lever press through classical conditioning. Each time Rat-chel presses the lever, a drop of flavored water is released for her to drink

Simpson College’s Department of Psychology has 10 lab rats that assist students with research methods in the PSYC-331 Learning and Behavior course.

“The reason I use the animals for that class is because they absolutely demonstrate what we are trying to teach in the class. It’s one thing to read about something. It’s quite another to actually reproduce it, which is what we can do in labs with the rats,” Evans said.

Students taking PSYC-331 Learning and Behavior study behavior patterns, which can be reproduced in a more hands-on method in the lab with the rats.

“In general, what we talk about in class and predict that the rats will do, they absolutely do it,” Evans said. “That’s really a powerful learning procedure.”

According to research conducted by the Smithsonian Magazine, lab rats and rodents have been used in research for more than 150 years. Evans shared that he himself took a class similar to PSYC-331 when he was an undergraduate psychology major. He said that the department has used rats for approximately 20 years.

The department of psychology partners with Charles River Laboratories in Wilmington, MA, which supplies animals for research and teaching. The rats are initially shipped to the Department of Biology and Environmental Science before Evans places them in their respective lab homes.

“When they come they’re only about 20 days old, and they weigh maybe somewhere between 35 and 50 grams,” Evans said. “Three or four weeks later, we start working with them, then they weigh 300-something, so they grow pretty quickly.”

“I think that working with the rats is a great hands-on learning experience,” Finn said.  “We get to see how the things we are learning in class actually work.”

All students taking the course have the option to adopt their rats at the end of the school year; students doing independent research projects involving the rats may adopt them as well.

“If I had a source of good homes for the rats, I’d adopt them all out,” Evans said. “There just aren’t enough people who want them, and local stores or animal shelters actually have too many of them.”

Evans also shared that anyone who expresses interest in adopting a rat can contact the department for a potential placement. Rats who do not find a home outside of the lab at the end of the year are euthanized.

“One year, I tried to use an animal placement kind of operation, but we can’t do that anymore, because we just can’t place that many rats. Ideally, they’d all be adopted, but some of them aren’t. None of us really like talking about that too much,” Evans said. “It’s one of those things where the alternative would be to not be able to use animals, and I think that would be shortchanging the students that take the class.”

The department carefully complies with the Institutional Animal Care and Use Committee—an agency under the National Institute of Health that oversees and ensures appropriate, ethical review of the use of animals in teaching, testing and research.

Before Evans became a college professor, he worked as a clinical therapist. He feels the PSYC-331 course is vital to students looking to explore therapy work post-graduation.

“Learning and Behavior is one of the most important learning and foundation classes that I used and applied in my therapy practice,” Evans said.

“It’s just really applicable to the practice setting. So yeah, I think it’s an important course, and it’s unfortunate that we can’t find good homes for all the rats when we’re done,” Evans said.

Camrey Leo graduated from Simpson last year with a degree in Psychology and Criminal Justice. She is one of many PSYC-331 students who chose to adopt their lab rat, Fiona, after finishing the course.

“I adopted her because I was told they were euthanized after the school year. I am a huge animal lover and honestly bonded with Fiona throughout the semester,” Leo said. “Having rats in the lab helped because we had to really think about what we were doing; we had to plan out our experiment and write weekly lab reports over what we had trained the rats, which came with ease considering we were the ones who did the experiment/training.”

Leo says Fiona has socialized quite well in her new home since being adopted from the lab.

“Fiona loves people,” Leo said. “She was very shy when I first brought her home last November, but she now is very comfortable around me and my family. I have little nephews who love to play with the rats and Fiona is always the first to come out and see them.”

Leo has enjoyed keeping Fiona so much that she’s since adopted three more rats; Poppy, Sugar and the most recent addition, Peanut.

“I loved her [Fiona] so much I decided to adopt her cagemate at the end of the year, who I named Sugar,” Leo said. “Overall, I am so thankful to have taken the class because I gained some furry friends out of it.”

Students interested in taking PSYC-331 or learning more about the lab rats can visit the Department of Psychology’s website at: https://simpson.edu/academics/departments/department-psychology.