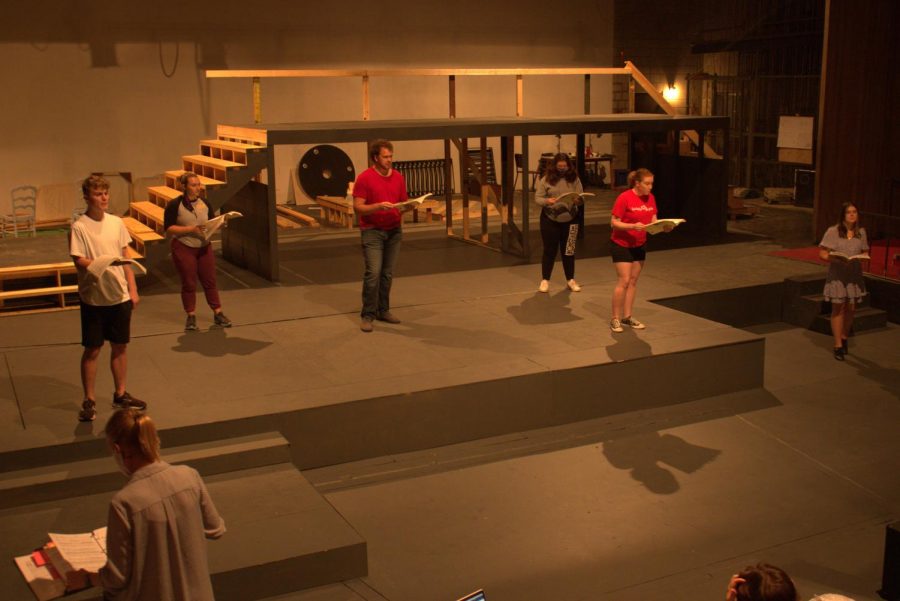 Members of Simpson Productions rehearse for their two upcoming performances: “The Enchanted Pig: A Musical Tale” and “As You Like It.”

After a year of online recordings, in-person shows are back at Simpson Productions.

This fall, audiences can look forward to two shows for the fall semester.

First will be “The Enchanted Pig: A Musical Tale” with music by Jonathan Dove and lyrics by Alasdair Middleton.

“The Enchanted Pig: A Musical Tale” tells the story of a princess named Flora who must wed a pig from the north. The pig is enchanted, but as soon as Flora finds him, she loses him. To find him, Flora must trek the ends of the earth and eventually into the sky. Can Flora break the curse that is bound to this prince?

Tickets are available on the Simpson production’s Facebook page or Eventbrite. Adult tickets are $20, seniors and non-Simpson students are $17.50, and group tickets (10 or more tickets) are $16.00.

“The opera is a 21st-century piece that will have great appeal for all audiences,” director Jennifer Nostrala said.

The show’s conductor and musical director are Bernard McDonald.

The second show this fall will be “As You Like It” by William Shakespeare.

Lagundino has worked on numerous shows like “Macbeth,” “Noises Off,” and others. He is a teacher, actor, director and producing artistic director of Theatre Alaska.

Lagundino said he believes this show will bring the spotlight to powerful female characters.

Lagundino said he hopes “As You Like It” will bring laughter to an audience that has been stuck at home this past year.

“As You Like It” is a tale that follows Rosalind, who has fallen in love with Orlando. Unfortunately, Rosalind, her cousin and the Jester must flee to escape prosecution in her uncle’s court. Rosalind, who is disguised as a male shepherd, finds herself in the Forest of Arden. This classic Shakespearean play will take place in Iowa, so audience members can prepare to see some familiar scenery in this production.

Be sure to keep an eye out for “Guys and Dolls” and “Fefu and Her Friends”, which will premiere in the spring semester of 2022.