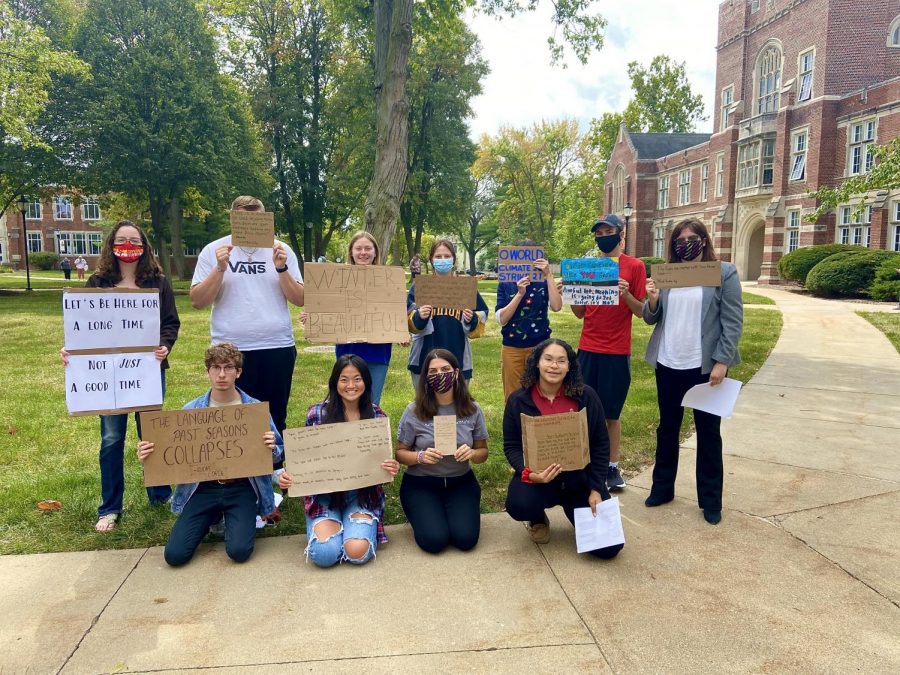 Students around the globe ditched their textbooks to participate in Fridays for Future’s climate strike. Among these students was Professor Eireann Lorsung’s literature matters class.

Fridays for Future is a youth-led climate strike movement started by 15-year-old Greta Thunberg in August 2018 after she began a school strike for climate.

According to Fridays for Future’s official website, their mission is to “unite behind the science and make those in power take the facts seriously, and act accordingly.”

Professor Lorsung said she believes a climate strike is in some ways a symbolic gesture.

“In times when we can feel deeply atomized and isolated, to do something—even in relative isolation—and know others are also making this symbolic gesture is hope-giving,” she said.

Lorsung encouraged students to join her in the strike during class time Friday, Sept. 24 to test the theory that “literature matters.”

Lorsung believes if literature matters, it cannot matter in the classroom alone because literature does not come from classrooms and it does not, for the most part, concern them.

“If literature matters, it will do something for us, to us, and through us there in the world as well as in the classroom,” she said. “I think literature has to be, and we have to understand it to be, intricately intertwined with the real, precious, complex shared world that can sometimes seem totally separate from the classroom.”

Senior Paige O’Connor says she has never participated in a climate strike before; however, she has taken part in several protests and strikes on campus in support of other important issues.

“Being on campus surrounded by other students who are fighting the same battle feels safe, and there is strength in such large numbers,” she said. “This is one of those activities that allows students to get out of their comfort zones to try and protect something that matters to them.”

O’Connor also stressed that change must start somewhere to ever be effective.

“It can be very hard for just one person or dozens to make a difference, but it all starts somewhere. We have to stand up for what we believe in and if that means you are uncomfortable, do it anyway. Change is a beautiful thing, and it is what this campus needs,” she said.

Despite not being enrolled in the class, Kylie Rae Torres, first-year class president, joined the group after hearing about the strike from a friend.

“I felt as though it was my duty as freshman class president to support such a cause, especially since I support the fight against climate change full-heartedly,” Torres said.

Both Torres and O’Connor said the strike was eye-opening, but not entirely for good reason.

“It was a very eye-opening experience to see how many people purposely avoided our group of students,” Torres said.

O’Connor also said people seemed to go out of their way to avoid interaction with the group.

While seemingly a small gesture, strikes like the one held on Friday open the floor to having difficult conversations and spreading awareness.

“I think some ways that students can spark more change on campus is by doing more walkouts and protests, using social media platforms in order to educate and spread awareness, taking time to learn on your own time and getting more people involved,” Torres said.