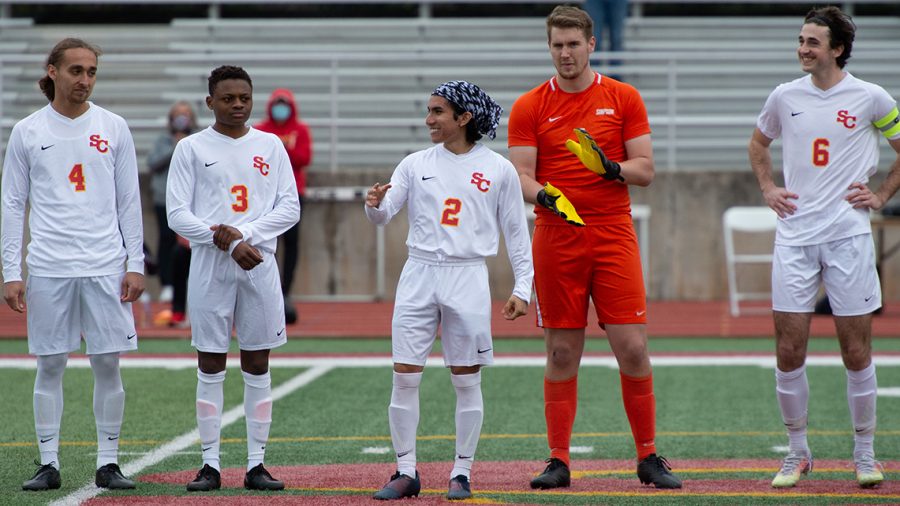 Junior Jordy Triana-Vasquez has scored five goals in the first two games of the season.

With his mark of four goals in a 6-1 victory over Augusta (Ill.) on Sept. 1, Jordy Triana-Vasquez accomplished a feat only done five times before in Simpson men’s soccer history.

Triana-Vasquez scored two separate goals in the box during the first half to give the Storm a commanding lead. In the second period, Triana-Vasquez achieved his first career hat trick on his third goal in the 71st minute, assisted by Matt Hasken. Then he put a penalty kick in the back of the net for his fourth goal of the night, placing himself in elite company.

In addition to his four goals, he also dished out an assist.

The junior from Clive, Iowa joined Rodrigo Siqueira, Alex Fonseca, Fabiano Rivero, Benni Zasendorf and Angel Salcido as the only players in Simpson history to score at least four goals in a single game. Salcido was the last to accomplish this feat in 2003 when he scored a school-record five goals against California Tech.

“I never thought it would actually happen,” Triana-Vasquez said. “But I’m thankful for my teammates, it wouldn’t happen without them.”

Simpson started off the season strong in their first non-conference game since 2019, taking care of business 6-1. The last time the Storm met the Vikings, Simpson won in a much closer game, 2-0. The Storm as a whole had an impressive performance.

“It feels really great,” Triana-Vasquez said. “I know all the boys were excited to get on the field, especially after a long (off-season). With all the preparation, we were just excited to get that first win.”

After Triana-Vasquez’ breakout performance in game one, the Storm midfielder responded in game two with one goal and one assist in a comeback win over Hamline in overtime.

With his performance against Hamline, Triana-Vasquez now leads the American Rivers Conference in goals with 5 and total points with 12. Of course, it’s early in the season, but Triana-Vasquez has gotten off to a faster start than any other player in the conference.

In addition to his standing within the conference, Triana-Vasquez has already matched his scoring total from last season, but he has done it in five fewer total games. Barring a significant change, he is poised to surpass his total from 2020 that landed him on the All-A-R-C team.

It’s only been two games, so a lot can change on the field, but if the trends from Triana-Vasquez continue, the Storm could have serious success in 2021.

“We are excited to kick-off the season and hopefully get a championship,” Triana-Vasquez said.