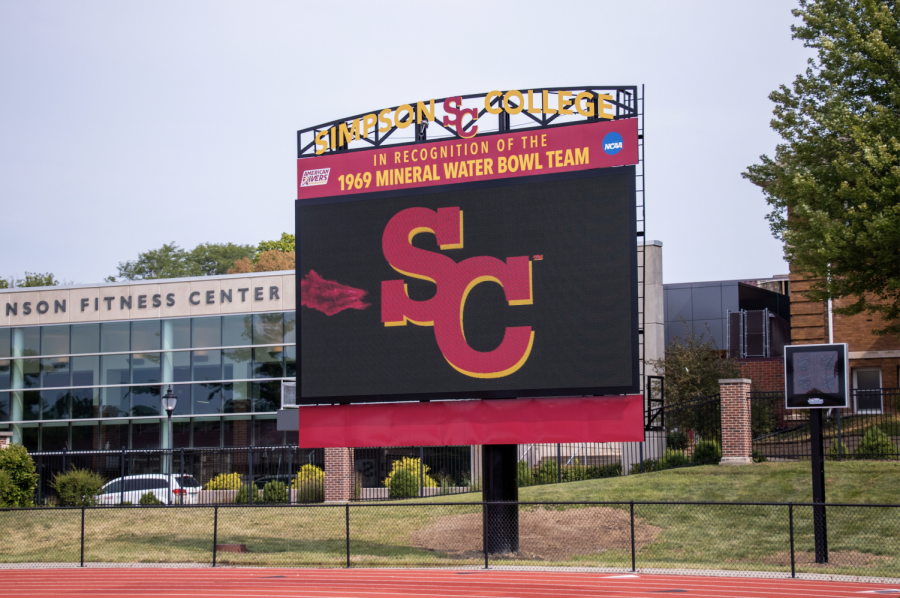 A new 15 by 28-foot video board was recently installed in Bill Buxton stadium.

Those walking past Bill Buxton Stadium will notice a brand-new addition to the 72-year old complex on Simpson College’s campus.

The video board was put up for use and display on July 16 and contains multi-sport scoring software and a multimedia LED video display.

The approximately 15 by 28 foot long video board has a 13.3 millimeter digital display and stands 14 feet tall.

The project was funded by donations from Simpson College’s 1969 Mineral Water Bowl team, or, the first and only Simpson football team to make a bowl game in the program’s history.

Senior Baliegh Nagy is undergoing her final soccer season and is excited for the new scoreboard features that the video board’s software provides.

“The video board has been a nice upgrade for the soccer team. We are definitely one of the few teams in the conference with a video board,” she said.  “It shows shot and save counts which we didn’t really get before, so that’s a big plus.”

This project is part of a series of improvements for Simpson’s athletic facilities, according to athletic director Marty Bell. He believes the stadium was due for a new scoreboard, as the previous one was dated and in need of repairs.

“On the [previous] board, the message part of it didn’t work, so it was in disrepair. The scoreboard worked, but some bulbs were out and it was hard to read the clock,” Bell said. “It was time for a new board anyways.”

Bell says the board also boosts the image of our athletics department.

“We’re upping our game, so to speak,” Bell said. “As we try to become more and more competitive, we have to create that perception. People may start realizing that there’s an efficient investment being made, which may deepen their investment in training.”

One of the upcoming developments for athletics include a new sound system. Bell estimates the sound system will be installed by September 20, 2021.

Bell shared that he also has visions for turf replacement, potentially turfing fields for baseball and softball, flooring upgrades for Cowles Fieldhouse, and much more.

“Part of my strategic vision includes facility upgrades, new sports, infrastructure improvements, etc… to really place ourselves in a different place across the board competitively, regionally and nationally,” Bell said.

Senior tight-end Cole Scott is excited for the new look that the video provides.

“I think it’s really exciting for football, personally. It’s good to see the scoreboard replaced with something new,” Scott said. “I think it will be really good for recruitment and just the campus overall. I think it’s a big upgrade that people will notice.”

Simpson fans can look forward to seeing the video board in action at the football team’s home opener this Saturday at 1:00 p.m against the University of Wisconsin-Stevens Point. Men’s soccer will cap the night off at 7:00 p.m. against Saint Mary’s University of Minnesota.

Bell feels the video board was the beginning of what will be a long series of positive developments for Simpson’s athletic department. He urges donors to invest in our programs.

“I think this is the first win in a long series of wins for our athletics. We appreciate the support of the ‘69 team to put forward funding. We’re going to need others to step up and help us in this process for other projects that need funding,” Bell said. “But, it’s a great start to a new day, so to speak. I’m excited about where we’re headed.”