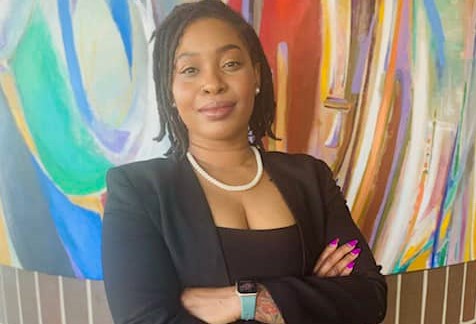 by Amelia Schafer and Paul Hyatt, Editor-in-chief and Feature Editor

After years of efforts, protests and lists of demands from student organizations, Simpson College will have a vice president of Diversity, Equity and Inclusion and will be adopting a Symbols of Hate Policy.

Levy previously served as the director of multicultural education and gender and sexuality services at the University of Northern Iowa.

Clayburn said she was relieved to hear that the college finally heard students’ voices; after years of students and staff asking for a position like this to happen, it finally happened.

“This was the first time that I had been on a search committee or that I had helped interview someone where I could see that they listened to the students,” Clayburn said. “I honestly cried when I first saw because I was so f***ing happy that finally after Maeve and students like Karrecia [Crawley] and Taylor [Williams] have been here forever, demanding certain things that get done, something happened. When we got a new president [Marsha Kelliher], she realized that Simpson has a lot going on, and she needed to have something to fix it. And I’m very happy that finally, someone made that connection.”

“When the President came to us and then told us that this position was going to happen, we were obviously thrilled about it, and it’s a cabinet member position, which is huge,” Love said. “That means we lack of better terms, have a seat at the table for discussions and a voice for us to have this campus become better overall.”

Love said he was confident that a position like this could happen in the foreseeable future at Simpson, as other colleges such as Iowa State University, Drake University, the University of Iowa and more have their own forms of a vice president of DEI.

“I always am in hope for pushing the needle forward,” Love said. “And I think this is a big giant step in moving that forward. I do think change is going to take time. I think this change is a necessary step in the right direction, so yeah, I was; I was confident that a position like this or something like this would happen. I just didn’t know the timing of it.”

As the vice president of DEI, Levy will be responsible for bringing new viewpoints to the president’s cabinet and acting as the Title IX coordinator, a role previously held by Area Coordinator Elyse Morris.

Rev. Mara Bailey led the search for the new vice president, helping to identify the best candidates from the pool of applicants, acting entirely online.

“This is an administrative role, serving as a vice president on the President’s Cabinet,”  Bailey said. “It is ‘the seat at the table’ for our college’s work in the areas of Diversity, Equity and Inclusion and thus will take on both a balcony-level view of this work, as well as coordinating many efforts across campus to help us grow in this work.”

As vice president of DEI, Levy will also be responsible for creating new practices or policies to help Simpson grow in its resources, such as new DEI training for students, faculty and staff.

“Her enthusiasm and ability to collaborate with multiple constituencies really made her mark with our campus community, and through their evaluations after the interviews, many people expressed their excitement for Keyah’s ability to come into this role and begin to effectively help lead our campus in this work,” Bailey said.

The second new initiative, the ban of hate symbols, calls for banning hate-related symbols when it impacts a student’s learning or participation in an educational activity or program.

“Severe, persistent, or pervasive discriminatory actions may include (but are not limited to) publicly displaying symbols of hate, racism, antisemitism, or terrorism,” the policy states. “Examples of hate symbols include neo-Nazi symbols and flags, racist hand signs, hate group logos, and Confederate flags. In defining symbols of hate, the College will consult expert resources like the Anti-Defamation League (ADL) Hate Symbols Database. Alleged violations will be addressed through the adjudication processes specified in the student, faculty, and employee handbooks.”

The policy states that classes may display or discuss these symbols when it is relevant to the subject matter of a course.

“Simpson College deeply values civil discourse, and all members of the college community share in the responsibility for maintaining a climate of mutual respect. In light of academic freedom, this policy does not restrict display or discussion of these symbols when their use is relevant to the subject matter of a course,” the policy states.

In an all-campus email, Simpson College President Marsha Kelliher reiterated that the ban is not meant to silence or limit students; rather, it is intended to enhance a safer learning environment.

“The policy puts into place language that will help each member of the Simpson College community understand our stance on hate speech and hate symbology that creates a climate in which learning is made more difficult by the behaviors of others,” Kelliher said in the email. “We will continue to promote civil discourse, but the policy serves as a reminder that each of us in the Simpson College community shares responsibility for maintaining a climate of mutual respect.”

Clayburn says she expects there to be some backlash about the policy, especially surrounding its implementation in a classroom setting.

“I expect that the policy is probably going to get criticized and questioned by a lot of faculty members, only because, like, how do we know if this is an appropriate time to talk about this… I’m expecting that there’s probably gonna be some pushback on that part of like, well, like really what were those restrictions, what is it necessary, what is it not necessary.”

Policies like this aren’t uncommon in education settings. When creating the policy, the ACDEI looked at similar policies implemented by other institutions. Indianola High school has a similar policy within its handbook relating to clothing. Clothing featuring the confederate flag may not be worn or used except in a learning situation.

“When we were drafting the policy as a subcommittee and talking about the different ways to kind of push the policy through and the wording of the document, we were looking at other institutions and how they kind of framed it, their language for the document, and so we use some examples of that kind of framing our policy,” Love said.

Levy will take office on June 1, and the Symbols of Hate Policy is effective immediately.