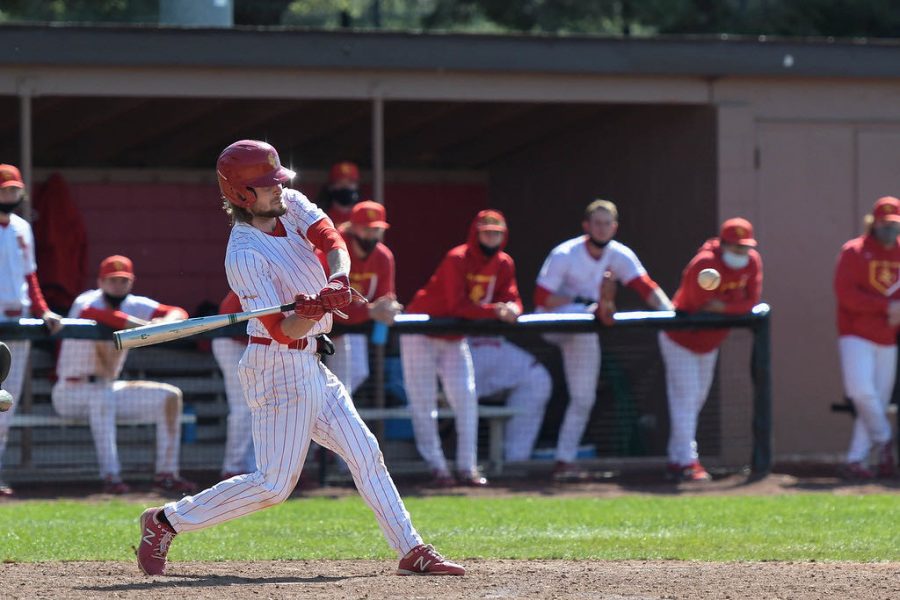 How did he get here?

“I tore my labrum in my shoulder, and overall, I just didn’t want to play football anymore and just moved off of that dream,” the junior shortstop from Saydel, Iowa, explained.

While recovering from the injury, Stephenson transferred to the University of Iowa, not intending to be an athlete; however, he saw an opportunity to play on the club baseball team.

After trying out and making the team, Stephenson rediscovered a love for baseball that he had in high school and received a call from Simpson baseball head coach Nathan Roling.

“Roling actually contacted me in the middle of the first semester of that fall when I was at Iowa and was wanting me to come to Simpson to play baseball,” Stephenson said.

Stephenson was originally recruited by Roling out of high school before he decided to play football for the Tritons. When Simpson dealt with the loss of several infielders, Roling circled back to Stephenson.

“I had no idea that he was even playing club baseball at [the University of] Iowa,” Roling said. “I had reached out, knowing that he was a very good high school baseball player just kind of on the whim of seeing if he was he would be at all interested.”

With a regained love of baseball and a best friend from his hometown attending Simpson, Stephenson decided to transfer again.

In Stephenson’s first season on the Storm, he saw limited action in a season that was cut short by the COVID-19 pandemic. As a sophomore, he appeared in five games and recorded eight at-bats.

This season, Stephenson didn’t begin the year as an everyday player. In fact, he didn’t start or have an at-bat, instead was mostly just used as a defensive sub.

“I never let it get me down; it actually made me more hungry to want to prove myself,” Stephenson said.

The lack of college experience is ultimately what led to a lack of playing time early on, but he caught on and adjusted to the game quickly by the will of his toughness and attitude.

“He just needed more time and more reps,” Roling said. “Baseball is a repetition sport. And having been out of it for really a year and a half, he needed more time. [He’s been able to] keep getting more and more comfortable, not only on a baseball field but, but at the speed of the college game.”

In a March 13 game against Monmouth College, Stephenson earned his first-ever collegiate start at shortstop. While hitting for an average of .255 with an on-base percentage of .340, he hasn’t been taken out of the lineup since.

On April 1, Simpson played its first home game since 2019. The 4-3 win was propelled by none other than a game-winning home run in the sixth inning by Stephenson. That home run was not only the first of his Simpson career but the first of his life.

“I always hear from people when they hit a home run, they don’t think about swinging for the fences,” he explained. “They just try to get a barrel on the ball there, and that’s what I did.”

In another clutch moment against Wartburg on April 11, Stephenson had a walk-off single with the bases loaded in extra innings to bring home a 5-4 victory for the Storm.

“Despite not playing the first few games, he kept working, kept making adjustments, and kept the positive attitude in terms of how he came to the field on a daily basis,” Roling said. “When he got the opportunity, he took advantage of it. As a coach, you’re always proud.”

Stephenson and the Storm continue their conference slate next with a four-game series against Nebraska Wesleyan starting on April 23 at McBride Field.