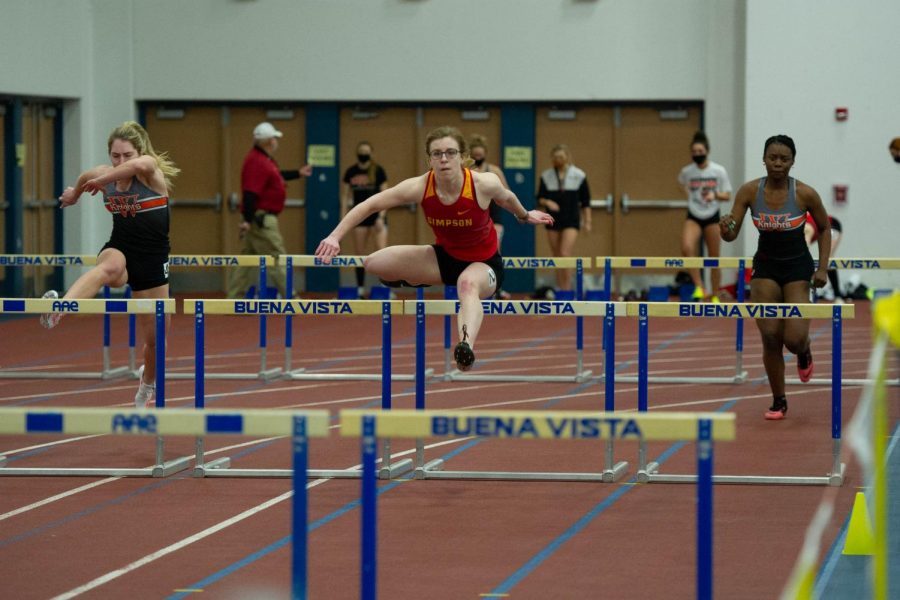 Audrey Arnold, a first-year runner for Simpson College, has had a thunderous start for the Storm.

With only an indoor season and part of the spring season under her belt, she has quickly paved her way as the top female runner for Simpson.

During her first season, she has achieved multiple first-place finishes during her indoor season and has placed in several events during the first two outdoor events.

Arnold is from Glenwood, Iowa, and currently participates in sprints and hurdles.

“I started to learn how to high jump, throw the shot put and run an 800. I already knew how to long jump and hurdle, so that’s what started me on that. Partway through the first season, and it did not go great,” Arnold said. “But that’s okay, my hurdle time went down, and my long jump was starting to go further, so I decided to not do the pentathlon. But I am still working on those events.”

All of the success that Arnold has met within her first couple of seasons has not come easily.

“I think one of the biggest obstacles would be my mentality about everything because I was trying to learn so many new events, and I am a perfectionist, and not being great at them at first was hard for me,” Arnold said. “Having my teammates there to talk to and keep motivated was really helpful… having them at meets when you are running your first 800, and you are struggling really helped me to get to where I am at.”

Looking ahead to her continued track career at Simpson, Arnold said she is just excited for the experience.

“I’m just really running for fun. I didn’t plan on running when I came here; it was kind of a last-minute thing. So, I am just excited to have fun, compete with people, see my times drop down, but I think it is more about the experience for me,” Arnold said.

Dave Cleveland, the head coach for track and field, said he was impressed with Arnold’s starting seasons.

“Audrey has been a great addition to our team. She is a fantastic student who has high expectations in the classroom as well as on track.  She brings a positive attitude and a tremendous work ethic every day to practice, which is key to success,” Cleveland said. “I think the sky’s the limit for Audrey.  She is just scratching the surface on what she is capable of.”