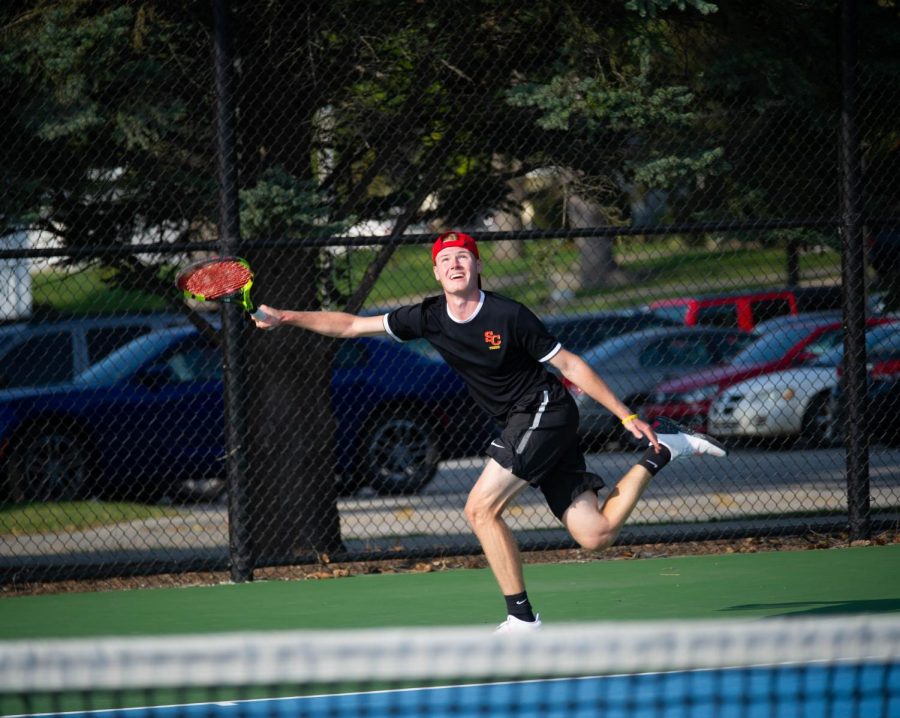 The last time Simpson played against BVU the Storm lost 6-3, this time the Storm walked away on top.

On Saturday, the men’s tennis team played against Buena Vista University. The Storm won the meet 7-2.

The day started off with doubles matches, the No. 2 and No. 3 duos won both of their sets 8-1 only losing the No.1 doubles match, putting Simpson ahead early with a 2-1 lead.

In singles, the bottom half of the roster, Peter Walkwitz, Ethan Humble and Brett Dewerff, all three won their matches 6-0, 6-0, not dropping a single game.

“It felt so good to win, and for us to not drop a single game is insane,” said Walkwitz.

The last time Simpson played against BVU the Storm lost 6-3.

With this victory, Simpson needs to win two out of the three upcoming meets to reach their season goal. They will play against Loras College on Friday, April 23, and the University of Dubuque on April 24.

If Simpson manages to win both matches they will automatically advance to the conference tournament, a first in the history of the school.

“One of our goals at the start of the season was to make the conference tournament, now that goal is becoming a reality…which is exciting,” said Vasconez.

If they win one match, then their match against Nebraska Wesleyan on May 1 will be to find out if they advance to the conference tournament.

The team has reflected on what went right and what went wrong and is making adjustments to be prepared for this weekend.

“This week to prepare for the two conference meets we have been working on doubles because it will really help the team if we can get three doubles wins,” said Vasconez.

If Simpson moves onto the tournament only the six varsity players will go on, if they are able to win all three doubles matches, they would then only need to win two out of the six singles matches to win the meet.

The team has worked hard up until this point and has made good progress over the course of this season alone.

“It shows that we definitely have a good shot at making the conference tournament this year,” said Walkwitz.

This was the first American Rivers Conference win for the spring slate.

“I feel like I played better as the weekend went on. I didn’t play my best against Morningside on Friday, but I changed it around and played better against BVU on Saturday,” said Vasconez.

The A-R-C conference tournament will begin Tuesday, May 4 and conclude on Saturday, May 8, the time has yet to be announced.