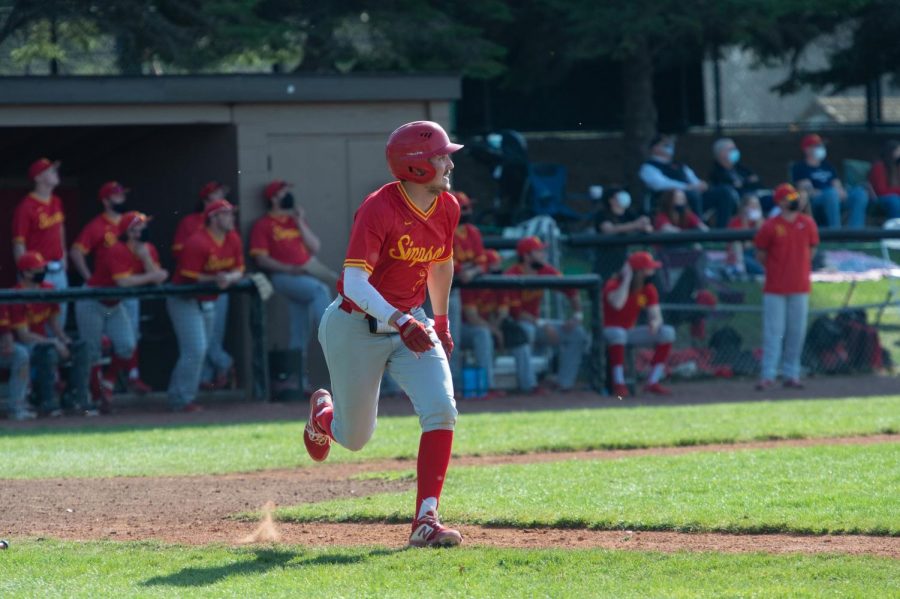 Despite a promising 4-3 victory in the opening game of the four-game series against Loras, Simpson lost the final three games of the series 15-11, 1-0 and 11-4 from April 1 to 3.

The stretch at home was the first time that the Storm have played at home since May of 2019. Win or lose, it was an exciting weekend at McBride Field.

“It was pretty special to be back out there,” said Simpson head coach Nathan Rolling. “I don’t know how many days it’s been, but it’s felt the full two years.”

In the first game, junior pitcher Colton Major led the charge with a six inning, one earned run performance on the mound. Major also recorded five strikeouts and surrendered just four hits in the start to move his record to 2-1.

At the plate, Simpson received contributions from senior infielder Quentin Sefrit and junior TJ Stephenson. In the third inning, Sefrit sent a two-run home run into left field and in the sixth inning, Stephenson hit his first homerun in a Simpson uniform.

“There really isn’t anything quite like it,” Sefrit said. “I saw the left fielder stop running and it was kind of a sense of relief. It’s a pretty cool feeling, especially in front of the fans.”

After Stephenson’s game-winning solo shut, junior Brady Held stepped on the mound to close the game. Joe Egan and Luke Fennelly both walked, then Max Cullen singled to load the bases with no outs. Held got Dylan Pardoe to ground into a double play before striking out Daniel Rogers to win the game in seven innings.

“[We] came up with two big performances from individuals that haven’t played the entire season and have come on here as of late,” Rolling said. “Guys fought really hard, and came up big in big situations.”

In the night cap, Loras jumped out to a 4-0 lead in the first inning just before Simpson responded with three runs of their own behind a two RBI single from Brennen Lemke.

The Duhawks and Storm went back and forth all night trading leads. In the sixth inning, Simpson earned an 8-6 lead after a Brennen Lemke double and a single from Sefrit. However, after taking the lead, Simpson surrendered it in the top of the seventh and never got it back. Losing 15-11 in a high-scoring affair.

On Saturday, Simpson lost a game in the opposite fashion. The Storm surrendered just one run on four hits behind an outstanding performance from Held, but Simpson’s bats were unable to capitalize on the performance on the bump, getting shut out with just three hits.

In the series finale, Simpson led going into the fourth inning, but after Loras scored on an error to tie the game at 2-2, they had a six-run fifth inning to take a commanding lead that Simpson was never able to overcome, losing 11-4.

The series had promising aspects, from dominant pitching performances to electric at bats for Simpson, but for the most part, neither aspect went well at the same time.

Simpson looks to rebound with another four-game series, this time at home against Wartburg with doubleheaders on April 10 and 11.