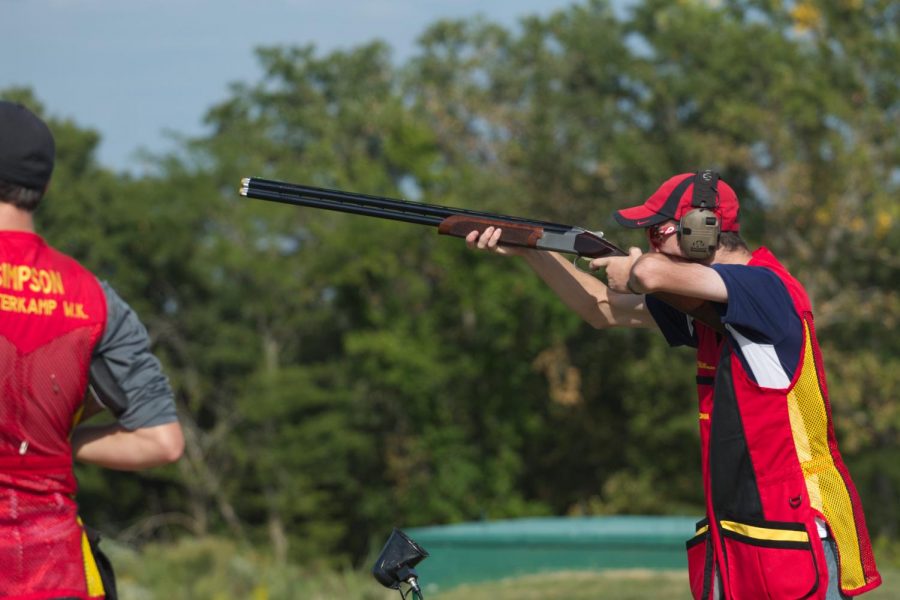 Matt Wilkinson shoots at practice for the Storm.

This was Sheehan’s last time going to Nationals before graduating later this May. “I knew going in I just had to do my job and do what I do,” said Sheehan.

One of the team’s greatest adversities at the competition was the weather. They suffered through three of their events outside in downpouring rain and winds upwards of 30 mph on Thursday. Although there was no rain Friday was not much better with the temperature feeling like it was below 15 degrees in the morning with a high of 30 degrees.

The students weren’t the only ones enduring the rain, Coach Dan Martin was there with them. “Probably the worst conditions we’ve ever shot in, but we had fun doing it,” said Martins.

The four athletes who competed on Saturday, Sheehan, Kyle Myers, Wyatt Heisterkamp and Matt (Chips) Wilkinson were rewarded with a comparatively warm and sunny 50 degree day with little wind.

Although shooting disciplines are scored individually for each competitor, the team’s points are totaled together for a composite team score. “We had quite a few young shooters that stepped up and did really well,” said Martin.

With the hardships, the team still left everything out of the range and performed the best they could. “With the weather that’s such a demoralizer when you’re cold and soaked through five layers of clothing and you’re getting blown on, to keep performing at any sort of level, keeping 90s on the board is really good,” said Chips.

Out of all the 14 teams Simpson placed 10th when all of the athlete’s points across Nationals were totaled for their respective schools. The divisional brackets are decided based on team size.

For women, Sheehan placed 21st out of the 49 athletes and Myers placed 65th overall out of the 138 men.

Due to communication issues on the Scholastic Clay Target Program part, the team is trying to get a team award for International Skeet.

Although the team did well there is still room for improvement. “We didn’t end up where we wanted to, but we ended very well. Everyone shot really well considering the conditions,” said Sheehan.

The Shooting Team has their next competition on April 10th in Oskaloosa. “It’s always about preparing for the next day, the next practice, the next competition… we’re gonna keep striving to be the best in the country,” said Martin.

The team faced many obstacles and challenges but still had a good time. “Easily my favorite part was getting to shoot the international discipline… it was just some fun at the end, this wasn’t a main focus but it was just a lot of fun getting to go out on the last day in some decent weather,” said Chips