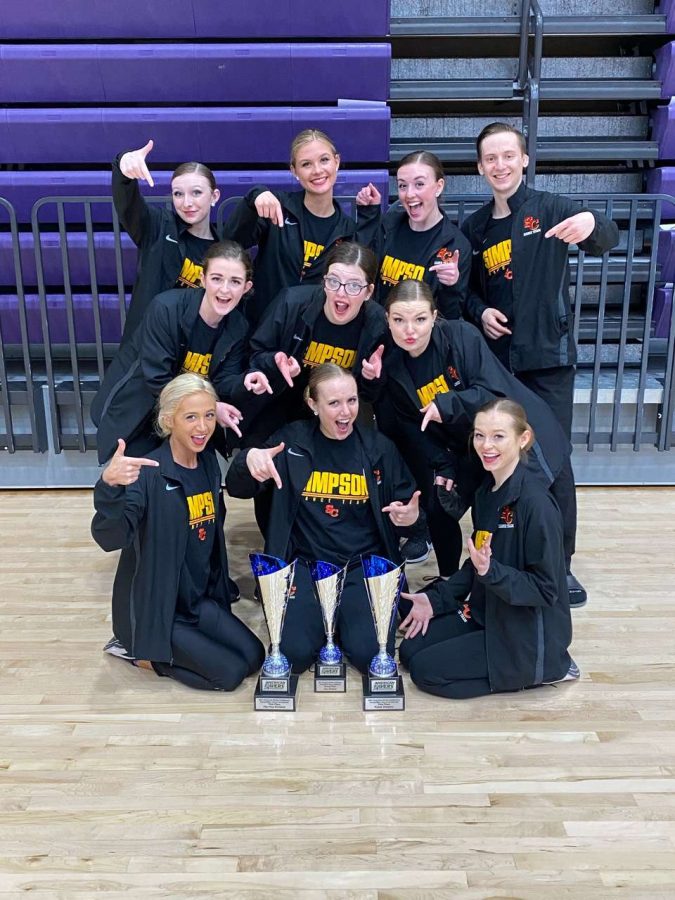 The Storm Dance Team shows off their two first-place trophies in Pom and Hip-Hop and their second-place trophy in Jazz from the ARC Cheer and Dance Championships.

After their dazzling performances at the American Rivers Conference Cheer and Dance Invitational on March 28, the Simpson Storm dance team looked back at how they navigated their pandemic-filled season.

Simpson brought home the most hardware in the ARC, earning two first-place trophies in the Pom and Hip-Hop divisions and a second-place finish in the Jazz division.

The triumph marked the second year in a row the dancers won the Pom division at the conference championships.

According to second-year Coach Lindsay Taylor, the path to glory was a long one; practices started on Zoom all the way back in mid-September.

“We were doing virtual practices, which as you can imagine are challenging,” she said. “We were finally able to practice in-person, so we have quickly learned all of the choreography via those Zoom practices.”

Once in-person dancing kicked off, there were various protocols the team had to follow to make sure the season could continue with minimal bumps in the road.

“We have to take temperature checks before every practice to make sure nobody is running a fever,” Taylor said. “We have to wear masks throughout practice which is challenging when you are breathing heavy.”

Taylor has structured the team’s responsibilities to be shared among its five specialized captains as a way of utilizing senior members’ skills.

“I don’t like to just do two captains. I like to give them specific roles that they could be interested in or could help them in their studies,” she said. “We have captains in choreography, media, strength and conditioning and academics as well as a student-athlete advisory committee representative.”

Junior dancer Sadie Green transferred in this fall and had rave reviews about the five-captain structure.

“It has been super helpful. Instead of having overall captains, it has been nice having captains dedicated to specific things,” Green said. “Especially since at the beginning of the year I did not know anybody, I knew who to reach out to for each particular thing.”

With Green being new to the team, she has been appreciative of her teammate’s supportive nature in welcoming her onto the team.

“It’s a different atmosphere than I’m used to,” she said. “It has been a lot more positive, and we’ve been doing very well this season attributed to that positive atmosphere that we have.”

Senior dancer and media captain Leah Edel said she was especially thankful for the opportunity to dance this year amid the pandemic.

“I have always danced, and it was finally my senior year so I was excited,” Edel said. “I was worried that it wasn’t going to happen, so I am really glad that it is.”

The senior said the thing she has missed most this year is the aura of being in a competitive environment.

“We are currently recording videos so it’s hard to get motivated because you are doing it in an empty gym with no one watching you,” she said. “I have also missed bonding with the team. My freshman year went to Daytona Beach for nationals and we would have gone there this year, but obviously, we are not able to go.”

The team is currently working towards submitting their final routine for the National Dance Team Association Competition virtually.

“It’s a little different because it is not a one-day competition where you are getting a bunch of different teams, but it is still an opportunity to compete, which we are really thankful for,” Coach Taylor said. “We are only competing against other teams who are virtual, so nobody has an advantage.”

As for their on-campus performances, the team will be dancing on the sidelines and at halftime at the one and only football game this Saturday, April 10.

“We did not get the football season back in the fall, so we are excited to have that little piece of football, even if it is just one game,” she said.