After a Dramatic 2020 Election, Benson Predicts What Lies Ahead For the Republican Party 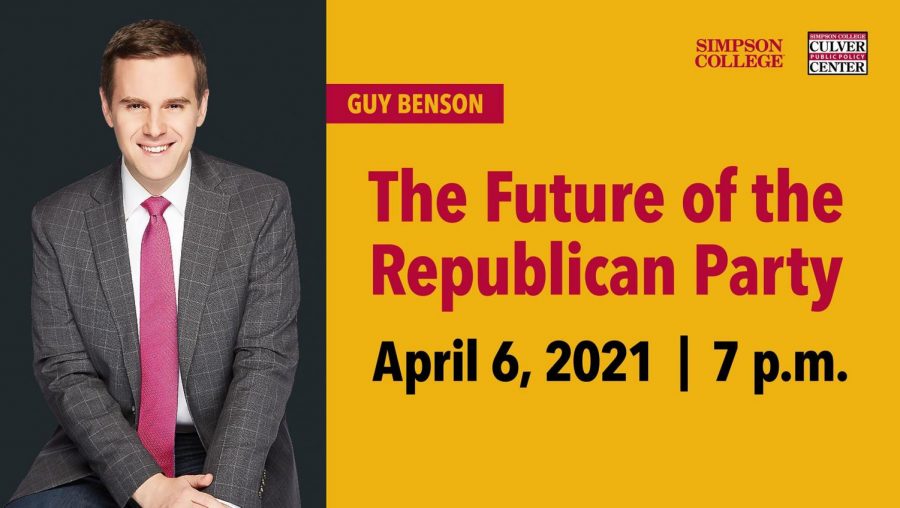 Guy Benson, a conservative political editor for Townhall.com, spoke to Simpson College students over Zoom about the future of the Republican Party, providing a unique conservative perspective.

“I wake up in the morning wondering who hates me today,” Benson said describing his relationship with people across the political spectrum.

Benson said that he always has been the same person, and has not given up his conservative values. However, he is also not a “cult member,” referring to those who blindly follow Donald Trump. Benson identifies as a center-right conservative and did not vote for either political party in the 2016 and 2020 elections.

Benson spent the first half of his lecture discussing both the short-term and the medium-term paths that the Republican party will likely take.

Looking at historical trends, Benson said he predicts that the house will be “very much in play for the Republicans.” Benson predicts the Republicans to be able to secure around two dozen seats in the House, which would give them the majority.

As for the Senate, Benson said it is once again a pure tossup. The Senate is currently split between parties, giving Vice President, Kamala Harris, the ability to break ties. Benson listed multiple states that could easily go to either party, making it very difficult to predict.

Despite this, Benson sees a real possibility for Republicans to completely take back congress in 2022. If the states that Benson predicts to go Republican do, both House and the Senate could easily be taken back over by the conservative party.

Alternatively, if conservatives do not capitalize on these states, Benson could see the opposite happening.

“I never put it past the Republican Party to blow it,” Benson said. “If they do, Democrats could take over congress.”

Moving to the medium-term path for the Republican Party, Benson discusses possibilities for the 2024 election.

“2024 will be very interesting. Trump hangs over everything, whether he will he run or not,” Benson said. “If I could predict what Donald Trump will say or do; I would be a much wealthier person. A lot of people who would run against him for the party won’t, they don’t want to piss him off. Likelier than not, Trump will clear the Republican party with a win.”

However, if Trump does not run, Benson said it will become interesting. This splits the remaining Republican party into a diverse group including those who are for Trump and will try and take his fanbase, those who hate Trump, those that will try to recruit, those who did not like him and those who fall in the middle.

Benson spent the last half of the event answering questions provided by those in the audience. These questions included asking about conservatives in college and more predictions for 2022 and 2024.

One, in particular, asked about the chances of a libertarian-leaning Republican winning the presidency in 2024. Benson answered this with a hard no. He said that the Republican party is seeing larger trends toward wanting to be more conservative with social issues, but more liberal with fiscal issues. This is essentially the opposite of a libertarian.