Jumping the hurdle between athlete and coach 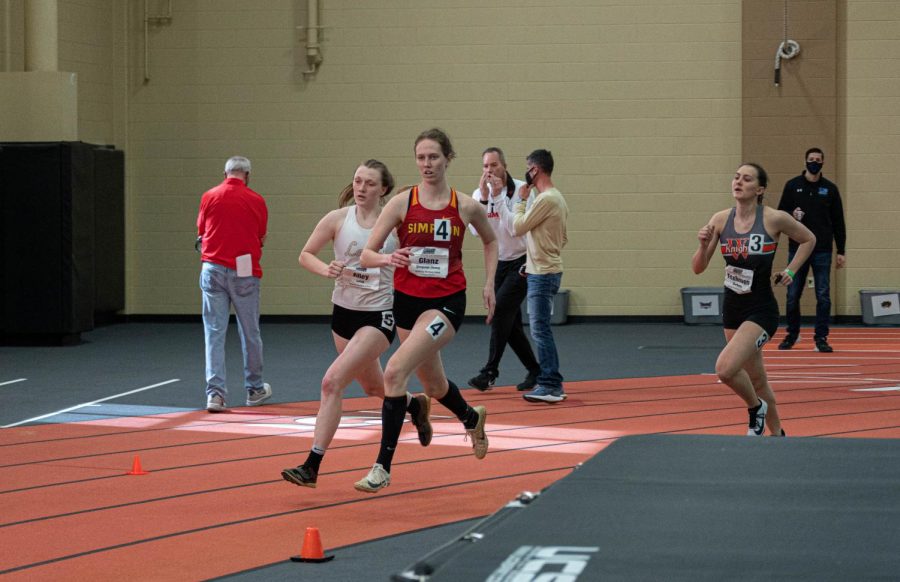 Glanz cruises around the corner during a sprint at Wartburg. The athlete and student coach was one of six Storm members in the indoor season to earn all-region honors.

On the weekends, senior Jamie Glanz is locking in before she competes in her final season of college track. But after she clears the high jump bar and crosses the finish line of a sprint, her role expands beyond that of an athlete.

Along with the coaching quartet of head coach Dave Cleveland, Heath Moenck, James Hoffman, and Jamie Busby, the Manchester, Iowa native joined the group for her capstone project when she had trouble finding an internship due to the pandemic and being out of the country last semester.

“I didn’t want to deal with all that extra stress, so I talked to Cleve [Dave Cleveland], and he told me to come work for him,” Glanz said. “I’ve always expressed interest in wanting to coach myself, and I’ve also always kind of been a team leader on the track and field team. It just kind of all fell together perfectly and seemed to fit pretty well.”

Three times a week, Glanz goes into Cleveland’s office to assist with any logistics that need to be handled away from the competition. Spreadsheets, recruiting, filming, sitting in on conference zoom meetings, and determining COVID protocols are some of her administrative duties.

Out on the track, she leads warmups for the team and discusses techniques with individuals during practices and meets. Her experience has benefited the team’s training, as well as her own. But Glanz says she wanted to define when to be seen as an athlete and the time to be seen as a coach.

“Defining those terms has allowed me to do a lot more with assistant coaching and what I want to do,” she said. “Cleve has done a much better job of working with me as my coach and not depending on me to do things myself when I need help. It was difficult at first…. but once we made that line a lot more definite, it’s been smooth sailing since.”

It’s no secret Glanz has a strong presence on the team. Her success on meet days speaks for itself and receiving instruction from one of the team’s top performers gives teammates a fresh change in leadership.

“It takes my voice out of it,” Cleveland said. “We’re a tight-knit group, and I think they enjoy that leadership from her. It’s giving her good experience and repetition, and she has even more standing with her peers.”

Aside from the respect, Glanz has gained, being a student-coach allows the team a voice to relay comments, concerns, and things they want to be implemented to the coaching staff. Freshman sprinter and hurdler Audrey Arnold agrees with the impact.

“She understands the struggle of trying to learn the new events, but also has been very helpful in finding drills that make it easier for me to learn what I am doing,” she said. “She is always willing to listen to your feedback and will take some of those things to our head coach so he can adjust what he is doing.”

Some athletes don’t respond well to authority when it comes from a player rather than a coach. But Arnold believes Glanz’s role has been well-received by everyone.

“As a female athlete on a team that does not have a female coach, it is really nice to have her help me through practices,” she said. “I compete in a lot of the same events as her, so she was a coach there to help me at meets when it came to warming up or giving me feedback as I competed.”

Looking ahead to her future after college, Glanz is soaking in all the advice given to her by the coaching staff. Mistakes to avoid, weaknesses to improve, and strengths to embrace.

Although her time as an athlete will end in May, she plans to extend her student-coaching into a career.

“I will still definitely be coaching, at least at the high school level,” she said. “But the ultimate goal is to end up at the collegiate level full-time. Whether assistant coach or head coach of a program, that’s the ultimate goal.”

An opportunity that almost didn’t happen turned into an experience that Glanz will take with her forever.