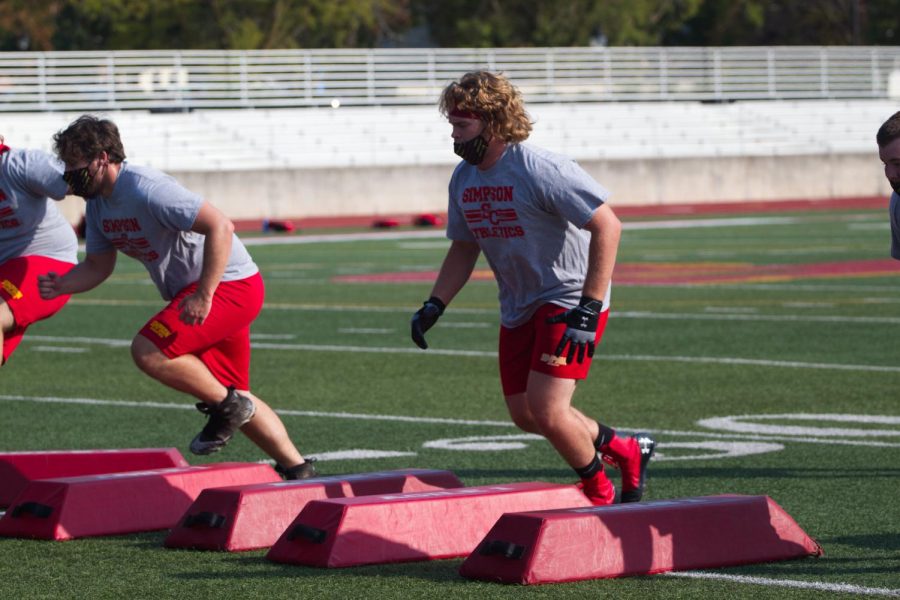 Players practice on the field, anticipating the new spring season.

For the first time in 496 days, the Simpson football team competed against another NCAA school in a scrimmage in preparation for a two-game spring season. Despite a shortened season, the Storm is thankful to be on the turf.

“I described it as a healing to the soul,” said head coach Matt Jeter when talking about how he felt after putting the headset on for the first time since 2019.

Simpson traveled to Storm Lake, Iowa, on March 26 to take on Buena Vista in a scrimmage. Initially, it was a scheduled game, but due to low participation numbers from the Beavers, it was settled as a scrimmage.

The teams didn’t keep score, but the Storm unofficially won the scrimmage. Despite the rust, Jeter liked what he saw from his team.

“There were times it looked like we hadn’t played in 496 days,” Jeter said. “And then there were times I saw a lot of positivity. The physicality, their toughness and grit were all really good.”

Due to COVID-19, the team wasn’t able to have a fall season or a traditional fall camp. Student-athletes, both returning and new, were thrown out of the rhythm of a normal season.

“I had some doubts coming into the season just because we didn’t really know what we were going to have,” said senior defensive lineman Jack Bootsmiller. “But from this scrimmage on Friday, I feel really good about where we’re at.”

Simpson, along with every team in the American Rivers Conference, hasn’t played a game since Nov. of 2019. With roster turnover and no non-conference games, teams will have practically no updated film of other teams.

“A lot of guys have left teams, new guys are stepping in, it’s more difficult just because you don’t know what you’re going against,” Bootsmiller said. “The film we are watching so far is really old. For Buena Vista, we watched [a] film from the last time we played them, which was a really long time ago.”

For Simpson, they had four first-team all-conference players from 2019 graduate. One loss is Sam Bartlett, a first-team wide receiver who had 1,301 yards and 16 touchdowns. Sophomore Reed Worth is a young player being asked to step into his void.

“We have a lot of guys that need to step up including myself,” Worth said. “We need to take it one day at a time and not look too far into the future because you never know when it could be your last play.”