Women’s soccer is ready to begin another fantastic season 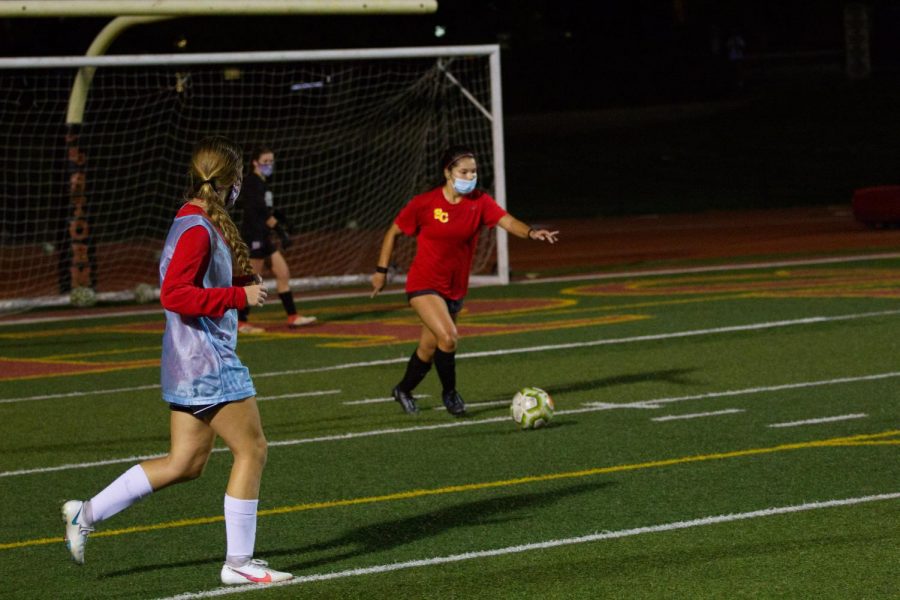 The Storm Women practice leading up to their home opener, Saturday.

The women’s soccer team had not played a game since Nov. 2, 2019, when their season got canceled due to COVID-19, but they are more than ready to begin the new season.

Simpson women’s soccer jumped from a seventh-place finish in 2018 to a third-place finish in 2019. Head coach Jeremy Reinert will be entering his third season after being named the American Rivers Conference Coach of the Year at the end of the 2019 season. Reinert believes that their big jump in ranking is the start to becoming conference champions.

“Moving from seventh to third started in the year we finished seventh. I truly believe that the seventh-place team was a much better team by the end of the year, and we were able to carry that momentum through the off-season,” Reinert said.

Reinert mentioned that COVID-19 has impacted their season and practices drastically.

“Last fall, it was much more noticeable, but now that we have secured regular testing protocols, we can train in ways that are very similar to what we have done in the past,” Reinert said.

The team has gained some essential newcomers that will be helpful for their success this season.

“Adding a few key incomers such as Abby Cozzoni, Brooklin Froehlich, Megan Roberts and Lizzie Arnburg to a talented group of returners that were grinding all off-season helped us be more competitive in the league,” Reinert said.

The women’s team lost a couple of players, including their Most Valuable Player, All-Conference Award winner and record-breaking goalkeeper Rachel Neumann, who freshman Brenny Frederick will replace.

“Brenny is a very technical goalkeeper and has played in big games. Winning a state championship at Ankeny High School gives her confidence that she can succeed here at Simpson,” Reinert said.

Women’s soccer played an exhibition game against Loras College on March 20 and lost 3-2. Senior Cassidy Price was impressed with the way the game went despite the loss.

“We learned a lot, and I think the team is coming together. Loras normally runs all over us, but Saturday was awesome because we got to play with them and forced them to play harder defense against us,” Price said.

The team is set to host the season opener on March 27 vs. Dubuque at 1 p.m. They will then prepare to host Buena Vista on March 30.

“Opening the season with Dubuque and Buena Vista will be interesting,” Reinhart said. “Dubuque is one of the two conference teams that beat us last year, so we are excited to get a chance to knock them off early. Buena Vista will be improved as their head coach enters his second season. We will need to be prepared and focused on securing three points in both of these early matches,”

Although the A-R-C is a tough conference to win, the team has confidence that they can battle with every team and come out on top.

“Our league is loaded with talent, and we aren’t waiting for other teams to get worse. We’ve gotten better and are looking to the every-game battle that is the [A-R-C],” Reinert said.

Senior Madi Strecker is excited to begin her final season here at Simpson, even though it may be challenging.

“Without the extra non-conference games, we have needed to speed up decision-making, but we feel ready and up to the challenge. Each team in the conference provides a different challenge. With that being said, we go into every game expecting a dog fight and ready to fight for 90 plus minutes,” Strecker said.

Strecker is thankful for this program and is proud of what it has turned into over her four years here at Simpson.

“This program has changed so much from my freshman year to where we are now. I am so proud of this team and everything we have overcome and am so thankful that I could play a role in the success we’ve had so far,” Strecker said.

Senior Kaitlyn Bravek also mentioned that not having non-conference games makes it harder to build team chemistry, but she is still confident in what the team has to show this year.

Simpson Women’s Soccer will kick off the season against Dubuque on March 27 at Bill Buxton Stadium.