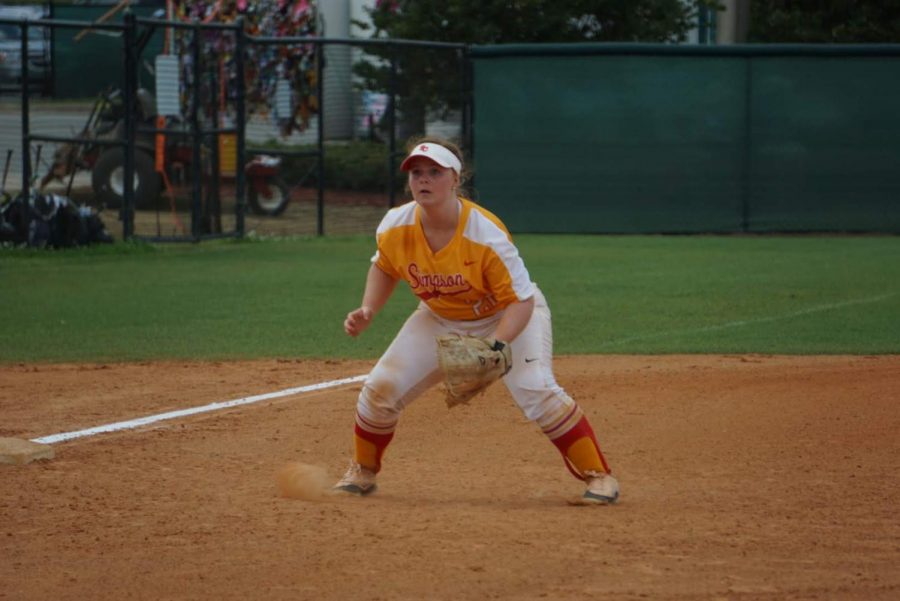 Sara Trent plays third base during the 2019 season in Flordia. Simpsonian archived photo.

Second-team all-conference in 2019 and a batting average of .516 through the first nine games, senior third basemen Sara Trent is on pace for another great season.

After her junior season’s cancellation last March, Trent hit the ground running toward staying consistent at the plate and on the field.

“A lot of working out and staying in shape. I would say, definitely working on form with defense and offense, for sure,” said Trent about her main focus this off-season.

“I just really want to make an impact on my last year here,” Trent said.

Trent leads the team in hits, batting average, and slugging through the first nine games and starting strong with a three-game sweep against Buena Vista to open conference play this past weekend.

“Being a successful batter is definitely a huge confidence boost. I’m extremely humble about it because I love the people whom I’m around. I really love the competition and the friendly competition that’s on the team pushing me always to be better,” Trent said.

Trent wasn’t always a successful hitter. She credits her recent performances to her hitting coach, which she has worked with for years now.

“Years ago, I used to hit really bad. So I went to a hitting coach in Ottumwa, his name is Cal Evans, and he completely changed my entire swing. And it’s been, I would say, improving ever since,” said Trent.

Unfortunately for Trent, she was not able to visit her long-time hitting coach due to COVID-19.

Now back on campus and in the company of her teammates Trent looks forward to stepping foot on the diamond every day for practice.

“I would say we do a lot of hitting at practice, which is really great. So that kind of keeps us in the groove, I would say of staying consistent and hitting and just trying to improve on everything too,” Trent said.

Never forgetting the basics, Trent like most softball and baseball players, has a golden rule when working to improve their swings, “Tee work makes the dream work.”

Practice is not the only time Trent spends on improving her skills. A companionship between herself and sophomore Katie Burns has also contributed to her success on the diamond.

“I would say one of the people that have actually pushed me is Katie Burns. She really inspires me as a person to just go out there and hit the ball. And I know that I have a great impact on her too. She asked me questions all the time. She’s just a really great person. And I really think she can do a lot of great things as a hitter and as a player too,” Trent said.

Burns, a first baseman, and Trent, a third baseman, both stay after practice for more reps working with each other on the field and in the cage.

“I get to stay after and take grounders and throw to her [Katie Burns]. She asks me a lot of questions about hitting, which makes me better as a hitter because I get to reiterate myself,” Trent said.

Behind every great athlete is a support system that wants nothing more than to watch them succeed.

“I just want to set an example for the younger girls that are on the team that may not get to play as much because I just want them to know that we were there at one point,” said Trent.