Men’s soccer prepares for first game of the season 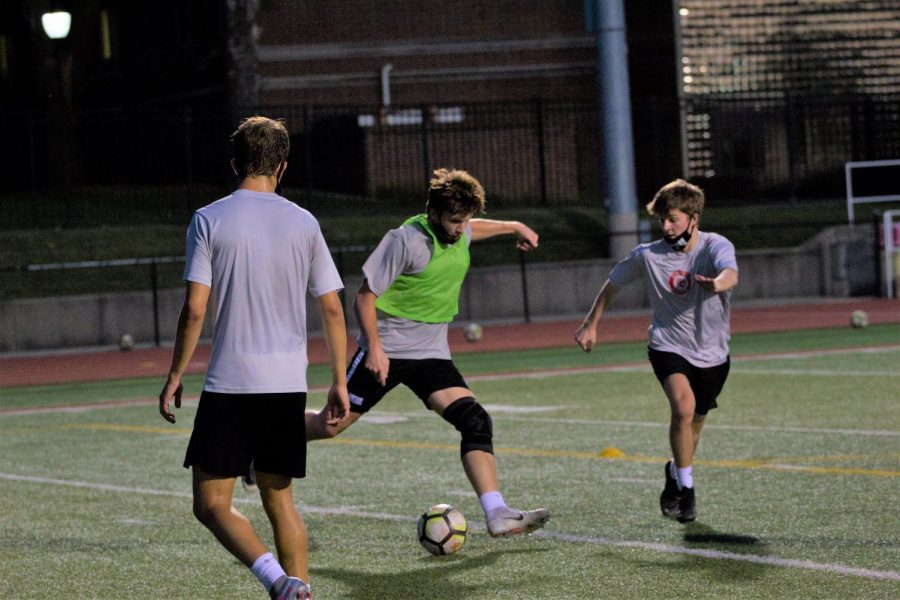 The men’s soccer team prepares for their season opener Saturday.

The Men’s soccer team opens up regular season play at home against Dubuque on March 27 after a long drought of inaction caused by the COVID-19 pandemic, but that hasn’t halted their hopes of winning a championship.

Despite time removed from competition, the team has been able to stay in preparation mode for the moment when the season finally rolls around.

“All the preparation we’ve done has nullified the rust. I’m a big proponent of if you fail to plan, you plan to fail. We really put a game plan into work hard, double down on our offseason, lifting sessions, and really just get after it in order to attack this spring effectively as possible,” Senior forward Enrique Idehen said.

One thing that has been an adjustment for the Men’s soccer team is the ability to adapt to having a spring season.

“I’ve been at Simpson since freshman year, and this is the first time we’ve had a soccer season in the spring instead of the fall,” said Idehen. “I’m used to having a big fall season and then being able to be a little lazier in the spring. It’s been interesting to flip the switch and have this season as a senior when this time of the year is filled with other commitments.”

Enrique Idehen is just one of the pieces that make this men’s team a serious contender to compete for an American Rivers Conference championship. The team itself has relied on senior leadership from Idehen, Mason Madren, Ian Dean and Justin Gilmour.

Alongside that core senior leadership,  younger players on the team add tremendous value to the team as well, as noted by head coach Rick Isaacson, who enters his 10th season under the storm.

“We also have a handful of underclassmen that have emerged as some of our hardest workers and best players.  Guys like Baraka Ellie, Jordy Triana-Vasquez, Ricky Ibarra and Alan Imamovic.  You can go from good to great when the work rate matches the talent level and that’s the challenge with this group,” Isaacson said.

With the talent, leadership, newcomers and experience in this group of guys, it can be hard to find room for everyone to fit on one team. Coach Isaacson mentioned how depth was going to be their biggest strength moving forward through the season.

“Our depth is arguably our greatest strength. We could realistically play anywhere from 18-24 guys per game.  We have players in support roles that would start for many of our competitors.  Guys like Jack Lammers, Spencer Young, and Peter Gaspari give us the type of bench that will allow us to wear opposing teams down,” Isaacson said.

Coach Isaacson has been preaching to his team about the opportunity they have in front of them to move up in the rankings and ultimately walk out of the 2021 season with a title.

“There’s an opportunity to adjust the hierarchy within our league.  We have finished third place in the league standings five years in a row.  While some of our competitors would sign-up for third-place in a heartbeat, that falls short of our own standards/expectations.  We want more.  Our players are hungry for more.  That’s what they’ve been working towards. The ceiling is 8-0.  But you can’t go 8-0 without first going 1-0.  That starts on Saturday [against] the University of Dubuque.  We will set the bar high this spring,” Isaacson concluded.

The Storm gets their first crack at hierarchy hacking on March 27, when they host Dubuque at Bill Buxton Stadium.