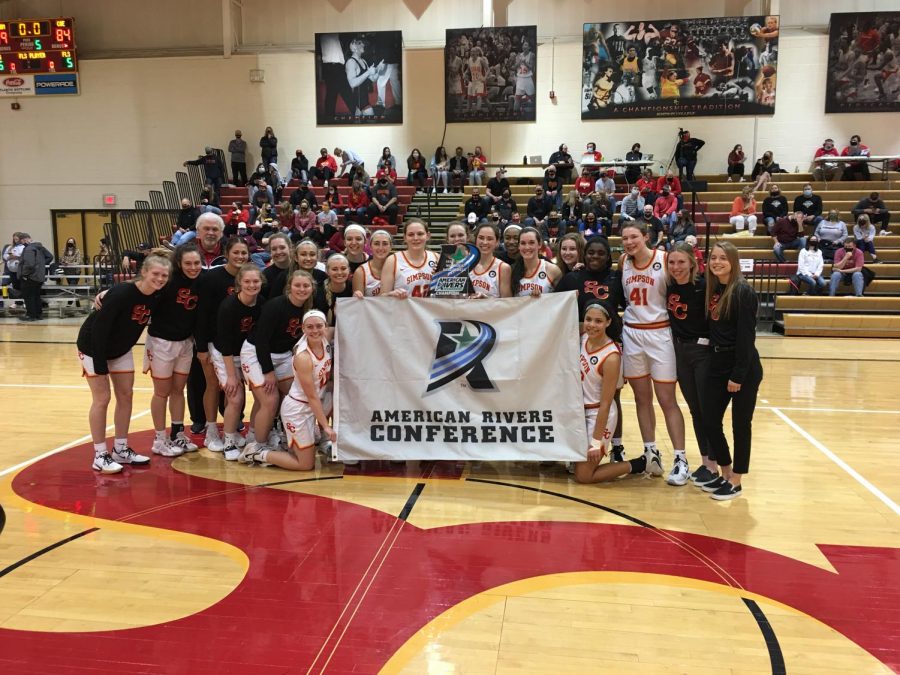 For the first time since 2013, No. 7 Simpson College (12-0) is conference champions. With an 89-84 overtime win over Coe College (9-4,) Simpson captures the first American Rivers Conference Championship trophy in school history.

The win capped an end to the first undefeated conference season since 1998 and the first overall undefeated season in Simpson Women’s Basketball history.

Led behind a career-high 31-point output from sophomore Cassie Nash, Simpson captured 13th conference championship in school history. Head coach Brian Niemuth has been at the helm for 12 of the wins.

The Storm led by as many as 14 late in the fourth quarter, but Coe rallied to send the game to overtime, primarily behind Molly Buck and two late-game threes.

After a Buck three gave Coe a 79-77 lead with four seconds remaining, senior forward Cameron Kincaid was fouled with less than a second left and made two free throws to extend the game.

In overtime, senior forward Jenna Taylor nailed a three-pointer to give the Storm a cushion, but the Kohawks hung around, having an opportunity to tie the game with under one minute left.

Nonetheless, two late free throws by Nash gave the Storm an 88-84 lead that was ultimately the dagger.

Not far behind Nash, Taylor scored 23 points on 9-12 shooting from the field. Anna Wanek and Kincaid also tallied double-figures with 10 points a piece.

Simpson defeated Luther 94-58 in the first round of the A-R-C Tournament before bouncing Central in the semifinals by a score of 75-61.

The win over Coe caps an end to a historic season for Simpson.