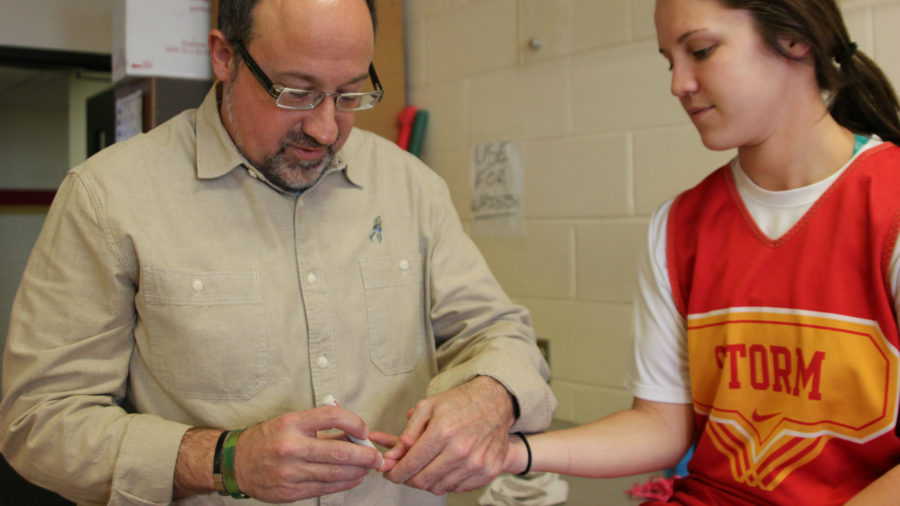 The urge to compete often gets in the way of an athlete’s health – so much so that an athlete will lie or fake their way through a concussion test just to stay on the field.

Mike Hadden, professor of physical education and program director of athletic training, hopes to put an end to that by joining in a research effort aimed at developing an on-site concussion blood test that gives immediate results, like a glucose or pregnancy test would.

“This point of care test will test up to six different proteins in our blood and they’ll tell us if a concussion is present in the blood, and it only comes from the brain, so it’s clearly related to a concussion,” Hadden said. “That will make it unique, is that we are not just testing through one (biomarker) but multiple ones.”

An athlete will have a drop of their blood sampled and immediately tested for proteins that would indicate whether or not a concussion has occurred, instead of relying on more subjective measurements.

The new research initiative was started by Dr. Kevin Wang, director of the Center for Neuroproteomics and Biomarkers Research at the University of Florida.

Hadden, who was on sabbatical during the spring semester of 2015, came across one of Wang’s articles, inquired about the testing and, shortly thereafter, Simpson became a part of the initiative.

“He got back to me very quickly, and I told him I am at a small D3 institution, so he asked me how many concussions do we see a year. And he told me that we would love to have Simpson as an affiliated site to work with,” Hadden said. “Because obviously when you work with Division I guys, those guys aren’t too forthright with letting us know what’s going on, whereas in Division III it’s a little bit different.”

Hadden and Simpson have requested a grant through the National Institute of Health to help fuel the research. Many other schools similar to Simpson will engage in the research process.

The study will be conducted by taking 100 milliliter samples of blood from student-athletes before freezing them and sending them to the University of Florida for testing.

“Then, eventually, hopefully in two to three years depending on FDA approval, we will then have the test where we can test to up to six proteins at a time and use it on the sidelines and in emergency rooms,” Hadden said.

Other media reports coined the research as a potential breakthrough, although Hadden wanted to caution people against that belief unless a new protein “that hasn’t been used before” or if effective, periodical tests following the initial examination can be utilized.

“What I want to do, but you really can’t get to this point without the first point, but we need to have a protein biomarker test that tests where they’re at one day, one week, 10 days, two weeks, etc.” Hadden said. “We want that initial test to see if they have a concussion, but monitoring is really where the breakthrough is going to come.”

With roughly 40 concussions being suffered by Simpson student athletes last year, the testing will have a big impact for Storm athletes and those around the country.

Hadden has a positive outlook on the progress of the research and hopes to extend his concussion work into areas involving concussions and CTE as well as differentiating between the signs of effects from toxins or trauma from concussions in the brain as they both trigger similar reactions in the brain.

“I think it’s very good that we have success,” Hadden said. “I think the chances are very good that this will go through in development and get passed by the FDA. There are a bunch of us testing for the same proteins so it’s a matter of getting enough studied to see if it’s reliable.”

● Hadden partnered with Dr. Kevin Wang, the director of the Center for Neuroproteomics and Biomarkers Research at the University of Florida.