Regan Freland: The shot of a lifetime 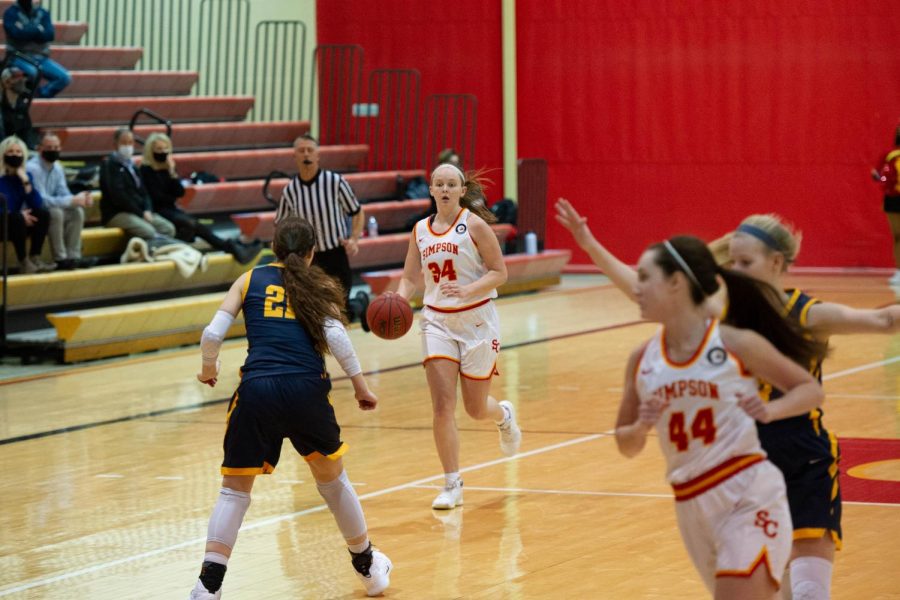 Freland dribbles across the court.

7.2 seconds on the clock, freshman Regan Freland, who wasn’t even sure if she would continue her basketball career months ago, was inbounding the ball, down two points to the No. 4 team in the country.

Little did she know, as she was inbounding the ball, that a chance to hit the biggest shot of the season would be coming up. If it weren’t for a conversation with head coach Brian Niemuth, that opportunity never would’ve come up.

Freland played at Kirkwood Community College before transferring to Simpson at semester. Freland planned on not playing basketball for the Storm.

“I wasn’t even sure I was gonna play basketball because I kind of decided at Kirkwood it wasn’t my thing anymore,” Freland said. “(Niemuth) talked to me and said ‘whenever you feel comfortable, come to practice to see if you want to join in.’ I loved the atmosphere.”

In the first three games of the season, Freland played just three minutes, not recording any points. Since the game against Central on Feb. 3, where she scored the first points of her Storm career, Freland has played 18.6 minutes per game and has averaged 8 points per contest off of the bench.

“She’s got a very high basketball IQ and learned quickly,” Niemuth said. “She knows enough that I can play her, and her skill set fits our style really well, so it’s gone a little faster than what I expected or what I’m sure she expected too.”

Despite coming off of the bench, Freland has played a major role in the success that resulted in an undefeated regular season.

Freland played no bigger role this season than the regular-season finale against Wartburg. With 2.2 seconds left in the first overtime, sophomore Cassie Nash fouled Wartburg’s Payton Draper to prevent a layup that would’ve given the Knights a one-point lead. Instead, Draper missed one free throw which sent the game to double overtime.

However, that foul was Nash’s fifth which disqualified her from the game, leading Niemuth to give the nod to Freland. Nash had no doubt that Freland was fit for the situation.

“It sucked actually having five fouls, but having a good team to back me up was nice,” Nash said. “[Freland] has really proven herself, especially in the last couple of games that she is a shooter.”

With seven seconds left in the double overtime, Simpson hadn’t made a field goal but found themselves trailing by just two points with the ball.

Niemuth drew up a play that included Freland inbounding to the game’s leading scorer, Cameron Kincaid, but the senior was double-teamed, leaving Freland unguarded, but she still had to successfully pass the ball to a teammate.

“I was almost reaching the five-second mark, kind of freaking out,” Freland said. “ I passed it to Jenna and she realized my girl wasn’t on me and passed to me. I didn’t even really think about it and I just shot it.”

Freland stepped into the shot, drilled the three-pointer, and gave the Storm an 81-80 lead with five seconds left.

“I was kind of in shock,” Freland said. “I didn’t even think about it. Then I was thinking, what do I do now?”

In a frenzy, the Storm still needed a stop. As time expired, Draper missed a three-pointer that would’ve won the game. Simpson won 81-80 and finished their first undefeated regular season in conference play since the 1998-99 season.

“It’s a big shot, and now she knows that she can step up in the critical part of the game and make a difference,” Niemuth said.

The freshman from Prarie City, Iowa earned recognition for the shot from the conference, as she was named the A-R-C Player of the Week on March 8.

Freland has a long career ahead of her at Simpson, and it all starts with her first conference tournament on Tuesday, March 9, against Luther at Cowles Fieldhouse.