Man On the Moon: III: The album review 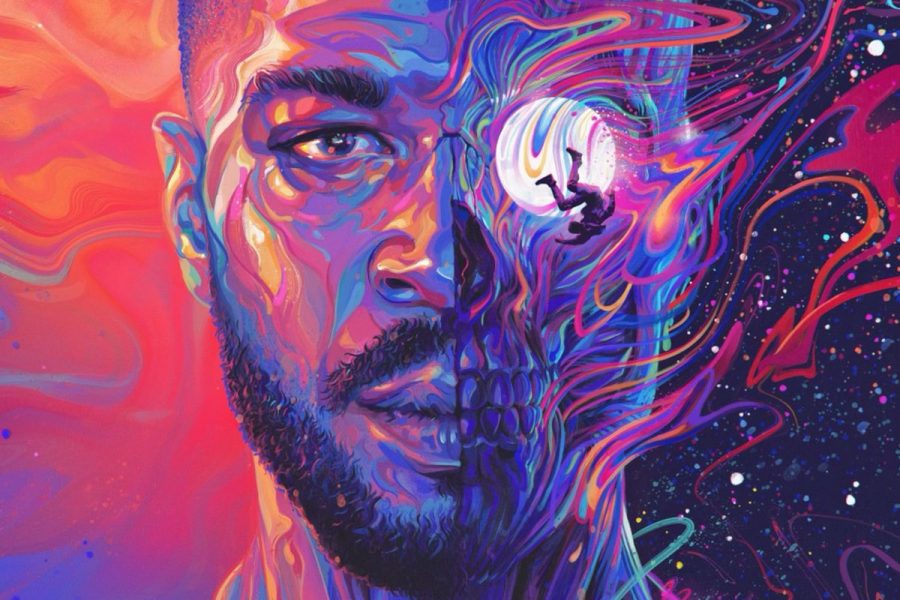 Photo courtesy of Man On the Moon III: Album Cover

Cudi, hailing from Cleveland, Ohio dropped his 8th studio album on Dec. 11, 2020. The announcement of this record was revealed on Cudi’s Instagram page on Dec. 7, 2020, sending shockwaves of excitement around the rap and hip-hop community.

In a year tortured by uncertainty, struggle, and loss caused by the pandemic, it felt like fans across the globe were all tuning in together to see what the third piece of the Man On the Moon trilogy had to offer.

Known for his melodic hums that touch the soul when listening to, some might be surprised to see Cudi rapping so heavily on this project with subsequent bars.

Cudi reopened the trilogy on track two titled, “Tequila Shots” by once again exploring themes of depression and anxiety that have plagued his entire life.

A line from the lyrics of that song read, “Nights my mind is speedin’ by, I’m holdin’ on. Askin’ God to help ‘em, are you hearin’ me? Girl is tellin’ me she don’t know what she want. Lotta demons creepin’ up, they’re livin’ underneath. Gotta take a minute, y’all, traveled far. Feelin’ somethin’, no, I can’t ignore my instincts. Back just where I started, it’s the same old damaged song.”

It’s been well evident throughout the course of his music that he’s had a tough go around with mental health. Fighting through the pain to find happiness to only discover that pain is potent and can strike back at the most unlikely moments in our lives.

As we reach the halfway point of the album on track nine, “Mr. Solo Dolo III” is a sobering rendition of what isolation has done to Cudi throughout his journey in life.

The lyrics read, “Had me goin’ crazed through the city while I burn it down. This is just my way, keep on prayin’ for me. Lonely on my ride as I fly, arms is open wide. Don’t wanna leave without sayin’ bye.”

You get this sense from the instrumental in the background that Cudi is in an eerie void of the exploration of self, facing an ego-death on a rollercoaster as children scream in the background.

You have to admire at this point in the story Cudi isn’t holding back from how he’s feeling, letting the listener embrace the pain as if it is their own.

Now, on the back half of the album, we see the tone start to slow down as Cudi gives us a moment to collect our breaths. The outro of the instrumental to track 11, “Elsie’s Baby Boy [flashback]” sounds like what can only be described as a serene, divine, tranquil, and nostalgic nod to his childhood.

The flashback echoes solace in the discomfort of a complicated past. Cudi acknowledges the sadness has followed him almost everywhere he goes, and you can’t help but shed a tear at this point, because the raw emotion is bleeding through his music.

The saga finally reaches its conclusion on the second to the last track on the album, “4 da Kidz,” Cudi offers hope to his fans and a word of advice to ones who struggle like himself. “Never lose hope, if you don’t, you’ll be golden. Always keep your family close, keep your heart open. Here’s to the chosen, solo dolo rollin’, hm.”

With the Man On the Moon trilogy now closed, Cudi sticks true to his mission statement in 2009 from on “Soundtrack 2 My Life”: “I try and think about myself as a sacrifice just to show the kids they ain’t the only ones who up at night.”