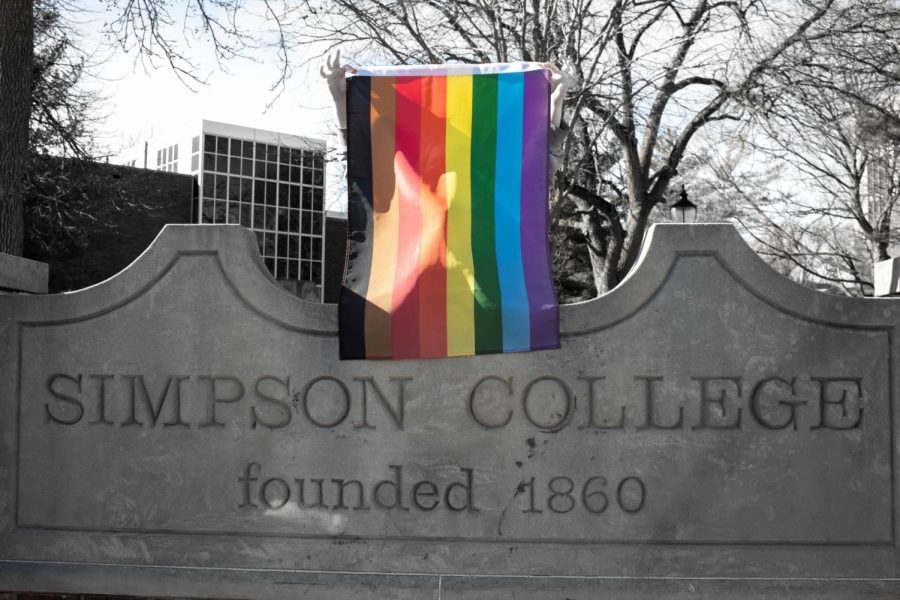 RMN gives Simpson the chance to be both Methodist-affiliated and be supportive of its members in the LGBTQ+ community.

In reaction to the passing of the traditional plan at the United Methodist General Conference in 2019, which prohibits same-sex marriages, Simpson College released an inclusivity statement.

“We, the members of the Simpson College community, recognize as an essential component of its mission and history that Simpson College is committed to creating and maintaining a creative, diverse, just and inclusive community in which all develop their abilities to live and thrive in a complex and interconnected world,” The statement said. “Consistent with our educational mission, we recognize ourselves as a community that respects individual identities linked to varying socio-cultural characteristics including, but not limited to: race, ethnicity, gender identity and expression, sexual orientation, national origin, citizenship, first language, religious or spiritual tradition, age, functional ability, socioeconomic status, physical attributes or familial status.”

The Traditional Plan stands to hold each church accountable for following rules and standards set in the Book of Discipline of The United Methodist Church.

The Traditional Plan was founded on one of the beliefs of traditionalists and evangelicals of Scriptural teaching that sexual relationships are only between one man and one woman. One of the standards of the plan also encourages annual conferences, bishops, clergy, and congregation unwilling to live within the requirements of the Discipline to withdraw from The United Methodist Church and form their own self-governing Methodist church.

The Reconciling Ministries Network has been developing to create a safe system for all United Methodists since 1984 to support everyone regardless of their sexual orientation or gender identity. The First United Methodist Church in Indianola became a Reconciling Congregation in June 2019. Rev. Mara Bailey is gathering support to guide Simpson forward in aligning with RMN values.

“We have a campus welcome inclusion statement that had been passed previously. As a college, we are affiliated with the denominations but we aren’t going to change our stance,” Bailey said. “[RMN] allows us to remain affiliated but allows us to really be clear what we believe through that affiliation and that this one issue doesn’t define the church. Our church is about so much more and we bring a lot of value out of other parts of that connection as a college. This is a chance where we are both United Methodist and inclusive.”

Bailey has presented to groups on campus including chapel interns, members of SGA, ACDEI, PRIDE, and will soon reach faculty and higher councils. Each organization so far has unanimously voted to support the initiative.

“Two other colleges have gone through this before,” Bailey stated. “If we pass this then we will be the third college to become a Reconciling community. It is a process but a well-received one.”

“Because of the 2019 decision from the general conference I was here for that aftermath and I knew so many devout Methodist practitioners who were not only saddened by the fact that their church had made that decision but were worried for their friends who they knew were part of the queer community,” Moad said.

LGBTQ+ students across campus know this is a big step in the right direction for Simpson. One fourth-year student is disappointed they didn’t have this opportunity their first year but are happy for the change across campus.

“Being a part of the UMC I understand and realize the discriminatory language that the church has used against LGBTQ congregants and pastors throughout many decades. The Reconciling Ministries would give a voice to many LGBTQ students who need help with spiritual or faith questions without the fear of being discriminated or marginalized against.”

Moad emphasized the need to reduce harm amongst LGBTQ students as a Methodist-aligned institution.

“I don’t want us to be a Methodist practicing college that doesn’t recognize the harm that the national conference did in 2019,” Moad said.

More opportunities will be available for students to feel included on campus if the vote passes to align with non-traditional values. RMN gives Simpson the chance to be both Methodist-affiliated and be supportive of its members in the LGBTQ+ community.

“There is a statement that RMN requires us to pass and we’ve added to it because we aren’t all United Methodist and we aren’t all Christians on campus. We want people to feel good about it even though they themselves may not be United Methodist,” Bailey expressed. “We want to help people understand why it matters and what we have to offer to the denomination in terms of an inclusion witness. As a United Methodist-affiliated college, we welcome persons of any- or no- faith identity.”

Reconciling Ministries Network Inclusion Statement can be found at https://rmnetwork.org/get-involved/reconciling-ministry/