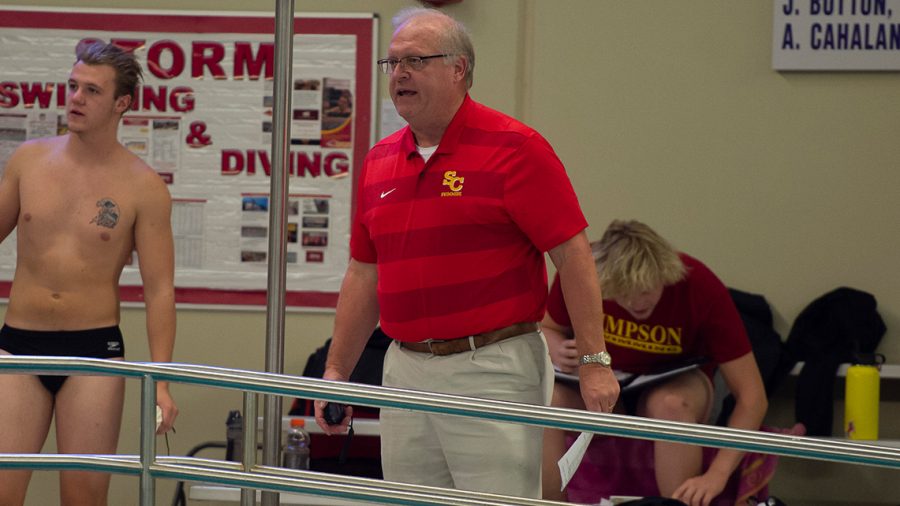 Long-time Simpson swimming and diving head coach Tom Caccia called it a career with the announcement of his retirement on Feb. 23.

Caccia finished his eighth season at the helm for the Storm on Feb. 20 in the Liberal Arts Championships. Prior to taking over Simpson’s program in 2013, Caccia spent 30 seasons as one of the best Wisconsin high school swimming coaches at Platteville High School.

Over the span of his 41-year coaching career, Caccia received the following honors: four-time Wisconsin High School State Swimming Coach of the Year, Midwest Region Coach of the Year, top 100 Most Influential People in Aquatics in the United States by Aquatic International Magazine and was named to a member of the Platteville High School’s Hall of Fame.

Despite the recognition, Caccia said he will miss the relationships he’s formed along the way.

“I’m going to miss the team [and] the kids,” Caccia said. “It’s been part of my life for practically all my life.”

One of many athletes that Caccia left an impact on was Alyssa Harris, the latest winner of Simpson’s Student-Athlete of the Week.

“He helped me through a lot more than just swimming, he cared about his swimmers in and out of the pool,” Harris said. “As a freshman, you deal with some stuff and he’s just always there for me. I never asked him to be, but he was.”

During his eight-year tenure at Simpson, Storm swimmers over 130 school records in over 35 races, a mark that will surely stand for a long time.

“I would hope that if anything my legacy would be that we’ve had some stability to the program,” Caccia said.

The success as a coach started when he was in the pool. Caccia swam for one season at Northern Illinois before transferring to the University of Wisconsin-Platteville. In his career as a Pioneer, Caccia set 25 school records and was named the most valuable swimmer on the team twice while also qualifying for nationals on two separate occasions.

Throughout his 45-year career, as a competitor and a coach, Caccia never stopped growing his knowledge of the sport.

“You can always learn stuff and even this year I was learning new things,” Caccia said. If you stop learning, then it’s time to go home.”

Along with the constant learning, Caccia appreciated every moment he had with his swimmers.

What’s next for coach Caccia after a storied career?

He will be moving back to Wisconsin to be more involved with his family.

“My daughter teaches at Clark University and our son-in-law is a wrestling coach at Western Dubuque,” Caccia said. “We plan to get up there, see the grandkids more. I plan to live in my house. I think we’re just going to take it easy and see what the summer brings.”