Student-athlete Chris Honz talks strategy and what keeps him motivated 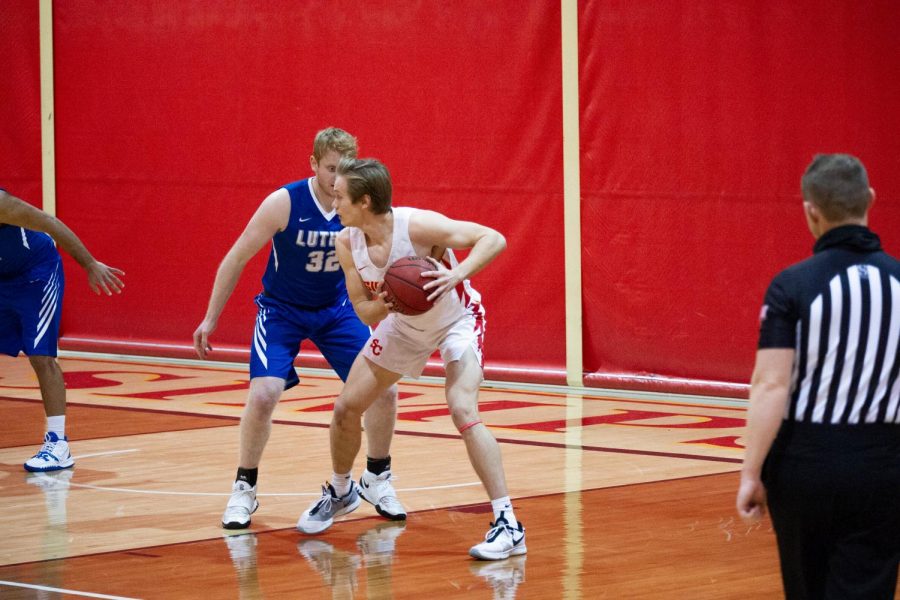 Chris Honz posts up to add more points to the board for the Storm. Photo by Corinne Thomas

Chris Honz, a junior and student-athlete for Simpson’s basketball team, has gone from a bench role to the second-leading scorer and leading rebounder.

“The season is only going up from here. We had a rough start getting team leadership going,” Honz said. “With the loss of four or five seniors last year, we needed to find some guys that could step up this year and make an impact.”

Honz thinks the team has been playing really well together and has been establishing more team chemistry.

“I think we’re gonna be ready for our conference tournament soon,” Honz said.

Honz says he learned a lot from being back up for Simpson graduate Adam Reiter last year.

“I was back up last year for Adam Reiter, who was a guy I respected very much. He was a great player and great person to learn from as far as how to play in this conference and how to get more comfortable with playing.”

Honz also says he fought his way for the playing spot he’s in now.

“I worked really hard this summer, I’d say, harder than most people this summer,” Honz said. “I think I earned the role this year and earned that playing time. I think it’s just been a really fun journey for me to get more time on the court.”

Honz’s motivation comes from not getting the athletic respect he deserved in high school.

What Honz loves about the game is all the friendships he can get throughout the process of basketball itself.

“I’ve been on many teams, and I’ve earned many best friends out of the deal. It just makes the game more fun. It makes practices more fun, it’s just what I love most about it.”

Honz explained his stats and how he’s been keeping them up.

“I’ve been scoring and rebounding more. And a lot of that I think just comes from effort.”

Honz went on to comment on the team’s offensive playstyle.

“We have a really good offensive play style to get everyone involved, and if I put in the effort, I’ll be able to keep up my stats,” Honz said. “As long as everyone’s doing the right thing in offense, everyone’s going to succeed.”

Success can be measured in different ways.

“It’s not necessarily about making sure my stats are up, but just making sure that we’re doing the right things at all times,” Honz said.

Honz explained his strengths and what he brings to the team.

“I think I make everyone a little bit more easy-going on the court. I hope I make it more fun for everyone because that is the point of this game. Everyone wants to have fun with it along with winning.”

“I think I can also bring more leadership to the team because I feel like I have a voice everyone will listen to,” Honz said.

and their coaching style for basketball.

“They critique a lot of things. They want things to be perfect because they think if we can perfect it during practice, there will be a lot fewer mistakes during the games,” Honz said.

He says they are strict at times but that when it comes to game time, the strictness goes away, and they let the team play the game without any concern at all.