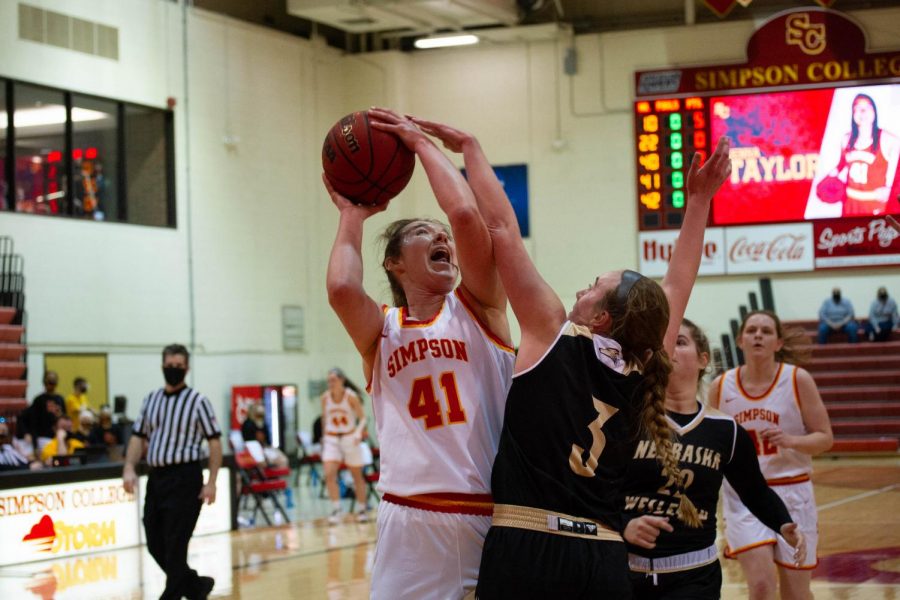 Jenna Taylor puts up a rebound for 2 points against Nebraska Wesleyan.

She reached the landmark on a three-point basket in a 78-68 win over Coe College on Jan. 30. Taylor recorded 16 points on this historic day.

“I think it’s a testament to just how hard, not only I’ve worked but also my teammates and how many hours I’ve spent in the gym with them and (my) coaches,” Taylor said.

The forward from Creston, Iowa, has recorded 1,027 points in her career while shooting 52.7% from the floor. Along with that, Taylor has tallied 148 rebounds in 75 career appearances.

It hasn’t been an easy path to such a storied career.

“It’s definitely come with some adversity, I was injured my freshman year and didn’t play at all. And then I was injured half of last year,” Taylor said.

Despite the shortcomings of injuries, Taylor made up for it with improvement in the offseason.

“During the summer, you walk through the main hall of the athletic department and down in Cowles is Jenna shooting, getting a workout in,” said Simpson women’s basketball head coach Brian Niemuth. “She has probably one of the best work ethics of any player I’ve ever had.”

Taylor, who was also named American Rivers Conference Female Athlete of the Week on Feb. 1, also overcame the adversity of a COVID-19 filled offseason by working out in unconventional ways.

“[We] did a lot of shooting outside. Obviously, a lot of gyms in the facilities were closed for a good portion of the offseason,” Taylor said. “It’s definitely made us collectively mentally tougher just having to battle the elements.”

Teammate Cameron Kincaid, who was also named the American Rivers Conference Female Athlete of the Week on Jan. 25, says that Taylor’s success can be attested to her attitude.

“She just built that culture within our team, [she] put in the work, she’s always asking people if they want a rebounder or like asking people to get in the gym early,” Kincaid said. “That really just made our culture awesome.”

With the cancelation of NCAA Division III winter championships, some of the team’s goals may not be achieved this season. Nonetheless, the team is still appreciating every moment they can.

“I think anytime you can celebrate something during this season; It’s a bonus,” Niemuth said.

Individual achievements are one thing, but Taylor doesn’t want all of the credit.

“I just want to thank all my coaches, my teammates, we’ve all put in a ton of work to get to this point, so I appreciate them so much,” Taylor said.

Taylor still has more on the table despite the accomplishment. Simpson has five remaining regular-season games and the A-R-C tournament. Taylor is just 12 points behind Abby Dillon for 14th on Simpson’s all-time scoring list.