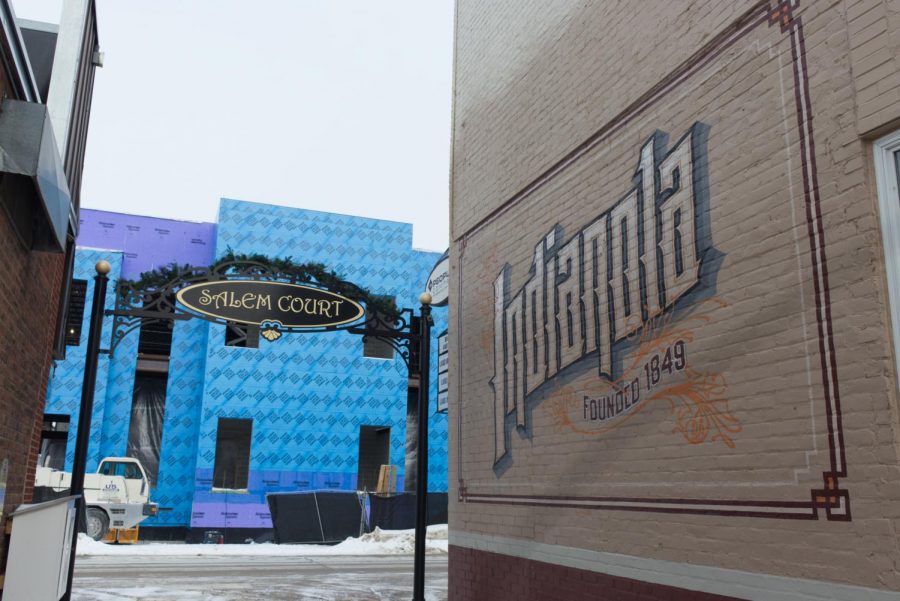 The courthouse redesign is underway in the square, one of the first changes to the downtown area.

The Indianola City Council has finalized plans to redesign streetscape features of the downtown square.

In 2018, the City Council partnered with the Iowa Economic Development Agency (IEDA) to create plans for a new city center, following Warren County’s announcement of a new downtown justice center.

The IEDA recommended two main ideas to the council – to redesign the streetscape features (roads, sidewalks, benches, etc.) and to tie the redesign to Simpson.

One of the changes will include the implementation of two-way streets to replace the current one-way system.

Andrew Parsons, a first-year student at Simpson, was particularly excited about this change.

“I used to have a job on the square,” Parsons said. “When I first started working there – and since I’m not from Indianola – it took me three days to realize one of those streets was one-way, and I got honked at. It seems like a dumb design for a busy area.”

The redesign will also feature wider sidewalks, which allow for trees to be planted, restaurants to have more outdoor dining, and more space for events and activities. The current design has sidewalks in the middle of the block, replaced by shorter 25-foot corner crosswalks.

A committee of 23 members assembled to finalize design changes, including representation from local business owners and Simpson.

According to City Manager Ryan Waller, making sure the redesign integrated well with Simpson also factored into the redesign.

“[Simpson’s campus] is a beautiful, peaceful place. We want to make sure we have that same feeling in the square. If you bring your family on campus for a visit, it’s a nice walk to the square. We want to provide a safe, attractive environment in order to do that,” said Waller.

In an interview, Waller also hinted at the possibility of having electric scooters placed around campus and the downtown area to help connect Simpson to the square.

The city council hopes to put out a bid to potential contractors who will work on the redesign within the next few weeks, and once the council selects a contractor, the redesign will begin.