“Sexual Citizens” event to be held over Zoom on March 17 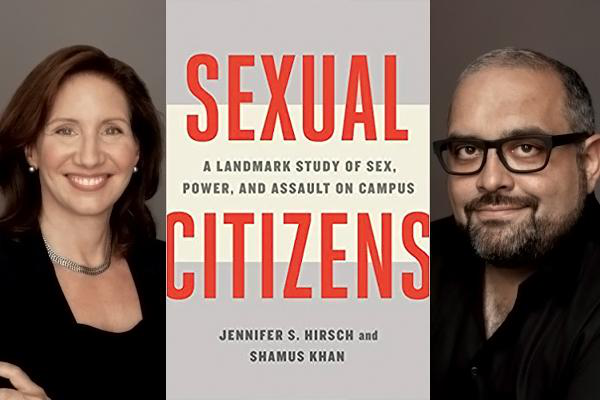 On March 17 at 1 p.m., Jennifer S. Hirsch and Shamus Khan will be speaking to Simpson College students over Zoom about their book, “Sexual Citizens.”

Hirsch and Khan are researchers at Columbia University and their book “Sexual Citizens” speaks about sexual assault on college campuses and what can be done to prevent it.

The two authors regularly speak at colleges about their book. This spring, they will be waiving their speaking fee if colleges buy 300 copies of their book to be distributed amongst the campus. Simpson College counselor Ellie Olson saw the benefits of this opportunity and decided to go in on the deal with Drake University.

“The material is that good,” Olson said. “It does such a good job of looking at the systems that contribute to sexual assault rather than placing the blame on groups of individuals, and I think it’s a conversation that’s much more likely to lead to positive change.”

Brian Steffen, Chair of the Multimedia Communications Department, is another faculty member helping conduct this event. Steffen says that “Sexual Citizens” educates on sexual assault in a more appropriate way.

“Their critique overall is that basically sexual assault training on college campuses is don’t do it… but we know after years of approach is that doesn’t really work,” Steffen said. “What they are trying to do is get students to talk about their experiences in hopes of better understanding three things.”

Sexual citizenship refers to a conclusion the authors made during their research. This being, many students who engage in sexual behavior do so without regard to their partner’s rights and humanity. They argue that we need to do a better job of educating young people about other’s rights involved in sexual activities.

Sexual geography is another question the authors say needs to be answered. Where are students having sex? One conclusion made by the authors is that the way campus society is established, white men control most of the spaces on campus where sexual activities take place.

Steffen says the authors argue sexual education needs to be reframed around these three ideas.

This event will also mark the kickoff of a program called Positive Mentality, which was supposed to debut last year before COVID-19 came into the picture.

The Positive Mentality  program was started at Drake University and can be defined as, “a space on campus to come together to expand the definition of masculinity.”

Olson and Steffen have been working alongside Culver Center Executive Director Seth Andersen to bring this program to Simpson.

“The focus is on helping young men develop individual identities and modes of expression that they are comfortable with,” Andersen said. “This program is trying to get men to just start talking about problems instead of constantly swallowing them all down.”