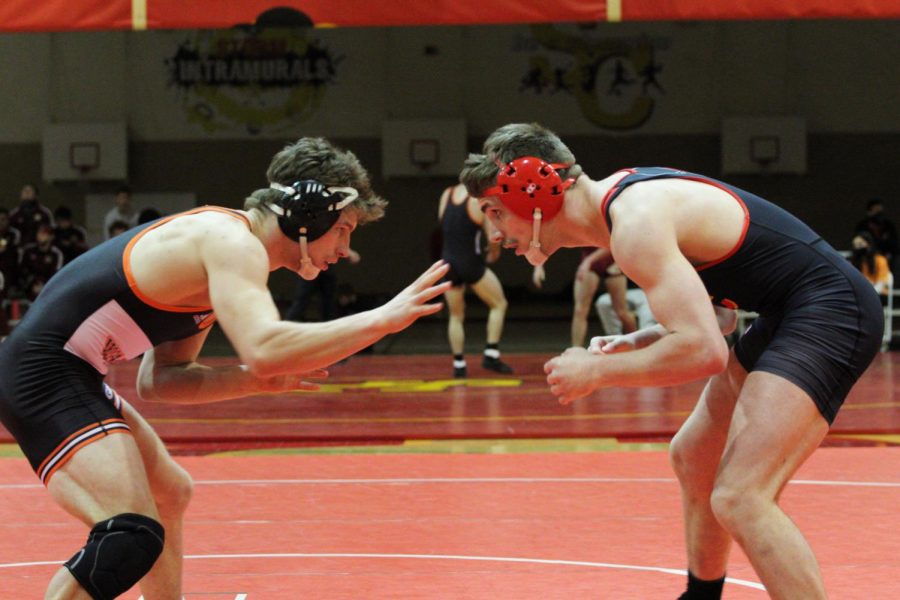 “After the Wartburg dual, our coaches brought us to the locker room and talked about how we need to wrestle through positions and to not stop wrestling,” Langley said. “So that’s what was running through my mind, and in the second period, I started to feel him get tired, so I just got to my offense and put him to his back and got the pin.”

Despite the losses, coach Dylan Peters said that the opponent’s rankings need to be remembered when looking at the scores.

“I think it’s a good opportunity for our program, getting to wrestle the number two and number fourteen teams in the country in our home gym. In terms of competing, I thought our guys fought hard.” Peters said. “We are wrestling good teams, and the American Rivers Conference has always had a strong, rich tradition of wrestling.”

Peters said he looks to work on team members’ work on the mat before their next meet at Dubuque.

“Guys know that if they buy into the system, they are gonna have a chance at the end of the year to make it out if they do things right and buy what we are trying to sell. I think it’s hard when you are saying something, and you are wrestling these top teams in the country, and things are not going your way, but I think having a little bit of success at the end of last year helped us a ton,” Peters said.

Simpson Wrestling’s next meet is against Dubuque and Loras at Dubuque on Saturday, Feb. 6, starting at 12:00 p.m.