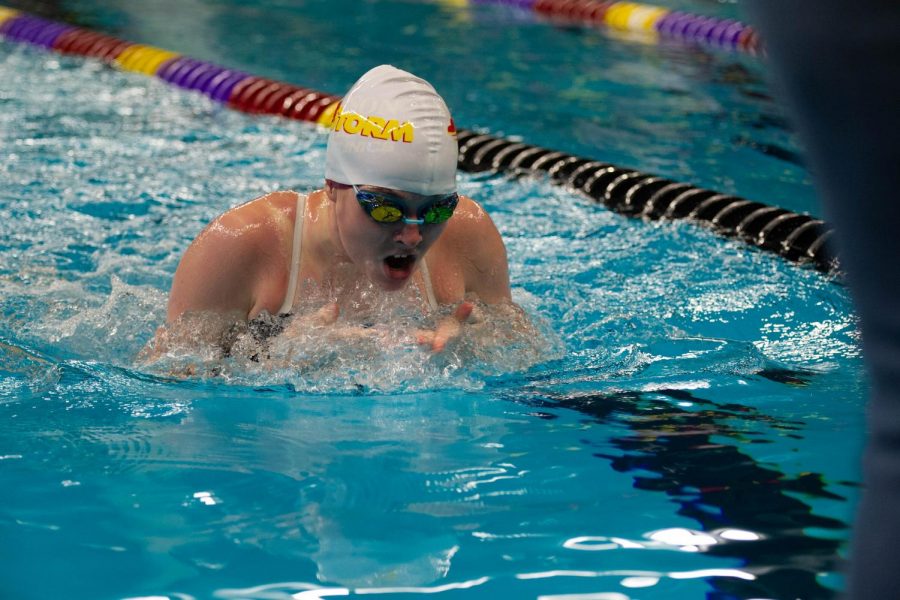 The Simpson men’s and women’s swimming and diving teams dove in for their final dual meet with Coe last Friday but came away with a pair of losses to the Kohawks.

The Storm seemed to be a stroke behind Coe as the women’s team fell 115-60. Senior Madison DePover led the Storm with two first-place finishes, scoring nearly a third of the women’s points for the day. The 200-yard freestyle relay quartet claimed the team’s sole first placemark.

Senior Blake Kakacek ended second in the 50-yard freestyle and 200-yard backstroke, but the men’s team was sunk 135-8.

“It’s going to be hard for the men’s team to pull off a win anytime soon,” Kakacek said. “The focus this year will be on my technique and working to improve my individual times. Since the season has been shortened, those changes are going to help everyone do their best.”

Those changes extend beyond the swimming lanes. After dropping two members of its three members last year, Kakacek is the only swimmer left on the men’s team.

But Kakacek doesn’t see himself as that “sole swimmer” role.

“Being the only male swimmer seems tough, but it’s not as difficult as it might sound,” he said. “I don’t swim alone, and the team has a great group of female swimmers. Honestly, I probably would’ve kept swimming even if I was the only one on the team. That’s how much I love the sport.”

In addition to DePover, another standout on the women’s side was junior Alyssa Harris. The mid-distance swimmer placed second in the 200-yard backstroke and third in the 400-yard individual medley.

Like many sports, Harris says the pandemic has forced the team to make adjustments in how they prepare for events.

“With COVID, it’s very hard for swimmers to even find anywhere to practice,” she said. “If you don’t have access to a pool, you can’t practice at all. But I know a lot of us are cracking down, and we’re giving 100% of our effort every single day.”

With constant testing and a long winter break with no practice spaces, head coach Tom Caccia echoes the same message about their abnormal season schedule.

“We essentially had six weeks on, six weeks off, and six weeks back on,” he said. “In swimming, if you’re off for that amount of time, it’s pretty much like starting all over again.”

Both groups are still searching for their first win in the water this season. Nevertheless, their eight-year coach is pleased with the teams’ progress thus far.

“When I look at six weeks into the season last year, our women are at a better spot this year than they were six weeks in,” Caccia said.

Harris has broken two school swimming records the past two years and has every intention to break her third this season.

As for the team, they’re taking it one stroke at a time.

“We’re gonna stay positive, we’re gonna stay strong, and we’re going to do the best we can,” Harris said. “I think we all have the same mentality right now, and that can really bring us together.”

The Storm will take a two-week hiatus before capping off their winter season at the Liberal Arts Championships in Cedar Rapids on Feb. 18-20.