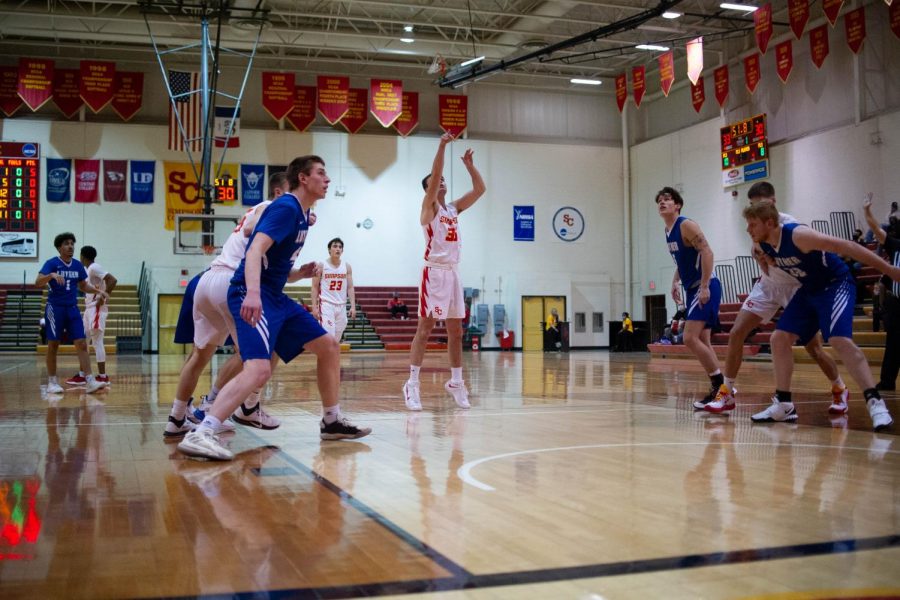 Collin Lister shoots a free throw to tally 9 points on the game.

The Simpson men’s basketball team is off to an 0-2 start for the first time in head coach Brad Bjorkgren’s tenure after losing to Wartburg on Jan. 12 and Dubuque on Jan. 16.

The Storm lost their top-three scoring leaders from last season in Conor Riordan, Adam Reiter and Kyle Wagner. All three graduated, leaving behind a combined 50.4 points per game combined with seven A-R-C all-conference selections between the trio.

With the loss of experience and talent, this start hasn’t been surprising to Bjorkgren.

“Every one of our guys has a new role,” Bjorkgren said. “Even the guys that played last year now all of the sudden have a new role. We have guys now going from seven to eight minutes game to maybe 25 to 35 minutes a game… the hard part is we need to get that done in a hurry.”

Sophomore Collin Lister is a student-athlete that has seen an increased role from sixth-man to the team’s scorer at 11.5 points per game. Lister knew last season that he was going to be expected to step into a leadership role with the inevitable departure of the 2020 senior class.

“With the graduation of three really good players, I was going to have to step into a bigger role,” Lister said. “I was like a sponge, I soaked it all in last year and just kind of watched with those three did, so I do that this year.”

Despite solid leadership from student-athletes in new roles, the challenges of not getting a traditional offseason have caused some growing pains for the Storm.

“Off the court, we’ve always had a really tight group, hanging out and doing stuff together,” Lister said. “But with COVID-19, we’re not supposed to do anything. Not having an offseason to get ready for [the season] has been very difficult and stressful on all of us.”

If the challenge of having a young roster during a rebuilding year wasn’t tough enough for a coach, Bjorkgren was also placed in quarantine on Jan. 19 due to close contact with an individual who tested positive for COVID-19.

“I’ve been away from my team for 12 days, not being able to see them,” Bjorkgren said. “It’s been really hard.”

While away from the team, Bjokgren has used Zoom to connect with players and watch practice and has even texted assistant coaches from home while watching the live stream of the Storm’s first two games. Despite the advances in technology, coaching from home has been an obstacle.

“I can pull [the players] aside and talk to them and try to explain things, but I feel like I’m missing out on a lot of individual coaching for my guy,” Bjorkgren said. “People told me it was gonna be tough, [but] it was probably tougher than what I thought.”

While awaiting testing results, Bjorkgren plans to return on Jan. 28 with a negative test.

After Saturday’s 84-65 loss to Dubuque, Bjokgren had one message for his team over Zoom.

It’s the same phrase that Green Bay Packers quarterback Aaron Rodgers told a Milwaukee radio show in 2014 after a 1-2 start to the season. The Packers went on to finish that season 12-4.

“We need to keep on improving, not push the panic button, including myself, including the assistant coaches, but understand that what we’re doing is trying to put people in the right position for us to be successful.”

Simpson looks to get back on track on Jan. 28 in Storm Lake, Iowa against Buena Vista at 6:30 p.m.