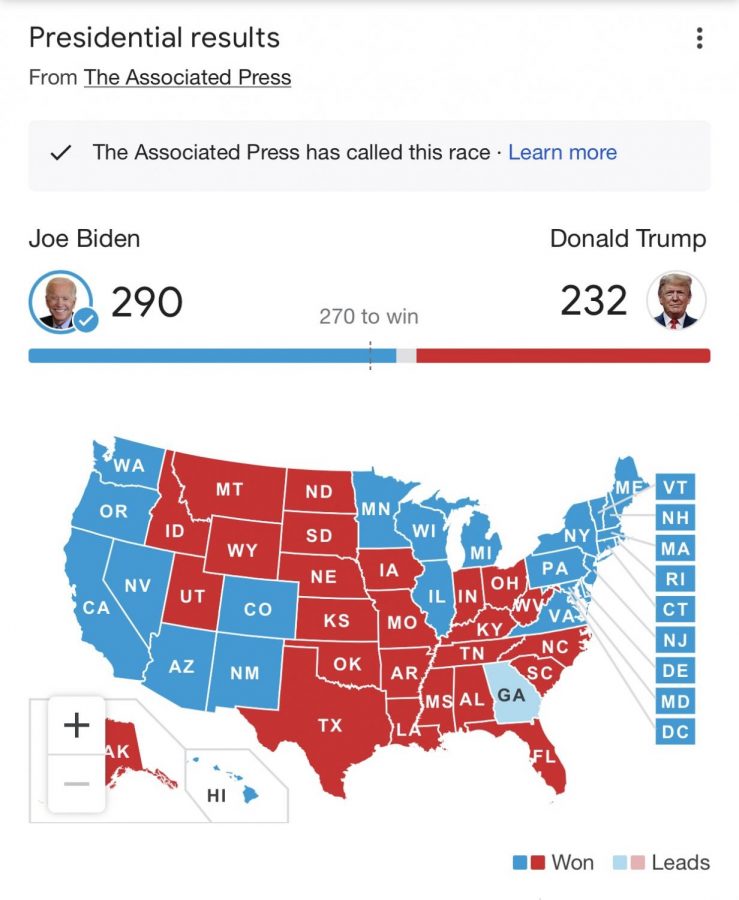 Graphic courtesy of the Associated Press.

After days of nervously watching vote counts, Joe Biden has been declared the winner of the 2020 presidential election. Simpson College students can finally take a breath and sit with their emotions.

Casie Redhage, president of Simpson Democrats, describes the relief felt by many Simpson students after learning the news.

“My initial reaction to President-Elect Joe Biden winning the presidential was immediate joy and then relief,” Redhage said. “As well as realizing that we were going to have our first Black and Asian American female Vice-President, which brought me so much happiness and pride to see another monumental moment in our history.”

For other students, such as Simpson Republicans president Lizzy Adams, it was a day of more somber realizations.

“Questions plagued me like, what is going to happen to our economy? How will we recover? How will this impact my family? Will he pack the courts? Will Democrats win control in the Senate?” Adams said. “I am fearful that many businesses will struggle to stay afloat if many of Biden’s policies are put into place.”

Other students, such as junior Rady Malcom, felt a different form of relief.

“My initial reaction was really one of indifference. I get so terribly sick of the toxicity from both sides of politics in these recent years,” Malcom said. “I was just glad for it to be done because what flies over a vast majority of people’s heads is that the President doesn’t have much bearing on their life.”

While the vote count shows that Biden is the clear winner, Donald Trump claims that this is only because of mass voter fraud. This is an issue that has caught the attention of some Simpson students.

“Every election has voter fraud, and if you think otherwise—well then—I have a bridge to sell you,” Malcom said. “Counting discrepancies, vote spikes late into the counting, and unusual turnouts certainly have me following the story… Nevertheless, as far as I’m concerned right now, Biden is the presumed President-Elect.”

Other students, such as sophomore Alex Fuller, are not worried about the idea at all.

“Absolutely not, Trump has lost every lawsuit up to now, and it’s just an attempt to get people not to accept the results,” Fuller said.

Another concern that has been sweeping through the nation is Trump’s willingness to step down from power peacefully. Fuller agrees with this opinion saying, “he’s already stated he won’t leave pretty much.”

Redhage is less worried about this fear.

“I do think Trump will peacefully undergo a transfer of power. I think a lot of people are nervous because of all the lawsuits he’s filed. But I think an important thing to remember is that is normal,” Redhage said.

Adams, a Trump supporter herself, also has faith Trump will peacefully concede.

“I really hope that he will. I think it will depend largely on the amount of voter fraud that is found. This was a very close election in many states, and both candidates had a record number of votes, but at the end of the day, the people chose Biden,” Adams said. “I may not be happy about it, but we must respect our system and come together. I think that Trump is a fighter to the end, which is why many of us favored him.”