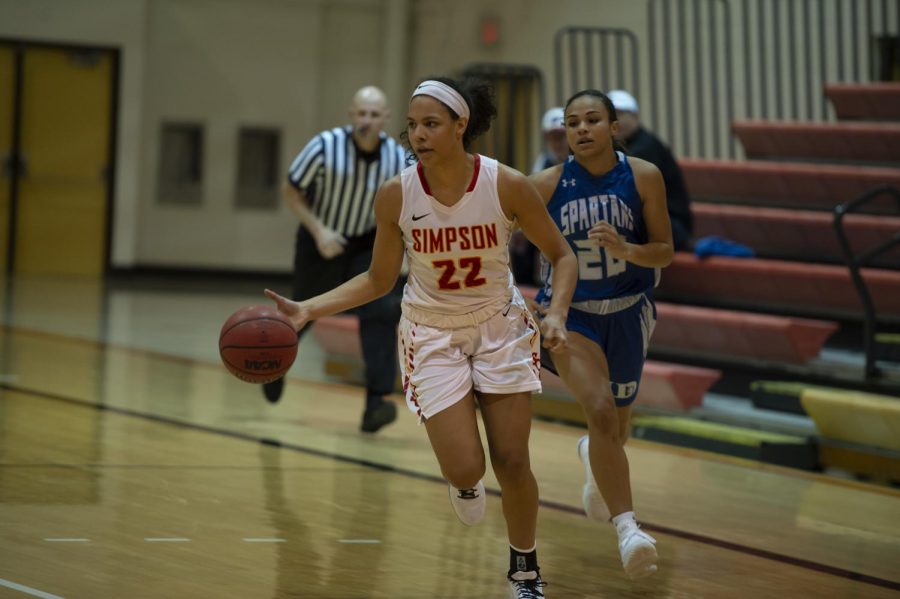 Courtesy of the Simpson Information Department

Nash streaks down the court past a University of Dubuque defender during the 2019-20 season.

It’s always a boost for the team when a player has a standout season, especially if you’re sophomore Cassie Nash, who had one her first year in a Simpson uniform.

During the 2019-2020 season, Nash began her college career starting all 26 games for the Simpson women’s basketball team and finished as the top freshman scorer in the American Rivers Conference with 11.3 points per game. She also led the Storm in field goal percentage at 54.8 and in blocks per game with 0.6.

Despite her talents on the court, Nash attributes her early success to the improvements she made before college.

“Throughout high school, I felt I had a good support system with my coaches,” she said. “What I struggle with most is confidence, so them helping me build that into my freshman year and having the same support from my team and coaches here was special. Just having people that believe in you really motivated me to do well.”

The Lincoln, Nebraska native was also named Co-Defensive MVP for the women’s basketball team and won Newcomer of the Year, an award presented to freshmen who have had outstanding seasons in their sport.

“It’s not something I was really expecting because throughout the year I was more focused on how the team was doing instead of my individual performance,” Nash said. “It felt really good though, knowing that I actually had been making a difference on the court.”

After the basketball season, the guard plans to showcase her skills at the forward position on the soccer field, which was initially her favorite sport.

To avoid feeling regretful not playing, Nash expressed to head women’s basketball coach Brian Niemuth in the summer her desire to play basketball and soccer. Niemuth then reached out to head women’s soccer coach Jeremy Reinert about the possibility of Cassie joining the team.

“We had already planned to share one player, so adding Cassie was not going to be an issue logistically,” he said. “I already knew Cassie from high school soccer and knew she would be a great addition to our team.”

Reinert believes Nash is a natural goal scorer and will be a good fit in their system. More importantly, he praises her coachability.

“She is a talented player, that doesn’t bring any ego to the training facility,” he said. “She wants to be pushed as a player so that she can be at her best for the team, and that type of player is extremely fun to coach.”

That same admiration is shared among her teammates on the hardwood.

“I think Cash is one of those players that I am thankful to have on my team because if I were playing against her, I know that I would be in trouble,” senior forward Cameron Kincaid said. “As a team, we know she is something special and we’re lucky to have her.”

With winter sports competition pushed back to Jan. 1, Nash sets her sights on the upcoming basketball season. Even with fewer games, the sophomore is just happy to be able to compete.

“I love playing and being with the team,” she said. “I really have a competitiveness to me so being able to still have games and practices is definitely something I’m looking forward to, even if it’s different from last year.”