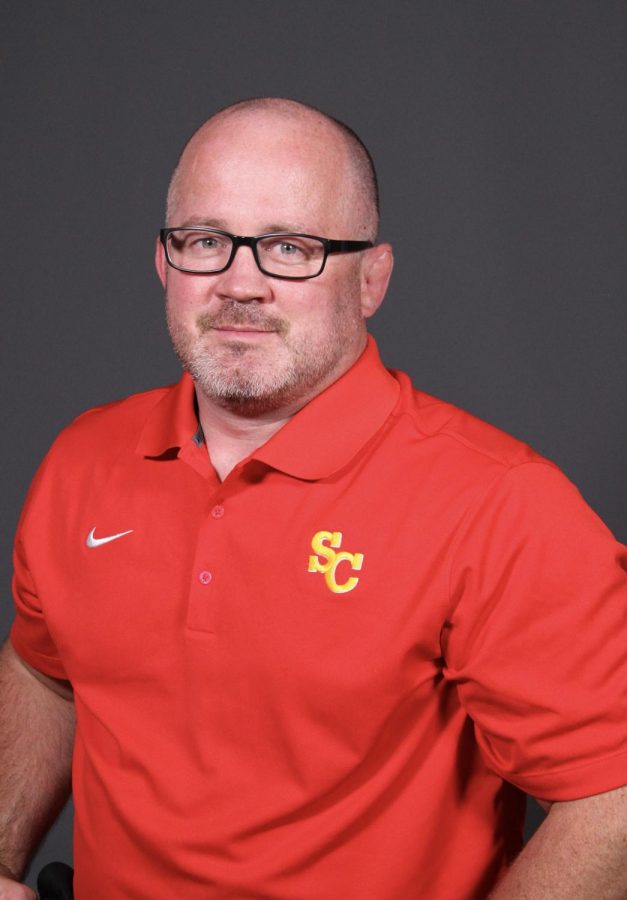 Simpson wrestling head coach Dylan Peters and the wrestling program hired the former University of Iowa and two-time Division I National Champion Jeff McGinness as an assistant coach on Sept. 21.

“I’ve always been involved in wrestling but had never taken that jump to be involved in a program,” McGinness said. “It’s a great opportunity because of my desire to get back into coaching.”

In college, McGinness held a 127-16 record while winning two National Championships in 1995 and 1998. He was also named an All-American three times throughout his career as a Hawkeye. At Iowa City High School, McGinness went 172-0 as he won four Iowa State Championships.

A well-known name is a huge part of recruiting, but McGinness is also able to add his communications degree into forming relationships with recruits.

“His ability to talk to [recruits] and build those relationships, that’s what will help our recruiting,” Peters said.

In college, McGinness was coached by Olympic Gold Medalist Dan Gable, who is widely considered as one of the greatest wrestling minds of all time.

“Having a background of excellent coaches that I wrestled for,” McGinness said. “[Being able to] pick and choose the tools and techniques that made me a good wrestler, I hope to use them for the wrestlers here.”

The student-athletes from Simpson will be able to benefit from a former National Champion by asking questions about technique and mental toughness.

“It adds confidence; we have a guy who has achieved the highest level of success at the NCAA,” Peters said. “Guys can ask him questions.”

Storm wrestlers aren’t the only individuals learning from McGinness. Peters himself is learning daily from his new assistant.

As for McGinness, he has a lot to learn about coaching at the college level. Since graduating from Iowa, McGinness has coached at wrestling clubs while also dabbling in personal training, but this is his first gig at the collegiate level.

At Simpson, McGinness will learn about the culture, tradition and styles used in the program throughout his first year. While also being able to learn from Peters and his own coaching tree.

While McGinness was winning National Titles in the ‘90s, Simpson Wrestling was also thriving. In that decade, the Storm had 17 Division III All-Americans, along with three National Champions.

However, Simpson hasn’t had an All-American since 2006, making it a 14-year drought. Peters and McGinness look to return to the days at the top of the American Rivers Conference and the NCAA.

“Simpson has a good history; we want to bring that history back,” McGinness said. “To the top of Division III.”

Due to COVID-19, the start of the season has been delayed, but the Storm starts practice on Jan. 23 behind the leadership of Peters and McGinness.