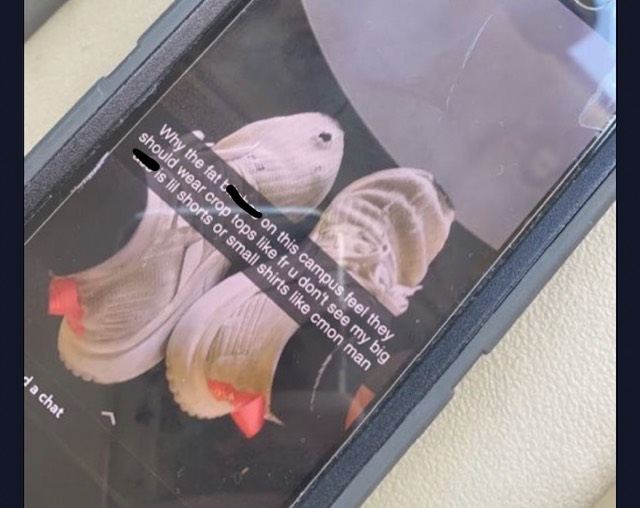 by Peyton Busch and Jake Brend

A Snapchat from Henrichs that surfaced on the internet read: “Why the fat b—— on this campus feel they should wear crop tops like don’t see my a– in shorts or small shirts like man.”

Senior Tatum Clayburn tweeted out a photo of this image, calling out Henrich’s comments about body shaming.

“The comment that Cole made was unbelievably misogynistic,” Clayburn said. “The fact that men or anyone for that matter think that they have the right to police what women do and do not wear is obtuse.”

Senior Hannah Parks was one person who was highly affected by the comments Henrichs made.

“I didn’t really know who this person was, and it was sent in a group chat to my sorority,” Parks said. “I looked down at myself, and I’m wearing a crop top, and I’m sitting in Kent in a very visible area, and I am like, okay, now I’m really self-conscious.”

When Henrichs was asked to comment on the situation, Henrich said: “Coach Jeter will handle all questions on this topic.”

In a statement that Jeter put out to the Simpson community, he took the fall for the mistake of one of his athletes while stating that he would deal with the problem within the program.

“Yesterday, we stumbled,” Jeter said. “Today, we are picking ourselves up and course-correcting as a team, as representatives of Simpson College, and as the men, we desire to be as leaders of the campus and community.”

Scott Oderio, a senior at Simpson and football teammate, expressed that Henrichs should write a public apology.

“He’s already issued a formal apology to the team internally,” Oderio said. “I think that needs to continue whether that’s like to the public or if that’s him going out on Twitter and formally apologizing. I think that there needs to just be more accountability for stuff like this and more of an open dialogue to talk about why it was insensitive and the wrong thing to do in the first place rather than just like shut it down.”

Oderio expressed that he believed that Henrichs comments should not be seen as the opinions of the entire football team.

In reaction to the comments, Henrichs made about students, both men and women decided to wear crop tops in solitude for the events of Thursday.

“I am very pleased and reassured by the campus’ reaction to his comment,” Clayburn said. “I was even more so when the men on campus started to call Cole out. I even had a few of the football players reach out to me. Some said thank you for calling him out; others just reached out to check in and make sure that I was feeling okay.”

Junior Will Exline was disappointed in the comments but was blown away by the support from the student body.

“I was very upset because many people, including myself, struggle with their body image,” Exline said. “[Cole’s] Snapchat shamed women for having bodies that didn’t fit within his idea of beauty. However, the initial response from Simpson students was inspiring, and deciding to wear the crop tops today was a great message of solidarity.”

Parks was happy to see the number of students that showed their support.

“I think it’s been honestly really incredible, I’ve felt a lot of support and a lot of indignance from the women on this campus and anger that’s been channeled in a way that’s really productive,” Parks said.  I’ve never really seen people react to a comment like that in such a way.”

Parks shared her advice for anyone who has been body-shamed.

“Being body shamed is a very personal individual thing your relationship with your body can affect how you view yourself on a mental and emotional level,” Parks said. “And obviously, we all want to have a positive relationship with our bodies. Unfortunately, that doesn’t always happen. It sucks, but it’s not true like it is awful, but it isn’t reality. My life has come from other women, and in the end, a lot of these other women wound up being pretty self-conscious themselves. So go talk to someone and get support. It’s incredibly amazing what support can do for yourself and your relationship with your body.”