Vice presidential debate, Harris vs. Pence: the fight for the presidency 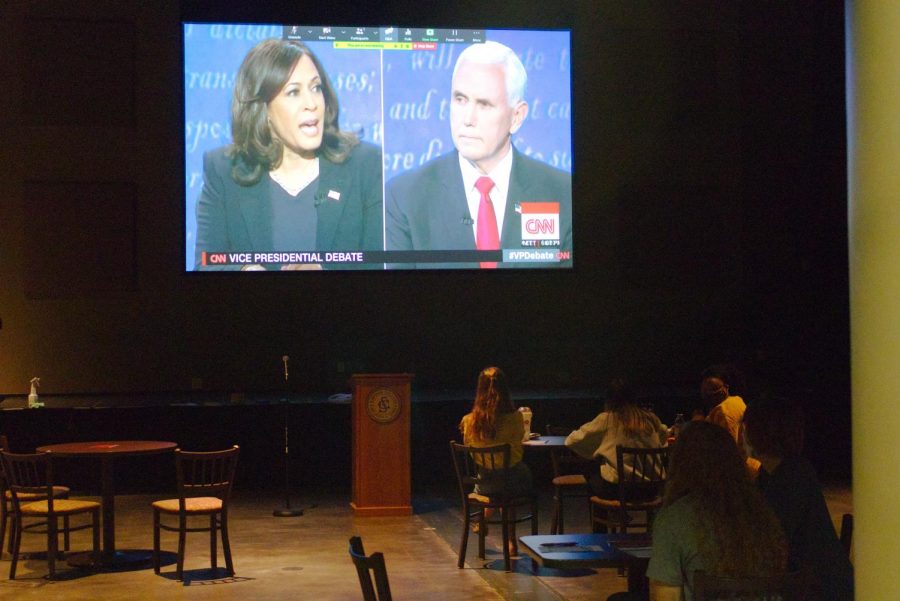 The deliberation got off to a hot start when Senator Harris called out President Trump’s transparency with the public on his COVID-19 response.

“Joe Biden has been transparent, and Donald Trump has not been,” Harris said. “[Biden] puts it all out there.”

Harris did not directly answer the question and instead used the question to put heat on the Trump administration for rushing Barret’s nomination.

“The American people deserve to make the decision about who will be the next president of the United States, and then that person can select who will serve for a lifetime on the highest court of our land,” Harris said.

The students in the room each had their own opinions on how the debate went, but one thing was clear: it went better than the one on Sept. 29 between President Donald Trump and former Vice President Joe Biden.

Sophomore Jordan Courtney saw the debate as a tight discussion, where neither candidate was pulling ahead of the other.

“It is a very close debate,” he said. “Both candidates are trying to advocate for their campaign in different ways.”

He showed an appreciation for the candidate’s willingness to discuss their policies on certain issues, rather than to constantly interrupt each other.

“In comparison to the last debate, it is going much better,” Courtney said. “There was a good amount of professionalism shown.”

Senior Katie Cardoza saw the debate as an improvement, but she still felt disappointed by Pence in particular while watching the pair dispute.

“It was disappointing to watch her [Kamala Harris] sticking to the facts while Pence is loose with what is a fact,” she said. “Pence’s stances on abortion are not shocking, but their discussion about climate was good.”

Senior Rezadad Mohammadi is an international student and cannot vote in this year’s election, but that did not stop him from taking in the discussion.

“I like to know more about each candidate’s policies and how they are impacting immigrants,” he said. “Foreign policy is always a topic where [the nominees] act more welcoming than they really are.”

Mohammadi also did not care for the extensive discussion the candidates had about China when there are other issues happening around the world.

“I want to learn more about how they feel about Isreal and Iran,” he said. “They talked about China too much, in my opinion.”

The watch party also supplied bingo cards with the squares, each being filled with something to watch for in the debate, such as the “Harris stare” or discussion about Biden’s health, and prizes were available for those who secured a coveted bingo.

The third presidential debate is scheduled to take place on Oct. 22 at the Curb Event Center at Belmont University in Nashville, TN.