The new reality of recruiting 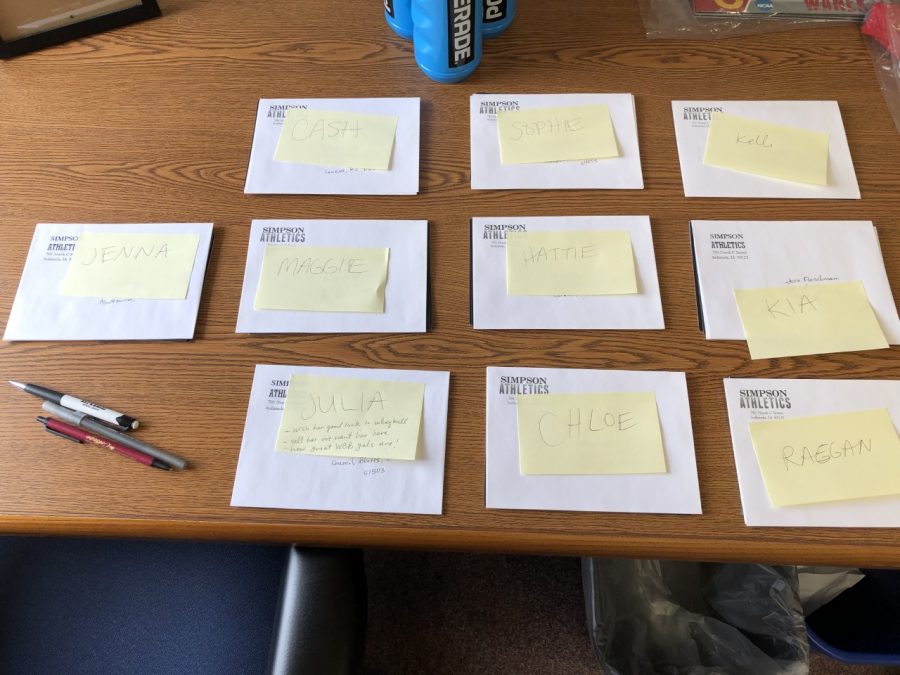 Letters from players on the women’s basketball team are being prepared to mail to recruits.

Among all the changes Simpson athletics has had to endure this year, there is another facet of campus life to which coaches and players have had to adjust: recruiting.

Athletic recruiting is similar to that of a normal prospective student. It involves a tour of campus and facilities, a 1-on-1 meeting with the coach and professors, and eating lunch with current players on the team.

With the presence of COVID-19, however, assistant football coach and recruiting coordinator Dan Kelley believes the experience has been different than usual.

“I always talk about wanting to bear hug recruits once they get on campus, but I can’t right now,” he said. “We can’t bring the recruits into our offices anymore, so we have to meet in a larger area. We also miss out on having lunch on campus together, and they generally don’t get around our guys very much, that’s a part of it too.”

The process is personable under normal circumstances. But with elbow bumps instead of handshakes, it has been tougher to make recruits feel welcome and a part of the tight-knit Simpson community.

Still, Kelley has found a positive amid the precautions.

“Over the summer, we had 400 virtual visitors so we could talk about our program,” he said. “We’ve had 40 guys on campus this fall, so we’re ahead of where we normally would be mainly because we have more free time.”

Another element of the recruiting process is practice. Typically, recruits are taken to practices during their visits to assess how they’re structured and to see the nature of the team outside of game day.

Assistant women’s basketball coach Moran Lonning plays a large role in recruiting for the team and thinks current prospective players don’t get a true idea of how practices are run at Simpson.

“It’s tough because practices now don’t look like how they normally are,” she said. “So it’s kind of balancing between if we’re allowed to have visitors… and if we even want them coming to a practice that is in pods. We don’t want them thinking, ‘that’s how Simpson does it’ when it’s actually a result of COVID.”

Competition is also affected. With altered seasons, recruits can’t experience the energy and excitement of a collegiate sporting event.

This can lead to the potential of Division III athletics not being at the top of a high school player’s list of college choices.

“They do not have a model of what it is like on game day,” senior tight end Jeramy Randol said. “That is one of the most important days in the eyes of the recruit because it shows the environment that they would be playing in for the next four years of their lives.”

The Crisis Management Team recently approved the transition into the yellow phase, allowing for group gatherings of up to 35 people. Yet, teams continue to practice in pods to maintain social distancing.

Nevertheless, athletes and coaches are remaining positive in the recruiting process and optimistic for the future.

“Recruiting is actually the one consistent thing that I can always control, and I think it’s actually a comfort,” Lonning said. “Our players just grind out each day and try to get better, and I think that’s something we can all control right now.”