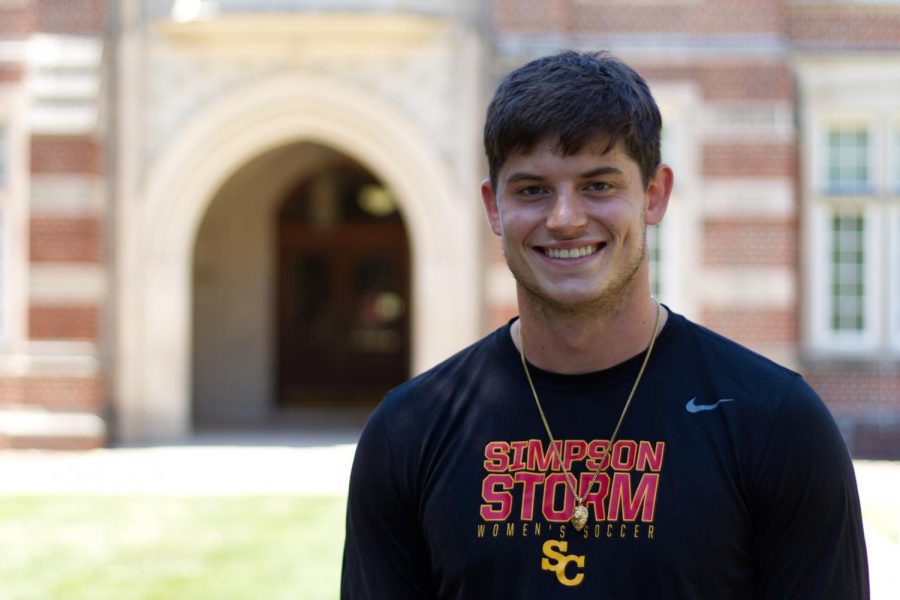 The year 2020 has not been easy for anyone. COVID-19, social justice issues, the election, almost going to World War III (which at the time seemed like the worst thing possible,) and so many other developments and events affecting people all over the world. COVID-19 took some of my friend’s last seasons. Some people won’t be able to get jobs until this is all over. People live in fear. But most importantly, people are dying from this virus.

I miss Simpson from a year ago. Things that I used to complain about on this campus don’t seem very important anymore. The worst thing that would happen to us last year was that Pfeiff sucked a specific night. Right now, I would do anything to sit down at that dining hall and eat chicken nuggets and crappy pizza with my friends.

I never realized how much I took for granted with a football season. Last Saturday, we were supposed to play our first game in Texas. Then we had nine football games after that; right now, I would do anything to play one game with all my friends. I don’t even care if we have to play in the Hy-Vee parking lot.

I haven’t played a full game for Simpson yet, but just being a part of a season or a game, even if I’m signaling plays from the sideline, I would go back to it in a heartbeat.

I am not a partier, and I don’t drink, but yes, I even miss the disgusting football house because I love being around people. It doesn’t even matter if it’s a party, just being around people makes my mental health go through the roof with happiness.

Right now, my mental psyche is not doing too hot. I feel upset 24/7 because I’m just sad that all of this is happening right now. If you’re someone who is going through this school year with no hiccups or let alone focus on class, I commend you.

I hurt my knee this summer and was told I possibly tore my ACL. Thankfully it wasn’t; however, it was a pretty severe hamstring injury, and I am still dealing with it after two months. I am telling you this because one of my favorite stress relievers is doing sprints until I pass out, but I haven’t been able to do that for two months, so it’s safe to say there is some added stress.

Now it feels like we’re all walking on eggshells with all of the regulations put in place. We can’t go anywhere without mentioning COVID-19. We’re not allowed to go into any of our friends’ rooms. We’re not allowed to sit down at Kent and work on homework. I can barely workout on the football field without almost getting expelled. And if we do any of those things, Residence Life and Luke Behaunek will send us home.

Don’t get me wrong; the regulations are the right thing to do to limit exposure to the virus and protect students. I’m appreciative to be in Indianola and on campus, but it isn’t the same.

I have had a couple of email exchanges with Behaunek talking about the policies, and I think he has the hardest job on campus because I know for sure that I wouldn’t want to be in charge of all of us. Regardless, he isn’t making it easy.

Think about this. When someone in prison does something bad while incarcerated, where do they go? To Isolation. When we act up, where do we go? Isolation. Being isolated is quite literally one of the worst things that you can put the human brain through.

An article published by The American Psychological Association talks about prisoners who are in solitary confinement are “at grave risk of psychological harm.” Kind of sounds like a similar situation to me.

Code orange, as I like to refer to it, is going to be my demise. I am an extrovert, which means I love being around people. People are awesome. Code orange is the exact opposite for someone like me. I really would’ve loved to be in the meeting that said, “Let’s bring them back to campus, but they aren’t allowed to see their friends, they can’t play sports, some of them can’t go to class and still charge full price.”

Yes, they have to charge full price because if they didn’t, Simpson College would not exist, which is whatever.

Even though the college is easing the restrictions with a “modified” orange phase, it still sucks because, whether or not you get one extra person, students still don’t get to do what they used to.

Once again, I’ll say that I do believe that residence life and Simpson are doing the right things in order to keep us safe. I don’t think they are going too far with the restrictions, because if you look at other schools in the state, they are struggling to contain COVID; props to us. But just because I think that doesn’t mean I’m not bored, sad and a little pissed off.

We love Simpson College. If you didn’t, why are you here? We continue to come back every year because we love and care about this place. Only going to my room, then class, and back to my room, every single day sucks. It is horrible for all of us. I feel completely drained, and we aren’t even a month in. I don’t feel that way because of what I am doing; it’s what I’m not doing.

I miss being able to go workout in the weight room whenever I want to. I miss being in a crowded classroom. I miss sporting events, playing, or spectating. I miss scanning my ID to get into my friend’s building and letting myself in their room to hang out. And dang it, I miss sitting in Phieff and eating those chicken nuggets.

This year has been hard for everyone. I miss Simpson College, and I hope we will eventually be able to go back to normal. Sooner rather than later.