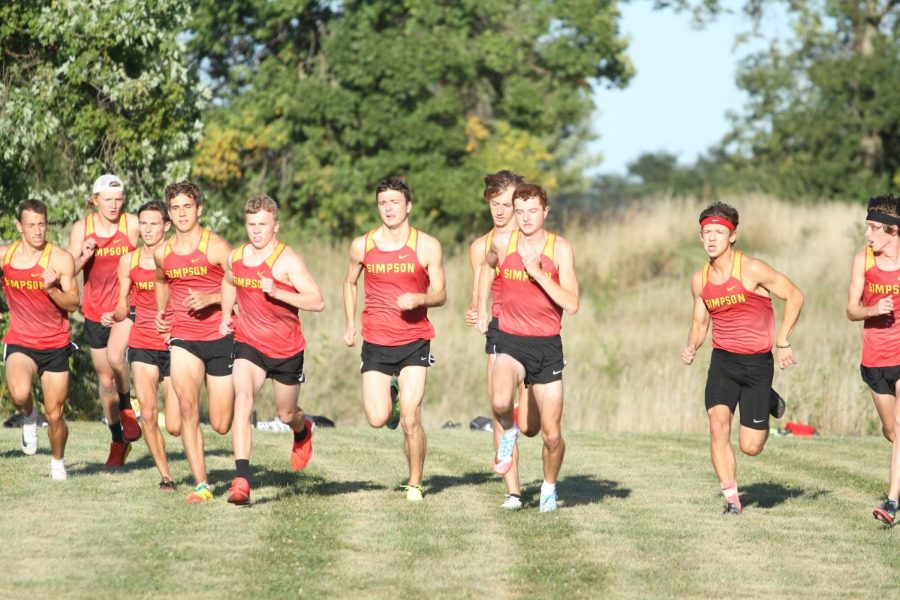 Photo by Zach Newcome, Special to the Sports Communications Department

Men’s cross country opened the 2020 season with a win against Nebraska Wesleyan this past Saturday, with eight of the top 10 being Simpson runners; the women’s team placed four first-year students in the top six.

Head Coach Heath Moenck, coming off of a promising inner-squad meet last week, was excited to have his teams open up the season against Nebraska Wesleyan.

“Best team year in 10 years and Saturday was a good response to that statement because they ran like a really quality team,” said Moenck. “We really wanted to match Nebraska Wesleyan person for person, our one guy beats their one guy, our two guy beats their two guys, and we were able to execute that, position for position.”

Sophomore Spencer Moon won his first career race with a time of 19:39.69 in the men’s 6K, senior Harry Dudley followed his teammate with a time of 20:27.27 and a second-place finish. Six other Simpson runners placed in the top 10 to secure the win against Nebraska Wesleyan.

“Just got out a little hot, just kind of anxious to see competition for the first time in a while,” said Moon. “Towards the end, I was hurting pretty bad, I was just trying to hang on and get to the finish line and hopefully finish somewhat strong and not walk it in.”

Moon, coming off of a strong freshman year, continued his legacy this weekend, finishing at the number one spot.

“A guy of his caliber…he’d be the one runner in most programs in the country,” Moenk said while describing Moon’s performance this weekend.

Junior Cat Lucht, last year’s most valuable runner, rallied to a strong fifth overall finish with a time of 20:59.52 in the women’s 5K. Lucht was followed by freshmen Lara Kallem with a time of 21:12.11 and Ashley Rockhold with a time of 21:32.58 finishing sixth and seventh, with Sophie Hall finishing with 21:36.02 ended up eighth to cap off the top performances for the women.

“Staying consistent, I know a lot of times I could start a race and feel strong, but then I get to that last mile to go and I start feeling tired,” said Lucht when asked about her mentality before the competition.

Lucht is already looking forward to next week’s meet and getting back out on the course, ready for more.

“Looking forward to next week, I think we can really take that momentum of doing so well last week and get excited about running even better next week,” she said.

The Storm will head east to Dubuque, Iowa on Saturday, Sept. 26 to face off for the Loras Triangular.