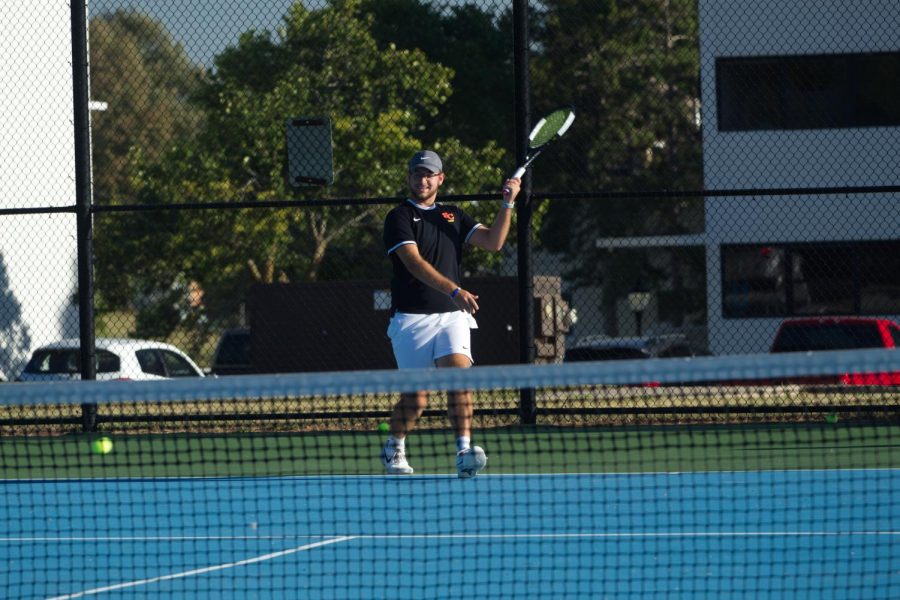 Two players on the men’s tennis team were in quarantine throughout last week, one of whom tested positive for COVID-19.

As one of only three fall sports to continue their season, the entire team, along with other current fall athletes, were tested for COVID on Sept. 2 through the Test Iowa location on Simpson’s campus. Results were then emailed to teams on Sept. 4.

Out of the nine members, the results for sophomore varsity player Chase Henry came back positive. He was then sent home to isolate for 10 days.

“When I received my results, I was surprised, to say the least,” Henry said. “Luckily, I am still symptom-free. For the safety of teammates, fellow students, and the other schools we hope to compete against, having mandatory testing is completely understanding for everyone’s safety.”

Sophomore junior varsity player Jake Brend was the second player who was instructed to isolate. Although he tested negative, Brend was in close contact with Henry while sitting in class and was required to separate himself from others on campus for 14 days.

“As soon as practice ended I went and packed up my stuff because I knew that I’d have to go home for two weeks,” Brend said. “But our coach found out soon after that our team, other than me and Chase, would still be good to practice.”

Tennis is a socially-distanced sport in itself but the crisis management team intends to treat all positive cases with the same level of severity.

Interim athletic director Keith Hackett affirms that athletes who have tested positive on campus receive similar treatment as all other students.

“Athletics is fully supportive of the campus guidelines and protocols developed by the crisis management team when a student tests positive,” Hackett said. “We also have developed a ‘Return to Play’ protocol that all student-athletes will have to follow to ensure they are in good health and able to return to competition when they return to campus.”

The “Return to Play” protocol is specifically intended for student-athletes who have suffered an injury or illness. Affected individuals will then have to wait an additional week before being allowed to practice and compete.

Henry returned to campus Sept. 13 and Brend will not be able to return until this Saturday. However, neither were fully notified of the “Return to Play” protocol during their time in quarantine. Head coach Matt Price was not made aware either.

“The athletic department did not inform me of this until I was back on campus,” Henry said. “This is completely unnecessary for athletes who are asymptomatic… I have no choice but to waste a whole week during a very limited fall season.”

Aside from the frustrations of post-quarantine, Henry and Brend are looking forward to hitting on the courts again.

“It’s one of the most normal things going on,” Brend said. “It’s just therapeutic and relaxing to be able to go out on the courts and hit every night.”

Most importantly, the team is determined to achieve something they’ve never done before: make the conference tournament.

Men’s tennis will host Cornell College for the home opener on Sept. 24 at 2 p.m.