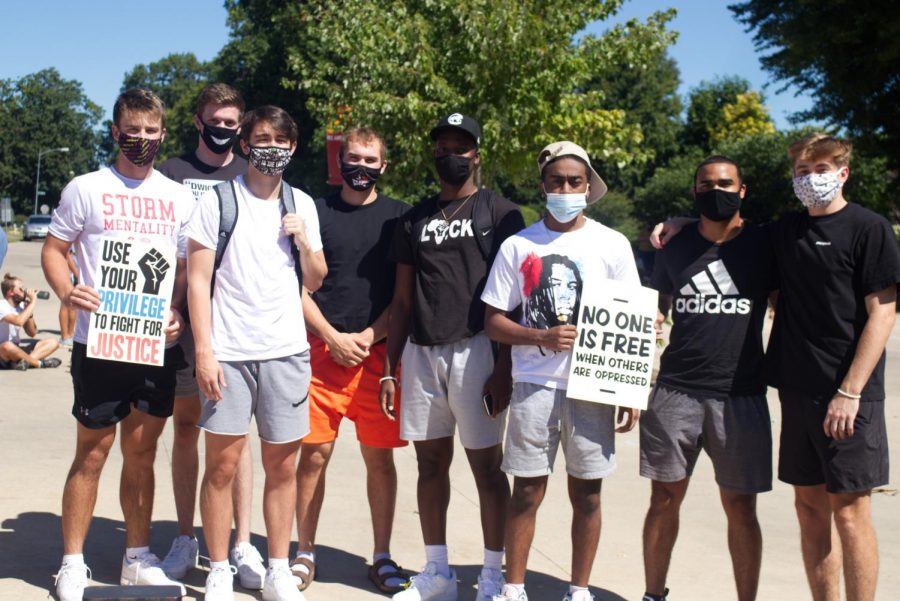 Last week, students participated in a protest in support of students of color at Simpson College. In the days that have followed, students of color came to terms with the collective trauma of recent events, going through the healing process and looking toward future steps.

Tatum Clayburn said she has been reflecting on herself as an individual, including questioning who she was and what her values were. Seeing the support from the Simpson community at Wednesday’s protest has helped.

“I think that as of right now, I’ve had time to reflect and it sounds bad, but I’ve kind of had to ignore it for the last few days,” Clayburn said. “Because as a minority, you always are in that spot to educate people. It’s always in the back of your mind thinking about race, equality and intersectionality. I think the last four days have been really nice because a lot of the white students and the white people on campus have taken that step to put race and inequality in the back of their minds, so we don’t have to as much anymore.”

For first-year students struggling with school, the stress of a pandemic and racist incidents on campus, Clayburn recommends reaching out to others to find support.

“I would say asking for help in the sense of if not asking your professors then asking other students,” Clayburn said. “I’ve been reaching out to a lot of minority students who are first-years, but I also think for first-years finding that one professor that understands them is super, super important. And then I would also say utilizing the health services and counseling services.”

Pascasie Redhage said she viewed her experience differently from others. Redhage said that, while she took it hard on Tuesday and Wednesday, she didn’t check in with herself until Friday. She felt that she needed to push herself and that there was too much to do to take time for herself.

“What I’ve taken away from this has been that everyone deals with everything differently,” Redhage said. “I went to class yesterday and today for the first time in a week, but I still haven’t had the strength to sit down and do all the homework. I think it really does show that everyone needs their own time to process traumatic events and overwhelming experiences. I’m still going through it.”

As the year moves forward, Redhage said it is important to know discriminatory incidents like that of last week aren’t new and are likely to continue unless there is change. She hopes that the Simpson community understands discrimination isn’t limited to the previous week and that students will continue to speak out, particularly for their peers who are students of color.

“Every single person of color you see walking around this campus probably had some sort of prejudice or discrimination done towards them,” Redhage said. “When we say we’re tired and we’re exhausted, it’s not because we’re marching, it’s because we continually have to face these issues. They constantly build-up, and I hope people understand how deep issues of racism and discrimination actually go, and how it’s not just the surface level of what we share to everyone, but it’s the things that we keep hidden from everyone around us.”

There was a moment during the march when protesters passed Irving Elementary School that stuck with Radhage and many others. As the protesters passed, children could be seen lined against the classroom windows, watching and waving. It was a moment that solidified the protest, and the events leading up to it, as part of both the Simpson College and greater Indianola community. For Redhage, it was a sign of promise and a point of pride.

“Seeing that something we did reach all ages of people to me is super important,” Redhage said. “Especially with young people whose minds and thoughts are still being shaped. To see people out there pouring their souls and yelling their hearts out about wanting their life to matter and wanting Black people to be recognized, I think even though it’s sad that young people have to have those conversations, it is a conversation that they need to have. So being introduced to it in that sort of way, and seeing that people are excited to see other people doing that, makes me feel really proud and like we did something very important that needed to be done.”