The mastermind behind the Acorn 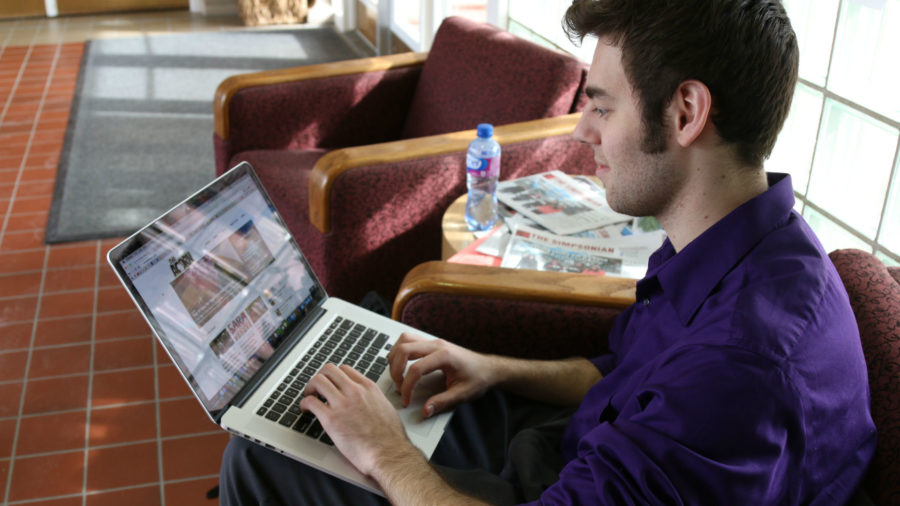 Rooted in edgy satire and mediocre comedic writing, the Acorn has germinated into a thriving source of entertainment for Simpson College students.

The idea of a satirical newspaper — similar to The Onion — sprouted one day by co-founders Nick Hermon and Robert Lyons walking out of a Beginning Newswriting class.

The publication’s first article, “Homecoming royalty vie for control of campus,” a “Game of Thrones” parody written by Lyons under the pseudonym Lionel Robertson, defied nearly every rule in the AP Stylebook — a journalist’s bible — but was massively popular on social media.

Thus, the Acorn was planted. Growing the club would take a lot of work, and Hermon, a public relations major, was willing to dedicate just that.

“I would spend more than 20 hours a week (on the Acorn),” Hermon said. “We needed a story every day with a graphic, so that’s at least two or three hours a day.”

Originally he used Microsoft PowerPoint to modify and edit photos until he learned how to use Adobe Photoshop — a more professional editing software.

Hermon’s extensive knowledge of digital content, including GIFs, videos, WordPress widgets and more, can be attributed to the Acorn’s unique role in Simpson student media.

A host of his own channel and a member of the Iowa Dudes on YouTube, Hermon was able to bring experience and technological savviness to the newly founded club.

The ultimate goal, he said, was to have fun.

“We wanted to promote campus events as well through funny stories because there were a lot of complaints with the whole email policy going on at that time,” Hermon said.

The Acorn quickly deviated, however, from its original mission, he said.

“I think we knew what our audience wanted,” Hermon said. “So, that’s kind of where we went. They love squirrels. We write a lot of squirrel stories. There’s a lot of theatre people that like our stories.”

One of their most popular stories, “T’was the Night Before Finals,” shot and edited by Hermon, set a precedent for whimsical and uncanny storylines.

Targets of the farcical news outlet ranged from students to college administrators to world leaders.

Hermon told The Simpsonian’s Blake Willadsen last year, “I think satire is important because Simpson is kind of down right now. With the layoffs and everything and the lack of funding around campus, people can have a sour attitude toward Simpson. I think just being funny and trying to make people smile can really help build the self-esteem of the school.”

Unlike many other satirical publications, Hermon said he was worried about offending others.

“We have a lot of political science majors read our stuff,” he said. “What some people think is funny in politics might not be funny to others. It’s finding that balance. Where can we be a little more crude?”

Hermon added he doesn’t like confrontation, though he’s experienced it before as a community adviser.

“If you start offending a ton of people, you won’t have an audience,” he pointed out.

The online-only publication became a form of alternative entertainment for homebodies. Instead of “reporting” on campus events, the content became even more nonsensical, whether it be depicting Simpson College President Jay Simmons in a facetious light or alleging the Campus Activities Board of stealing boards and flex.

So, what makes a “good” Acorn story?

The most shared posts, he said, are ones that contain newsworthy events, such as budget cuts forcing cross country runners to wear shorter shorts or students forming a hockey team on Simpson’s sidewalks.

Through research, Hermon also found stories with an eye-catching image generates traffic to the website, thus the need for graphic design and photography.

Though articles appear days after an event, which eliminates the timeliness aspect of news, the parodied version of a story nonetheless fuels discussion about the topic.

Hermon admitted his involvement with the Acorn has dwindled this past semester, as is evident in the lack of qualitative posts.

With graduation nearing, Hermon is busy being an intern in the office of marketing and public relations and filling out job applications.

When asked about the future of the Acorn, Hermon said, “I’m a little nervous about it because I did all the graphics for it. I want other people to learn how to do graphics and video more. People just have to learn on their own. I’m willing to teach, but you have to have people interested first.”

“I know The Simpsonian is going to last, whereas after I’m gone and especially after Robert is gone, who knows where it’s actually going to be or if it’s going to be a club anymore,” he said.

While investing a hefty portion of his time to the Acorn, Hermon said his knowledge of graphic design, Photoshop, Final Cut Pro X, writing and leadership increased and is something he hopes to put on a resume for future employers.