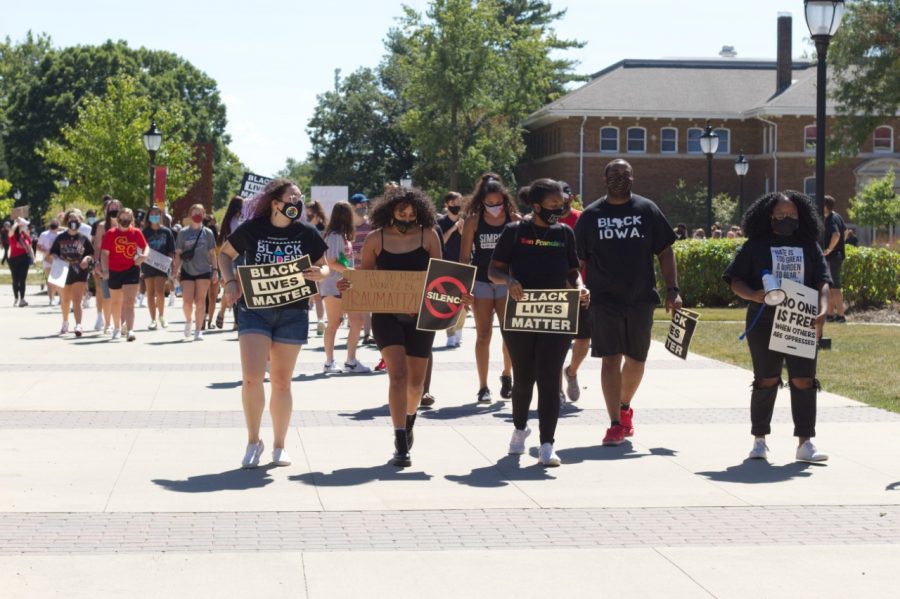 by Alyssa Craven and Amelia Schafer

Simpson College’s Black community is tired and more than ready for change. After repeated racist incidents, Black students are demanding change on campus.

On Sept. 2, a protest for racial justice took place outside Kent Campus Center.

From sunrise to sunset, students sat outside of Kent and voiced their concerns about the administration.

The protest was brought on by an anonymous individual with the screen name, Emma, that hijacked the Black Student Union’s Zoom call which served as their first meeting of the year, Sept. 1. The individual used hate speech and chanted racial slurs during the call.

“..A lot of crap has gone on this campus,” Taylor Willams, President of BSU, said in her speech. “But I have never felt fully unsafe, and last night someone took that away from me. I was in my own room scared to go to sleep that somehow someone was going to bust into my room and hurt me in some way. I’ve never had that feeling in my life.”

According to the President of Simpson College, Marsha Kelliher the Indianola Police Department was contacted to assist with the incident.

“I am appalled the incident took place and provide my full assurance that this event will be treated with the utmost urgency,” said Kelliher in an email.

The student body created a list of demands that included: compensation for the trauma people of color have endured on Simpson College’s campus. The immediate expulsion and/or a lawsuit for whoever was behind the BSU Zoom attack. Immediate banning of all confederacy related t-shirts, hats, etc. and racist symbolism. Every single demand under every race-related resolution met. The addition of Black counselors and unlimited counseling sessions provided for students of color. Guarantee of protection for students of color. The creation and hiring of a Black professional to deal with race-related issues on Simpson College’s campus, as well as not disbanding pro-Black Lives Matter protests on campus.

Classes were canceled on Sept. 2 by the Academic Dean John Woell in light of the protests.

“..I will be outside in support of our students of color as much as I can,” Woell said in an email. “I encourage you to join me. Together, we can live out our inclusivity statement and create the socially just world our mission calls us to build.”

Over 350 students, faculty and staff attended the protest.

“I would have never expected Simpson would look like this on a day like this,” Casie Redhage said in her speech. “It means so much to me that I can look out and see all these people who took the time to come and support their POC on campus.”

Several chants happened during the early hours of the protest. No justice no peace, hey hey ho ho these racists must go, Black Lives Matter and Black Students Matter were just a few of the chants sung by students.

Junior Micah Zimmerman began the speaking portion of the protest by singing “Make them Hear You” from the musical “Ragtime” with lines such as, “How Justice was our battle, and how Justice was denied. Make them hear you.”

Afterward, students and alumni spoke about their views on how Simpson handles racial incidents.

“All three years that I have been here, there has been some sort of race incident that has either happened to me or on a bigger level and almost nothing has the admin actually done about it,” Redhage said in her speech.

Assistant Director of Admissions and 2008 alum Emili Radke echoed similar thoughts, describing a similar situation that happened to her in 2005.

“I think that administration needs to do something for our students of color,” Radke said.

In her speech, Multicultural Student Alliance and S.A.R.A. President Karrecia Crawley described her experiences this past week on campus as a minority.

“I’m tired, I’m exhausted I’ve had my fourth panic attack in the past 48 hours from being on this campus,” Crawley said. “Half of you saw me run in here because professors on campus think that it’s appropriate to argue with me when I’m asking you to cancel your class. I can not focus when I’m sitting in class and I don’t know when the next thing is gonna pop up.”

Crawley explained her feelings of fatigue in having spent her past four years at Simpson trying to make a difference to no avail.

“I try to be nice all the time,” Crawley said. “I stay in my meetings and I hold my tongue while faculty and staff tell me they don’t think anything can be done because the school does not put enough money into it. I asked for racism bias training online my sophomore year and was told it’s too hard to make it mandatory. Everyone needs to step up because I’m done stepping up, I did my job. It’s your turn.”

“I don’t want you guys to act like this protest didn’t happen in three days,” Clayburn said. “This is step one on this campus. Share these petitions, donate money if you are able, read books and articles.”

David Robinson, SGA senior senator, said, “I would like to ask us all to look to the future. To understand the further battles ahead of us, because there is a mountain that we have to climb. An absolute mountain, that we cannot imagine.”

Students then marched around campus, only to be met with opposition as two men in a gray truck drove through the crowd as they marched down West Clinton Avenue and shouted, “Trump 2020.”

The march was finished in front of Hillman Hall.

President Kelliher released an email at 9:57 p.m. saying that Cabinet met and made the following plans. Simpson will review the Strategic Plan for Diversity, Equity and Inclusion. Tomorrow Senior Vice President and Academic Dean John Woell will send an email detailing the next steps for faculty committees, directors, and working groups.

Tonight, Dean of Students Luke Behaunek will send out an email to all students about the conduct process for any student found to be responsible for the hate crime.

The President also stated she will be releasing a full statement tomorrow morning as well as providing the student body with daily updates on the progress being made by the administration.

Any information regarding the identity of the individual who hijacked the Zoom call can be reported to the school at https://simpson.edu/internal/security/report-incident.