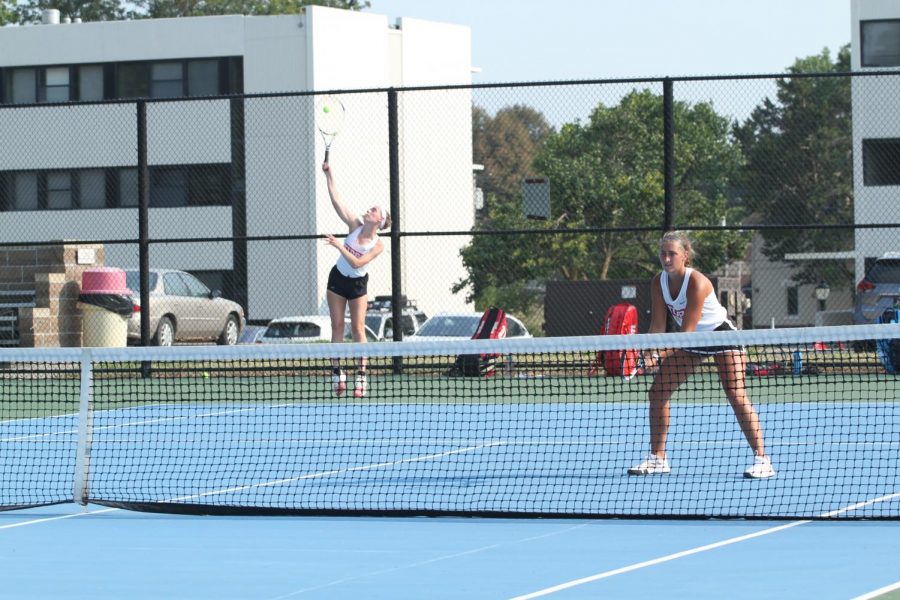 The Simpson Women’s Tennis team hopes to stay focused during the COVID-19 pandemic and get off to a good start to their season.

The Storm is coming off a 3-7 Spring record with all three wins coming in conference play. The last five months have been difficult for all sports, but third-year head coach Faith Bliss has made sure her team has stayed positive and hopeful throughout the off-season.

“We have to remember that eventually, we will get back on the courts and that we will have a season,” Bliss said. “Tennis is one of the most socially distant sports, so I was pretty confident that we would have a season.”

With Simpson College still in the orange phase, all students must do everything they can to follow the rules and guidelines put in place to stay safe. However, practices for the team don’t look much different from a year ago.

The last five months of preparation for junior Emily King, on the other hand, has looked a little different than past years.

“My family had just moved to Missouri, and they pretty much closed down everything, including the courts,” King said. “I also didn’t know anyone down there, so there wasn’t anyone to play with. These last two weeks of practice have been important for getting back in shape.”

Focus is one thing that didn’t waver during the last offseason for King, adding that staying locked in revolves around the love of tennis.

“Every day we get to go out and hit is a good day because we almost didn’t get to be here,” King said.

Junior Anna Wanek added that being able to practice and play games gives her more appreciation towards the sport.

“I feel thankful that we do get to go out to practice because a lot of other sports have been getting canceled and pushed back,” Wanek said. “We just have to go out and play.”

Bliss looks forward to watching every one of her players develop and play this upcoming season.

“They all have all been working very well together,” Bliss said. “We’re a lot stronger this year than we were in years past. We have a transfer Anna Wanek coming in and helps the top of the lineup, and Emily King had a strong season last year, so I expect big things from both of them.”

The Simpson Women’s Tennis team opens up their 2020 Fall season at home against Loras College Sept. 5 at 10 a.m.