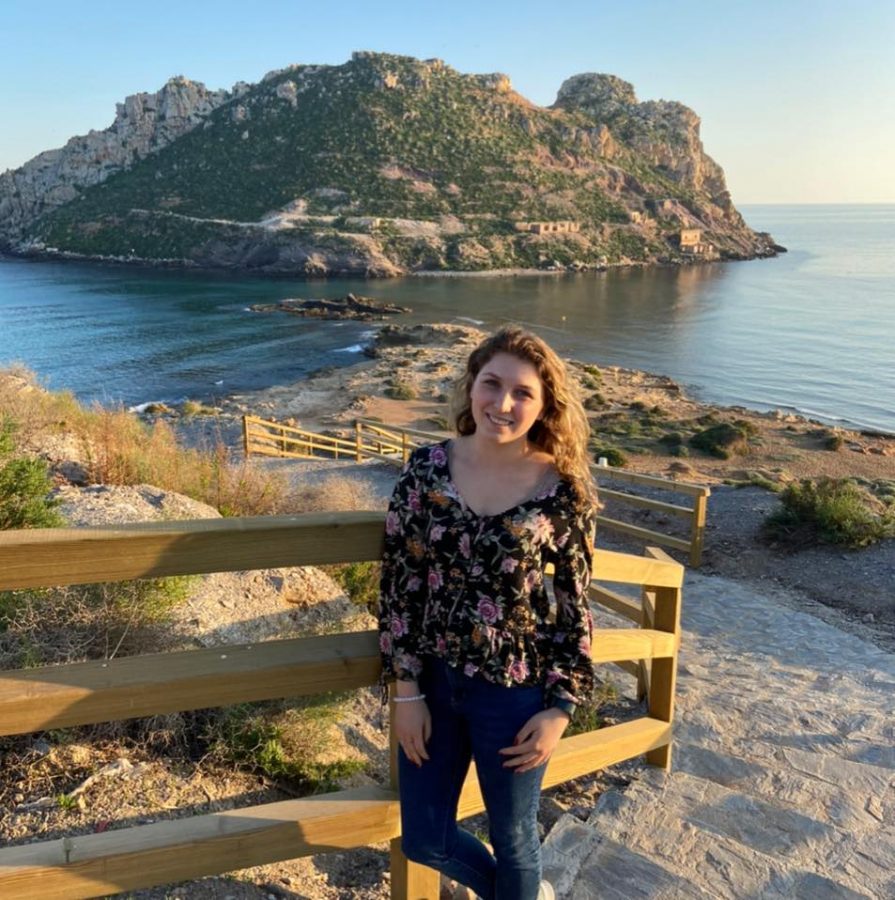 Triniti Krauss poses in front of a mountain in Águilas Spain. Photo submitted to the Simpsonian.

by Colbee Cunningham, Special to the Simpsonian

Spending a semester abroad is supposed to be a life-changing experience, full of cultural immersion, impromptu trips and lifelong memories. Instead, two Simpson students studying in Spain found themselves trapped in the epicenter of the coronavirus pandemic, with no way home.

Spanish-language students Triniti Krauss and Patricia Telthorst were studying abroad at the University of Murcia in Murcia, Spain when the coronavirus pandemic struck Europe in mid-March.

On March 12, they received two semester-altering emails: one from the University of Murcia announcing a transition to web-based learning and one from Simpson advising their return to the United States. Just two days later, Spain entered a nation-wide lockdown.

“Everything happened so suddenly,” Telthorst said. “I wasn’t worried at first because I didn’t realize the scale of the pandemic. Within the week, I received an email from Simpson instructing me to return home. At that point, my heart sank. That’s when I realized how serious the situation was.”

Spain’s lockdown, one of the harshest in all of Europe, banning its residents from leaving their houses for all nonessential reasons, including international travel. Everyone residing within Spain’s borders, including Krauss and Telthorst, were forced to obey the conditions of the Cunningham 2 lockdown. Anyone found to be defying the orders of the government could face imprisonment or a severe fine.

“I had a flight booked for the 16 of March. The nationwide lockdown was implemented and I was concerned about my driver getting arrested on the way home from the airport and roadblocks set up. I canceled the flight,” Krauss said.

While it wasn’t the semester abroad that they had originally planned for, Krauss and Telthorst intend to make the most of their remaining time in Spain. Despite being in quarantine, they are still able to experience Spanish culture and practice their Spanish language skills.

As for when they will return to the United States, Krauss and Telthorst remain uncertain. Spanish Prime Minister Pedro Sánchez intends to implement a gradual four-phase plan in lifting Spain’s lockdown. The first phase is slated to begin on May 4. Sánchez predicts that this transition to a “new normality” will take anywhere from six to eight weeks.