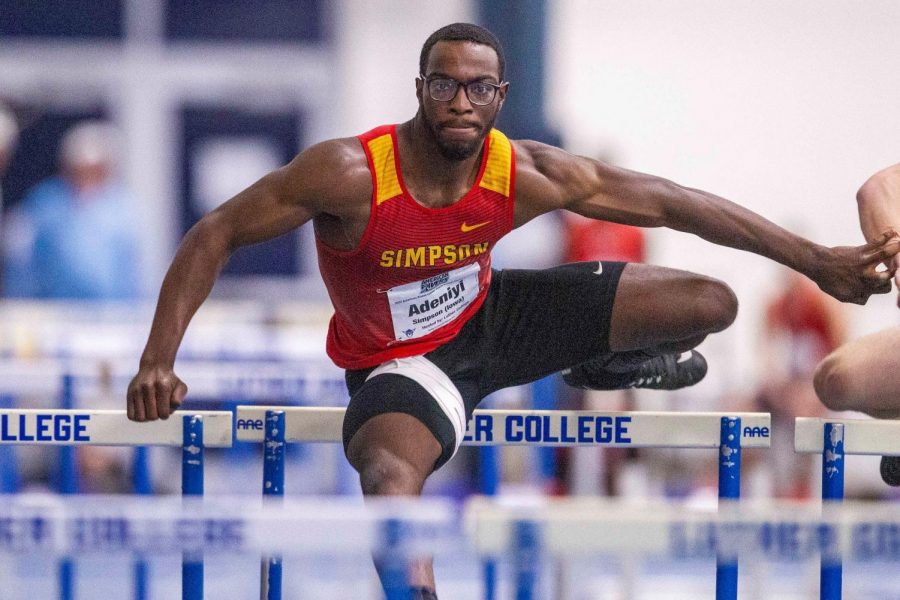 The Simpson men’s track and field team took home sixth place and the women placed ninth at the American Rivers Conference Indoor Championship on Feb. 28 and 29.

Senior Sam Adeniyi was the top finisher for the Storm over the weekend, finishing first in the heptathlon with 4,667 points. Adeniyi won four events within the heptathlon — the 55m hurdles, high jump, long jump and shot put.

“I thought the team competed well,” Adeniyi said. “We had a lot of guys set personal records.”

Adeniyi has been battling a hip-flexor injury throughout the entire month of February, which has left him out of most practices and competition. The conference championship was his first time competing in the heptathlon since Feb. 1. That didn’t stop him from setting four personal records.

“It was a phenomenal effort,” head coach Dave Cleveland said. “This is a kid who would cut off his leg if that’s what was needed to compete.”

The second-best performer for Simpson was also a senior. Austin Greenwalt placed third in the heptathlon, finishing with 4,408 points. This is Greenwalt’s second year in a row as All-Conference.

“(Greenwalt) was All-Conference last year and that was the expectation for him this year,” Cleveland said.

Spencer Moon, a freshman, finished fourth in the mile with a time of 4 minutes, 19.55 seconds, a new personal record.

Sophomore Craig Garrison finished fourth in the 55-meter finals and fifth in both the 200-meter dash and 400-meter dash.

Every race and finalist played a part in helping the men finish sixth in the conference with a score of 62.

“I think we performed to our potential,” Cleveland said.  “I was pleased with the preparation and how we competed.”

On the women’s side, Jamie Glanz was the top finisher for Simpson. She placed fifth in the pentathlon with 2,792 points. Within the event, Glanz won the high jump and finished fifth in the long jump.

Glanz also finished fifth overall in the high jump and was a part of the 4×400 relay team that finished eighth with Katelyn Mangold, Kylee Bass and Meagan Blomgren.

The 4×800 team of Abby Loecke, Sophie Hall, Cat Lucht and Mackenzie Laughlin finished seventh overall to round out the top ten finishes for the women in their ninth-place finish.

“There will always be some who are unsatisfied,” Glanz said. “But I think it as a good end to the indoor season and provided some insight on what we need to focus on improving to have a successful outdoor season.”

The women finished half a point behind eighth-placed Coe, just a couple seconds behind moving up a spot.

“We’re not far off,” Cleveland said.

Simpson is just a few places off from moving up in the conference and they have a lot of time off before their first outdoor meet on April 3.