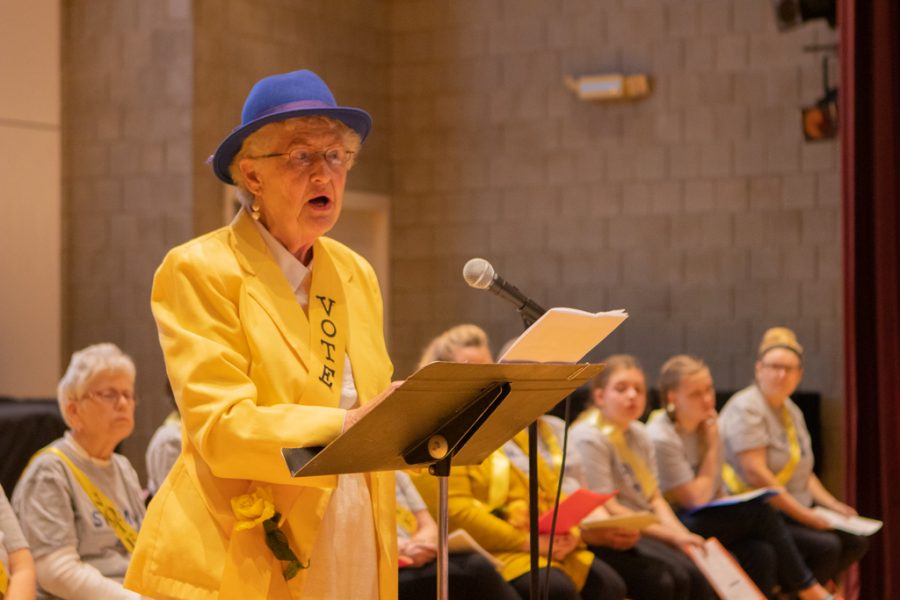 Simpson College began its Women’s History Month with two events; Wonder Women, which was put on by the American Association of University Women, and the Women in America Lecture featuring Sara Egge.

This year’s Women in America Lecture was sponsored by the Women’s and Gender Studies program, the Culver Center, Iowa History Center and Simpson Forum.

Simpson will be hosting four other Women’s History Month events over the rest of March including “My Body, My Faith, My Choice?”, “March Menstrual Madness”, “The Fight for Equal Suffrage Continues: A roundtable” and “Women’s Piece.”

About 40 Simpson and Indianola community members gathered in Leckburg Hall on Tuesday to listen to Indianola’s branch of the American Association of University Women’s production of Wonder Women.

“My life is a sheer privilege because my parents didn’t love me less because I was born a daughter. My school did not limit me because I was a girl. My mentors didn’t assume I would go less far because I might one day give birth to a child. These influencers were the gender equality ambassadors that made me who I am today. They may not know it but they are the inadvertent feminists who are changing the world today, and we need more of those,” said Leonard quoting an Emma Watson speech given at an event for the HeForShe campaign.

The readers represented each of the women and spoke about their life accomplishments. Some used minor costume pieces to highlight their character.

Around 150 Simpson and Indianola community members gathered in Hubbell Hall on Wednesday to hear Sara Egge’s lecture “Radical Women Go Back to Your Homes: The Fight for Woman Suffrage in Iowa and the Midwest.”

The Women in America Lecture event began in 1990. This lecture is the Keystone event for Simpson College’s Women’s History Month.

This year’s speaker, Sara Egge is a Claude D. Pottinger Professor of History at Centre College in Kentucky.

Egge began her lecture by telling the audience what she wasn’t going to talk about. Among this list are the leaders of the National American Women’s Suffrage Association such as Susan B. Anthony and Elizabeth Cady Stanton.

“To tell the story of women’s suffrage in Iowa and the Midwest you really have to move beyond…the words of these major leaders and focus on ordinary people living in the midwest,” Egge said. “When we do that we find an overlooked narrative. We find a history that a lot of people haven’t talked about and learned about.”

Egge highlighted the work of suffragettes in Iowa for this lecture.

In 2018 Egge published her book “Woman Suffrage and Citizenship in the Midwest, 1870-1920.” Egge’s book received the Gita Chaudhuri Prize from the Western Association Women’s Historians and the Benjamin Shambaugh Award from the State Historical Society of Iowa.